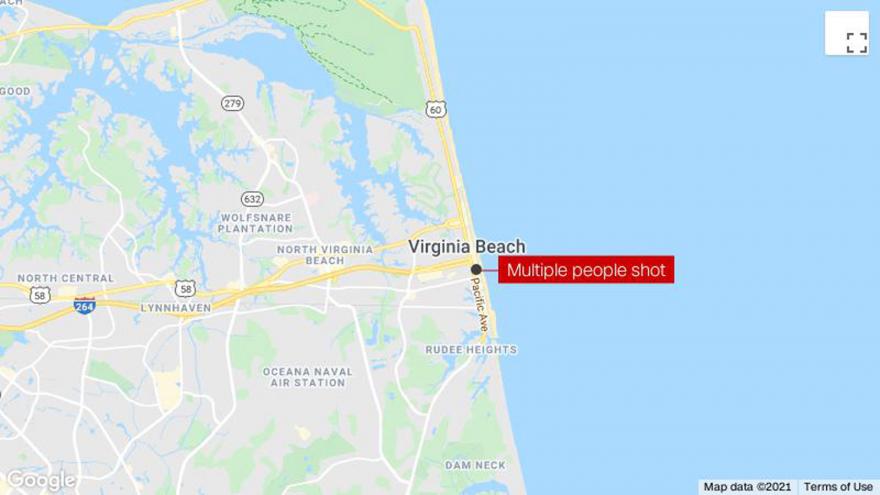 Two people were killed and at least eight were injured during shooting incidents in Virginia Beach on March 26. - Google/CNN

(CNN) -- Two people are dead and at least eight injured after shootings near the oceanfront in Virginia Beach, Virginia, police said Saturday.

While police were investigating, shots were fired about a block away, resulting in "an individual being confronted by a uniform Virginia Beach police officer," Neudigate said.

The officer shot and killed the person in what the chief described as a "police intervention shooting."

A second person was killed in a separate nearby shooting, Neudigate said. He said police do not believe it was related to the first two shootings.

In addition, an officer was hit by a car and taken to a local hospital with injuries that were not life-threatening.

No arrests had been made at the time of the briefing, but the chief said several people had been stopped and were in police custody. Their involvement was unclear.

Police did not offer a motive for the shootings or provide details on the conditions of those injured.

It said officers were patrolling the resort area when they heard gunshots. They found eight people who had to be taken to a hospital, some with injuries ranging from serious to life-threatening.

Police said a woman died at the separate nearby shooting.

In the release, police said the officer-involved shooting (OIS) was related to the first incident and was "being investigated concurrently."

The press release says the man killed by police was a suspect, though it was not immediately clear whether police believe he was responsible for injuring the eight people who were wounded.

The officer involved in the shooting is being placed on administrative assignment during an investigation, which the release said is standard procedure.