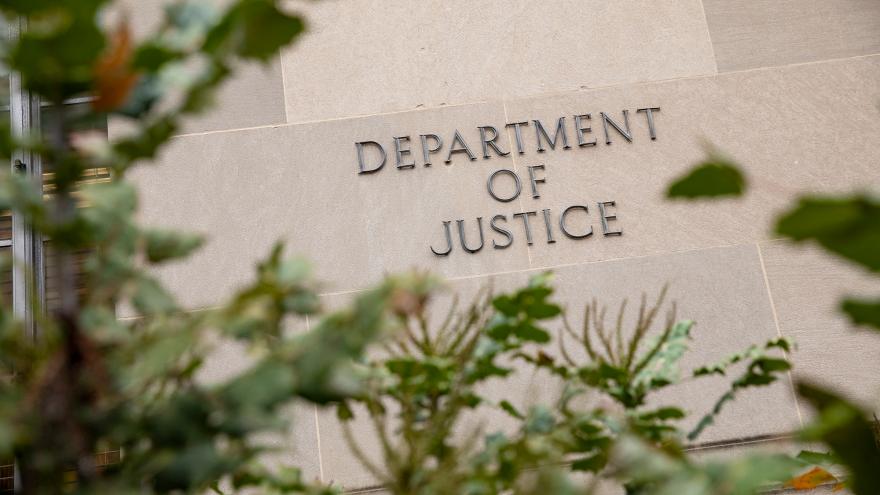 (CNN) -- Two self-proclaimed members of the "Boogaloo Bois" were arrested by federal agents after allegedly conspiring and attempting to become "assets" to a foreign terrorist organization that shared their "anti-US government views," the Justice Department announced on Friday.

Michael Robert Solomon and Benjamin Ryan Teeter were taken into custody on Thursday and will be held pending a formal detention hearing on Wednesday in US District Court in Minneapolis.

Solomon, 30 of New Brighton, Minnesota, and Teeter, 22, of Hampstead, North Carolina, caught the eye of the FBI after they attended a George Floyd protest in late May. according to a news release from the Justice Department.

Witnesses told federal authorities that they were both seen carrying a firearm and discussed being members of "Boogaloo Bois" and their subgroup called the "Boojahideen" that had intentions of "committing acts of violence against police officers" and had goals of "overthrowing the government and replacing its police forces," according to the criminal complaint.

They allegedly discussed raiding a National Guard Armory to steal weapons and "bombs" and would seek out "assassinating" white supremacists while someone else recorded it, according to the criminal complaint.

At some point in June, federal authorities learned from a confidential informant and in audio-recorded conversations that Solomon and Teeter told someone they believed was a member of Hamas that they "desire to employ themselves as 'mercenaries' " for the terrorist organization, prosecutors said.

Solomon told an undercover FBI agent who posed as a senior member of Hamas that he and Teeter "would be an asset to Hamas" because "we've got to be pretty valuable because two American-born white boys, right? We can move around like nothing. I can take anything anywhere," according to the criminal complaint.

Solomon and Teeter allegedly told the undercover FBI agent that they wanted to destroy "government monuments, raiding the headquarters of a white supremacist organization in North Carolina, and targeting politicians and members of the media," prosecutors said.

They also discussed a self-defense plan.

"If I have to shoot someone I'm not going to call the cops and stick around," said Teeter.

"If you're carrying for self-defense you're going to call the cops and go through the process," Solomon responded.

"If we are able to accomplish our goals, the US would be f***ing done," Solomon said to the undercover, according to the criminal complaint.

In one of the taped conversations, Solomon said he didn't want to blow up courthouses but wanted to "take down twenty senators while they're f***king playing baseball," according to the criminal complaint.

They also said they had the ability to manufacture unmarked, untraceable and unregistered parts for guns and weapons with $700 of equipment, according to the criminal complaint.

Attorneys were not listed for them.

Hamas denied any connection with the group in a statement on Saturday.

"The Islamic Resistance Movement - Hamas denies knowledge of the 'Boogaloo Bois' group or any of its members, and denounces the US administration attempt to link between the movement and any of these group members" Hamas said in a statement.

"We, in Hamas, are strongly aware of the oppression suffered by people of color in America. We express our solidarity with them and hope one day their rights will be acknowledged, as well as our inalienable rights."

This story has been updated Sunday with a statement from Hamas.