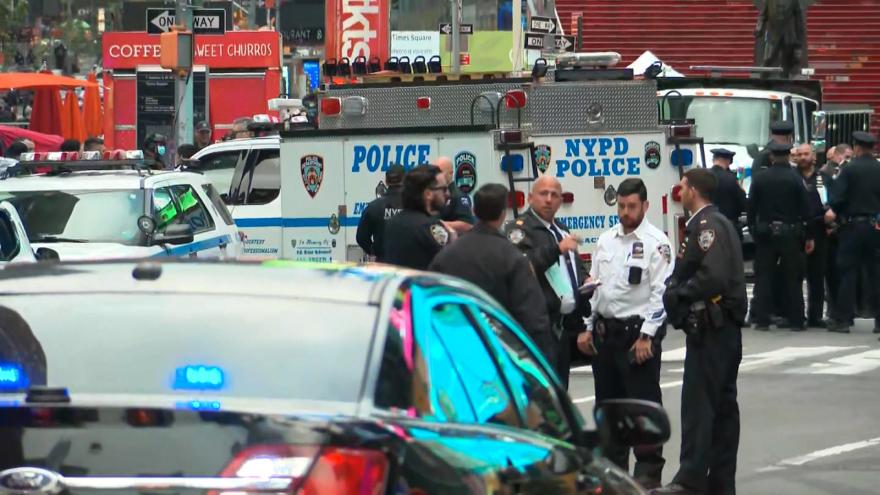 Two women and a 4-year-old girl, believed to be innocent bystanders, were wounded in a shooting at New York\'s Times Square on Saturday, according to New York police.

(CNN) -- Two women and a 4-year-old girl, believed to be innocent bystanders, were wounded in a shooting at New York's Times Square on Saturday, according to New York police.

Shots rang out at about 4:55 p.m. near 45th Street and 7th Avenue, and police officers already in the area responded, New York Police Department Commissioner Dermot Shea said during a news briefing.

The 4-year-old girl from Brooklyn was shot in the leg. She was with her family at the time of the shooting and is expected to undergo surgery at Bellevue Hospital, Shea said.

A 23-year-old tourist from Rhode Island also was shot in the leg. The third victim is a 43-year-old woman from New Jersey who was shot in the foot. Both women were taken to Bellevue Hospital for treatment, according to the Fire Department of New York.

Multiple witnesses told police that the shooting stemmed from a dispute on the street involving two to four or more males and that during the dispute, at least one person pulled out a gun, Shea said.

A preliminary investigation showed that the three victims were unknown to one another and were innocent bystanders, Shea said.

Police are looking for the persons involved and believe that there is at least one shooter, Shea said. The NYPD posted a video and a photo to Twitter of at least one person wanted in connection with the shooting.

A gun has not been recovered but police found three shell casings from a .25 caliber gun at the scene, Shea said.

Shooting incidents and gun violence exploded in New York last year and have continued to surge in 2021. According to the NYPD's city crime statistics, shooting incidents this year through May 2 have skyrocketed 83% over the same period a year ago.

Correction: An earlier statement by NYPD regarding whether the Statue of Liberty was open was incorrect and has been removed.