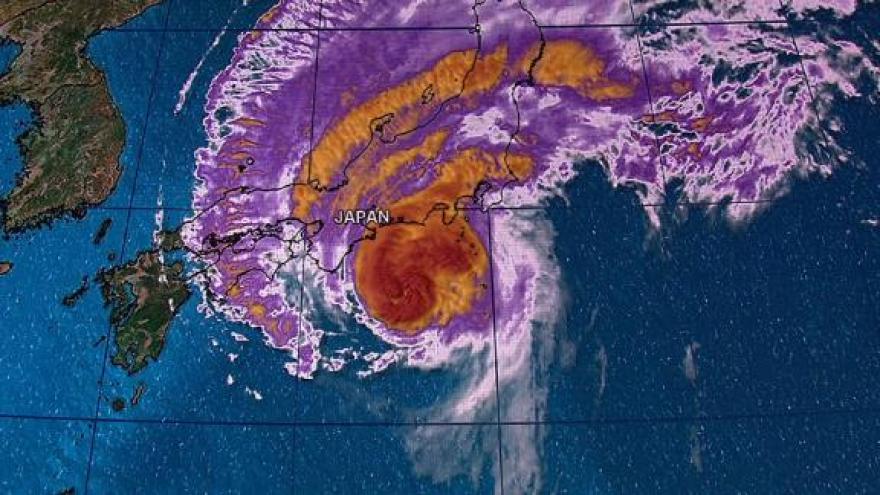 (CNN) -- Typhoon Hagibis made landfall Saturday night local time, as the country braces for hurricane-force winds which has killed one person and injured 33.

The Japanese Meteorological Agency (JMA) said the typhoon made landfall just before 7 p.m. local time on the Izu Peninsula, southwest of Tokyo.

The agency called for the public to remain vigilant for rain and gusts of wind, after it issued an "Emergency Weather Warning (Level 5)."

The warning was issued for towns and cities in 12 prefectures including areas in Tochigi, Ibaragi, Fukushima, Miyagi, and NIigat.

"It is a level 5 situation; some sort of disaster may have already taken place," said JMA weather forecaster, Yasushi Kajiwara. "People are strongly advised to act to protect their lives right away."

Japan's Fire and Disaster Management Agency (FDMA) confirmed 33 people had been injured and that one person had been killed in Ichiara City. It also said one person was missing in Gotenba City.

The storm, which comes as the country hosts the Rugby World Cup, also meant that two matches -- England-France and New Zealand-Italy -- had to be preemptively canceled. World Cup authorities also said they were evaluating whether additional matches Sunday would need to be called off.

Evacuation advisories have been issued throughout much of the Tokyo region, affecting tens of millions of people. The Japanese capital is in lockdown, with usually busy streets abandoned amid torrential rain.

Meanwhile, the Ministry of Land, Infrastructure, and Transport said it was considering discharging water from three dams due to heavy rain which could possible cause flooding downstream.

The storm had weakened as it approached Japan but still remained highly dangerous, with maximum winds of up to 195 kilometers per hour (122 mph) -- equivalent to a Category 3 Atlantic hurricane.

All flights to and from Tokyo and nearby airports have been canceled until at least Sunday morning. All bullet trains between Tokyo, Nagoya and Osaka are also canceled, as are most non high-speed trains.

At least five other people, including three children, where injured as the tornado swept through the city, which lies around 30 kilometers (18 miles) southeast of Tokyo, fire authorities said.

While authorities made clear that the decision to cancel games was necessary to ensure the safety of players and fans, many were critical of the tournament's inability to reschedule games and apparent unpreparedness for the extreme weather -- despite the World Cup being held during typhoon season.

In canceled games, two points will be awarded to each team, in line with tournament rules. This could have an effect on who qualifies for the next round of the competition, particularly in Pool B, which includes hosts Japan.

While Ireland's Pool B match against Samoa will go ahead Saturday in Fukuoka prefecture, no decision has been made around Japan and Scotland's crunch match on Sunday, due to take place in Yokohama, a city south of Tokyo which lies in Hagibis' path.

A win for Scotland would see it draw level on points with Japan, after which bonus points -- awarded for scoring four or more tries or losing within seven points -- would come into play to decide who reaches the quarterfinals.

A cancellation -- and a draw -- would see Japan qualify in second place and face New Zealand in the quarters. Ireland would top the group and face South Africa in the final eight if, as expected, it defeats Samoa. If the match goes ahead and Japan wins, it could take the theoretically easier game against the Springboks and leave Ireland to face the All Blacks.

Meanwhile, all activities scheduled for the Japanese Grand Prix were canceled Saturday, according to Formula One. Efforts are underway to ensure the race proceeds Sunday if the weather improves.