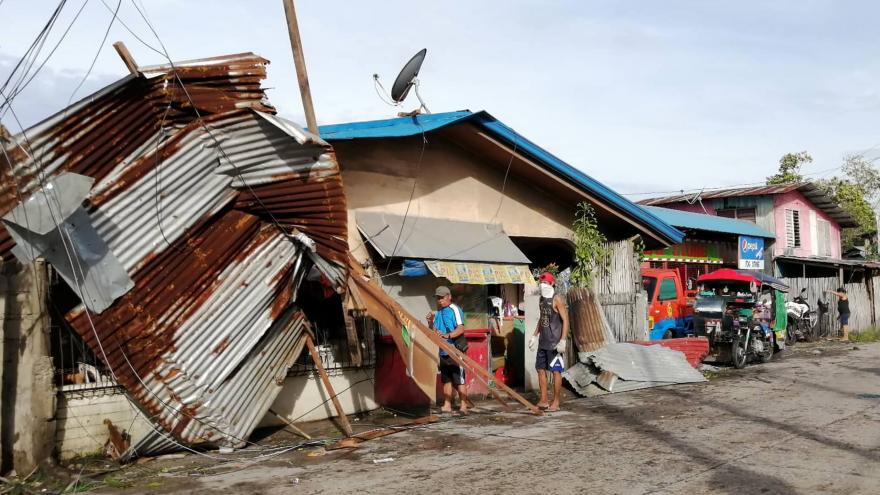 (CNN) -- A typhoon that lashed the central Philippines on Christmas Day has killed at least 16 people and caused damage to homes and tourist areas.

TyphoonPhanfone, known locally as Typhoon Ursula, first made landfall on Eastern Samar province on Tuesday, bringing heavy rain and storm surges. It hit as the equivalent of a Category 1 hurricane, packing sustained wind speeds of 150 kilometers (93 miles) per hour, with gusts of 195 kilometers (121 miles) per hour.

Phanfone continued to sweep west across the islands of the Eastern Visayas region, southern Luzon and Western Visayas on Wednesday, toppling electricity pylons and trees, tearing off roofs, damaging homes and causing widespread travel disruption over the busy Christmas period.

The region is majority Catholic and many people were preparing for family celebrations when the typhoon hit.

On Thursday, the Regional Disaster Risk Reduction and Management Council reported that 13 people had died in the Western Visayas region, while the Office of Civil Defense said three had died in Eastern Visayas, according to CNN affiliate CNN Philippines.

CNN Philippines had previously reported that national and local agencies had announced 21 deaths. That figure has since been revised as agencies attempt to verify the number of those affected.

Two of the victims were electrocuted and one was hit by a falling mango tree, officials said.

One of the victims, 70-year-old Carlos Yu Beltran, drowned when his house was swept away in a storm surge in Balangkayan town on Samar, according to the government's Philippine Information Agency (PIA).

"Let's hope and pray that they are safe," Eastern Samar Governor Ben Evardone said in a statement.

Around 2,351 people have been affected by the typhoon and 1,654 people were taking refuge in evacuation centers, according to the Philippine national disaster management agency, NDRRMC. A total of 58,400 people were pre-emptively evacuated ahead of the typhoon, the NDRRMC said.

The agency said 87 cities and municipalities experienced power outages, and by Thursday, 24 of those have had power restored.

Phanfone followed a similar path to the devastating Typhoon Haiyan in 2013, which was one of the most powerful storms on record and killed at least 6,000 people.

The full extent of the damage is yet to be determined as power and communications in several areas remain cut off.

Some tourist areas, including the popular resort island of Boracay, were also damaged on Wednesday. The nearby Kalibo International Airport was temporarily closed and flights canceled after the typhoon damaged the roof of the terminal building, according to an advisory from Philippine Airlines.

Thousands of people who were traveling over the Christmas period had their flights and ferries canceled due to the typhoon.Some 115 domestic flights were canceled and more than 15,700 passengers left stranded, according to the NDRRMC.

The Philippines gets hit by more typhoons than any other country, according to the Philippine Atmospheric, Geophysical and Astronomical Services Administration (PAGASA).

Earlier this month Typhoon Kammuri, the twentieth to hit the country this year, killed 13 people and damaged more than 8,000 houses.

On Thursday, Phanfone was tracking over the South China Sea with winds of a 150 kilometers (93 miles) per hour. The storm is expected to maintain typhoon intensity for at least the next 24 hours as it moves westward, but will weaken to a tropical depression before making landfall in northern Vietnam on Sunday, according to CNN meteorologists.

This story has been updated to include a revised total death toll.