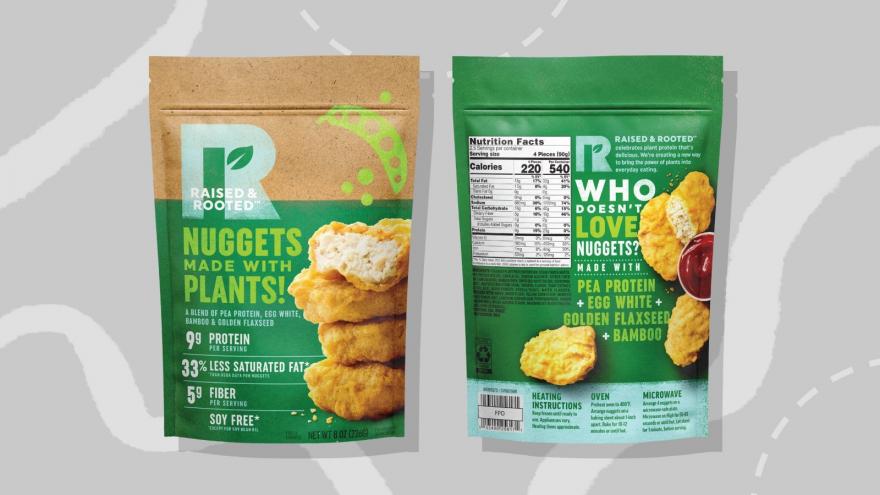 The chicken-free nuggets are made with egg whites. Source: Tyson/CNN
By Danielle Wiener-Bronner, CNN Business

(CNN) -- Tyson, one of the world's biggest meat producers, is entering the alternative meat space. It's not what you think.

The company said Thursday that it plans to launch a line of chicken-free (but not egg free) chicken nugget alternatives, as well as burger patties made with a combination of beef and plants. None of the products, which will hit shelves later this year, are vegan. Tyson said it plans to roll out other protein alternatives in the future.

Tyson is hoping that protein-conscious, flexitarian eaters will be interested in the new products.

"Today's consumers are seeking more protein options," said Noel White, president and CEO of Tyson Foods, in a statement. "So we're creating new products for the growing number of people open to flexible diets that include both meat and plant-based protein."

Tyson's new meatless chicken nuggets will launch under a new brand, Raised & Rooted. The nuggets are made from pea protein, egg white and flaxseed and bamboo fiber, and are slated to hit shelves later this summer. The Raised & Root blended patty is made with 90% lean angus beef, as well as pea protein, and will be available in the fall. Tyson recently introduced blended sausages and meatballs, made with bacon, chicken, vegetables, barley, lentils and quinoa among other ingredients, under its existing Aidells brand.

Perdue, a poultry-processing company, also recently introduced a new type of blended protein product. On Wednesday, the company launched a line of chicken nuggets, tenders and patties that are blended with vegetables.

While Tyson and Perdue are exploring adding vegetables to meat, plant-based protein companies Beyond Meat and Impossible Foods are making products that are meat-like, but made without animal products.

Beyond and Impossible make plant-based versions of meat that taste, look and cook like the real thing. They are designed to appeal to meat eaters, though they are free of meat. And they are making a play not only for customers who are looking to eat healthier, but also ones who want to reduce their impact on the planet.

Both Beyond and Impossible have seen demand for their product spike. Beyond reported first-quarter sales of $40.2 million, up 215% from the same period a year before, and Impossible, which doesn't release exact sales figures, says its sales have spiked 50% since the launch of its new patty.

Tyson may be betting that customers who seek out Beyond and Impossible products will be interested in its own alternative, as well. Tyson used to have a stake in Beyond, but has exited the deal.

"Tyson Ventures is pleased with the investment in Beyond Meat and has decided the time was right to exit its investment," the company said in a statement obtained by CNN Business last month. "Beyond Meat provided an early opportunity for Tyson Ventures to invest in plant-based protein products that many consumers are seeking."