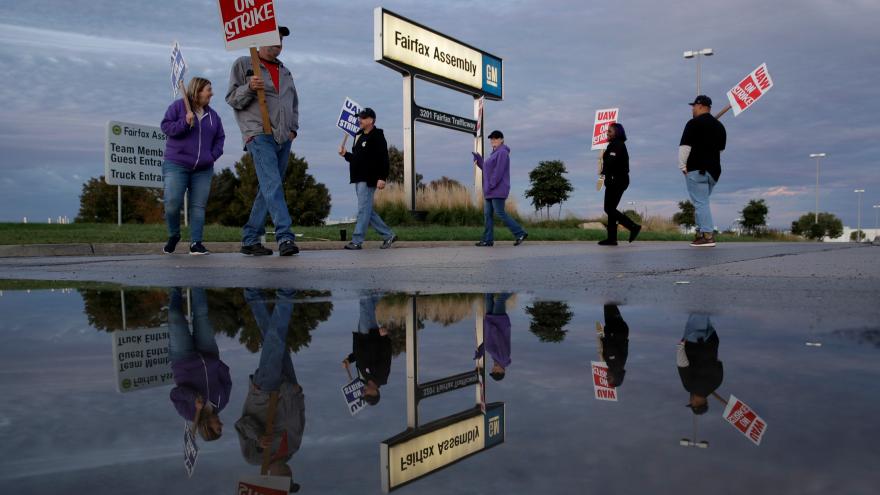 (CNN) -- As the United Auto Workers union strike against General Motors reached the end of its fourth week Sunday, the union moved to raise the level of financial support for nearly 50,000 GM workers who walked off the job.

The union has been paying $250 a week in strike benefits since forthree weeks. It announced Sunday it was raising the benefit to $275 a week. And for strikers at GM and Aramark, an outside contractor providing maintenance services at GM plants whose hourly employees are also striking members of the UAW, the union lifted a cap on the money they could earn from outside jobs and still get the full benefit.

Typically, once a worker on strike reaches the same level of outside pay as their strike benefit, each additional dollar of pay reduces the strike benefit by a dollar. In other words, if a striker was making $260 a week in a second job, he or she would have had strike benefits of $240 rather than $250 a week under the previous terms.

Strike benefits and most second jobs still only cover a fraction of normal GM wages. The average pay for a veteran GM hourly worker is more than $30 an hour.

The strike began September 16, with GM workers walking out over pay, profit sharing, job security and GM's use of temporary workers.

The union announced late Friday it had presented a new comprehensive offer to management, and the two sides have spent the weekend holding follow-up negotiations. But there was no immediate word of a deal by mid-afternoon Sunday.

A source close to the UAW said that there is talk some strikers may start leafletting GM dealerships nationwide on Monday. GM dealers, who are independent businesses, have continued to sell GM cars and trucks, working through a larger than normal inventory that GM produced in anticipation of a possible strike.

For most auto dealers though, new car sales are the least profitable part of their business, with service and used car sales producing the greatest level of profit.

The plants being struck are in Allentown and Middletown, Pennsylvania, Jacksonville, Baltimore and two plants in Hagerstown, Maryland.

Mack is owned by Volvo Truck, which is a separate company from the Volvo car brand. Volvo Truck management issued a statement saying that it had been making progress in talks with the union and that it is the only maker of heavy trucks that assembles all of its trucks and engines for the North American market at US plants, and that it competes with manufacturers that have plants in less expensive labor markets.

"We are surprised and disappointed that the UAW decided to strike, rather than to allow our employees to keep building trucks and engines while the parties continued to negotiate," said Mack Trucks President Martin Weissburg.