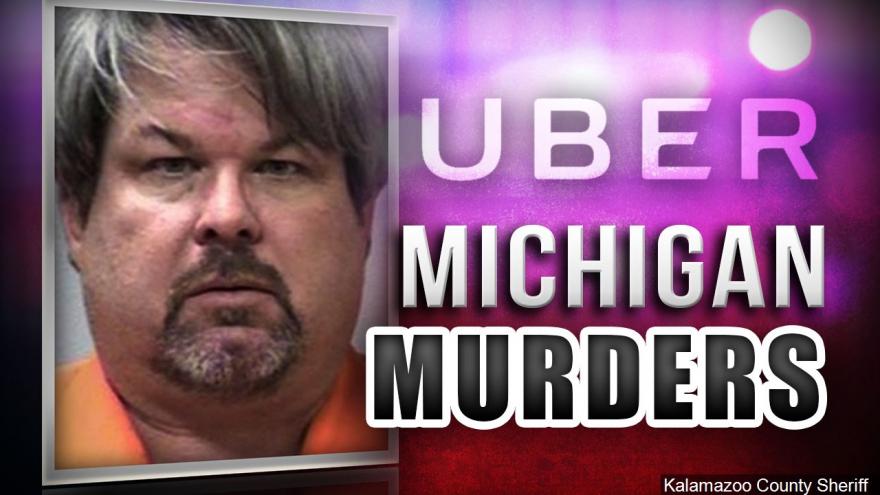 (CNN) -- Nearly three years after driving an Uber around Kalamazoo, Michigan, and randomly shooting and killing six people, Jason Dalton was sentenced Tuesday to life in prison without parole.

Dalton, 48, pleaded guilty last month to killing six people and wounding two others in a series of random shootings around the southern Michigan city over five hours on February 20, 2016. In between the shootings, he picked up and dropped off passengers as an Uber driver.

The shootings occurred on a Saturday evening in three different parts of Kalamazoo. He first shot Tiana Carruthers, then 25, in front of her children in an apartment complex parking lot.

Four hours later, he killed Richard Smith, 53, and his son Tyler Smith, 17, at a car dealership. He then opened fire in the parking lot of a Cracker Barrel restaurant, killing Barbara Hawthorne, 68, Mary Lou Nye, 62, Mary Jo Nye, 60, and Dorothy Brown, 74, and wounding a 14-year-old girl.

"These were very deliberate killings. This wasn't hurried in any way, shape or form," prosecutor Jeffrey Getting said at the time. "They were intentional, deliberate and I don't want to say casually done. Coldly done is what I want to say."

The shootings put a heightened focus on Uber and its protocol for approving drivers, who are considered independent contractors and not employees. A CNN investigation last year found that ride-sharing companies Uber and Lyft have approved thousands of people who should have been disqualified because of criminal records, according to state agencies and lawsuits.

Dalton passed a background check and had no criminal record.

"For all intents and purposes, he was your average Joe," Kalamazoo Public Safety Chief Jeff Hadley said at the time. "This was random."

At Tuesday's sentencing hearing, family members of the victims gave statements as Dalton sat quietly in an orange prison outfit.

Michigan does not have the death penalty, and state law mandates that first-degree murder be punished with life in prison without the possibility of parole.

Emily Lemmer spoke about the difficulty of living without her father and brother, particularly during her recent wedding.

"Every day since I woke up to half my family being gone has been a living nightmare," Lemmer said through tears. "Nothing feels right and every day is a constant painful struggle, the same cycle of waking up to the chilling reality that half my family is gone."

Dalton's disengaged presence Tuesday contrasted with a court hearing months after the shooting when he interrupted Carruthers with rambling statements. He later attempted to stand up in court, and court officers restrained him and dragged him out of the courtroom.