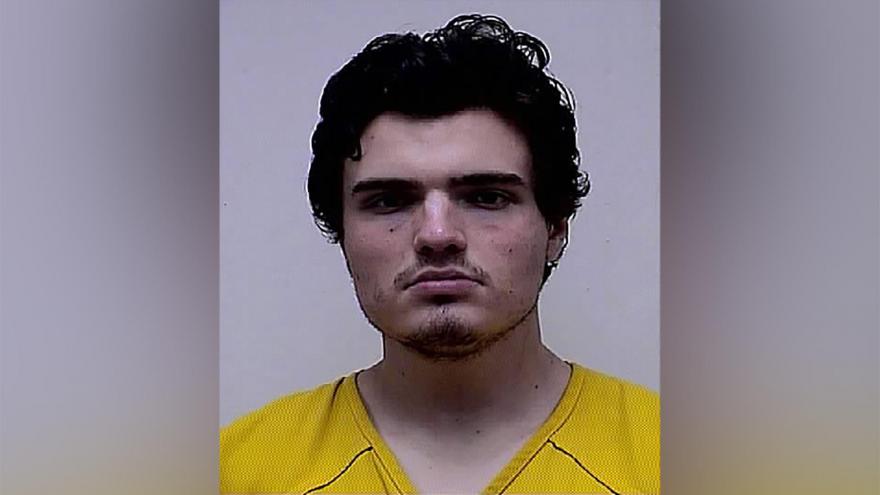 Peter Manfredonia, 23, was arrested after a six-day manhunt stretching from Connecticut to Maryland.

(CNN) -- An investigator who was being briefed on Peter Manfredonia's description and height on Wednesday night turned and noticed the murder suspect just 20 feet away, leading to his capture, Connecticut State Police said.

Manfredonia, a 23-year-old University of Connecticut student, is accused of killing two people and kidnapping another, and he had led police on a six-day manhunt stretching from Connecticut to Maryland. Police had described him as about 6-foot-4-inches tall and wearing red sneakers.

But the manhunt ended in Hagerstown, Maryland, on Wednesday night when an investigator being briefed on his description pointed to a man of that height nearby, and the detective delivering the briefing noticed his red sneakers, police said. The side view profile of him also matched photos of Manfredonia, according to Connecticut State Police Lt. Michael Pendleton.

The team immediately went over to Manfredonia with guns drawn and told him to get on the ground, and he cooperated.

"At that point he went to the ground, he did not resist, and absolutely no force was used" to arrest him, Pendleton said at a press conference Thursday.

Manfredonia also willingly walked detectives and agents over to a black bag with a weapon in it about 200 yards away from the arrest site, Pendleton said.

A motive for the attacks is still unclear. The senior at the UConn joint School of Engineering/School of Business Management and Engineering for Management program has been struggling with mental health concerns and was receiving support from his family and therapists, said Michael Dolan, an attorney for Manfredonia's family.

The family told CNN through their attorney "they are relieved that Peter brought this to a peaceful conclusion."

Manfredonia represented himself in a court hearing on Thursday and waived his extradition, surrendering voluntarily to be moved to Connecticut. He joined the hearing via video conference from jail and answered on his own behalf, declining representation.

The spree of alleged crimes began in Willington, Connecticut, last Friday, when a 62-year-old man was killed and another injured "with an edged weapon," Connecticut State Police said in a statement. Within hours, Manfredonia was identified as a suspect.

The deceased man, Theodore DeMers, died of sharp force and chop injuries of the head, torso and extremities, according to Dawn Garcia, processing technician with the Connecticut State Medical Examiner's Office. The other man is in stable condition, state police said.

On Sunday morning, police learned that a Willington home had been invaded, and Manfredonia became a suspect. He is believed to have stolen multiple firearms and a vehicle, state police said.

Hours later, police received a 911 call requesting a well-being check for a home in Derby, Connecticut. Nicolas Eisele, a 23-year-old who graduated from the same high school as Manfredonia in 2015, was found dead there from a gunshot wound to the head, Garcia said.

Another person was abducted from the home where Eisele was found, police said, and a Volkswagen Jetta was stolen. That person was later found unharmed in Paterson, New Jersey, and identified Manfredonia, police said. The Volkswagen that Manfredonia was believed to have been driving was found in New Jersey near the Pennsylvania border.

He was taken into custody by the US Marshals and the FBI, according to a law enforcement official.

"Ted lived an amazing life and touched many people along the way. His love for life was infectious, his strength displayed living through a 40 year battle with Crohn's Disease," the family said.

"As his family, we will forever cherish the memories we made with him in his 62 years of life. He was always so proud of his family and it's our time now to be proud of him - we believe that his heroic actions and good citizenship may have saved the lives of others."