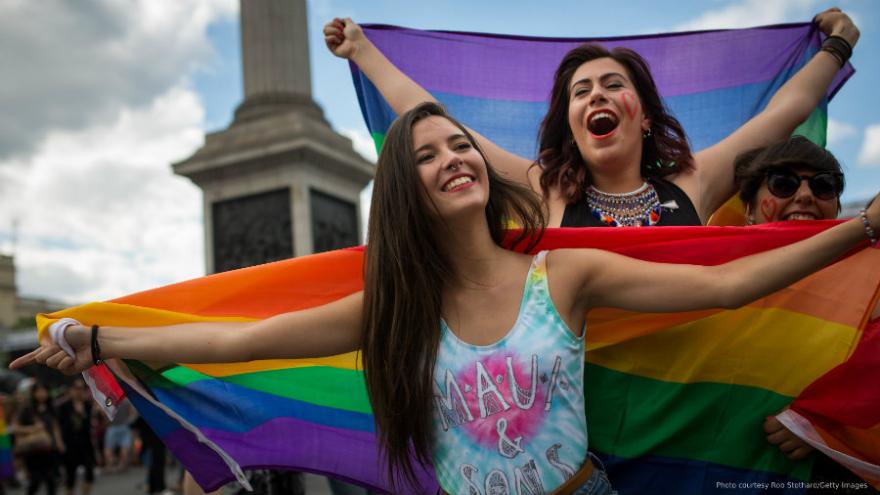 (CNN) -- The British government is planning to outlaw so-called gay conversion therapy as part of an effort to counter intolerance and discrimination.

The £4.5 million initiative follows a survey of LGBT people that found 2% of the 108,000 respondents had undergone conversion therapy while 5% had been offered it.

The survey also cast a light on the discrimination faced by lesbians, gays, bisexual and transgendered people, with more than two-thirds of participants recording they avoid holding hands with a same-sex partner in public out of fear people will react negatively.

In a statement, British Prime Minister Theresa May said she had been "struck by just how many respondents said they cannot be open about their sexual orientation or avoid holding hands with their partner in public for fear of a negative reaction."

"No one should ever have to hide who they are or who they love," she said. "This LGBT action plan will set out concrete steps to deliver real and lasting change across society, from health and education to tackling discrimination and addressing the burning injustices that LGBT people face."

The announcement of the new initiative, which coincides with Pride Week in London, will consider "legislative and non-legislative options to prohibit promoting, offering or conducting conversion therapy."

Gay conversion "therapies" are based on the premise that being gay, lesbian, bisexual or transgender is a mental illness that can be "cured." But there is no evidence that they work, and the techniques are largely discredited. Members of UK professional bodies for counseling and psychotherapy are prohibited from using such techniques.

The World Health Organization declassified homosexuality a mental condition in 1992.

Ruth Hunt, chief executive of the British LGBT rights group Stonewall, greeted the government's pledge as "an important first step" but added that it needs to lead to "tangible change."

"Some people will be shocked by the findings. But for anyone who is LGBT, or has a family member or friend who is, these results will be sadly recognizable," she said in a statement.

"Laws have improved and attitudes have changed but our society still treats LGBT people like second-class citizens."

According to the government's survey, 40% of those who responded had experienced hate incidents, with nine out of 10 going unreported.

The survey also uncovered discrimination in the workplace, with 23% of respondents reporting that they had received negative reactions from colleagues.

The results also showed that 70% of respondents who identified as having a minority sexual orientation said they had avoided being open because they feared how others might react.

In addition, 67% of transgender respondents said they had avoided being open about their gender identity.

"Everyone in this country should feel safe and happy to be who they are, and to love who they love, without judgment or fear," Minister for Women and Equalities Penny Mordaunt said.

"I am incredibly proud of the UK's global leadership on LGBT equality and the fact that this is the largest survey of its kind, but many of the results are very disturbing.

"It's unacceptable that people feel they cannot hold hands with their partner in public, and that they are unable to walk down the street without fear of abuse. It is also deeply worrying that LGBT people experience difficulty accessing public services such as health care, and that so many are being offered the abhorrent practice of conversion therapy."