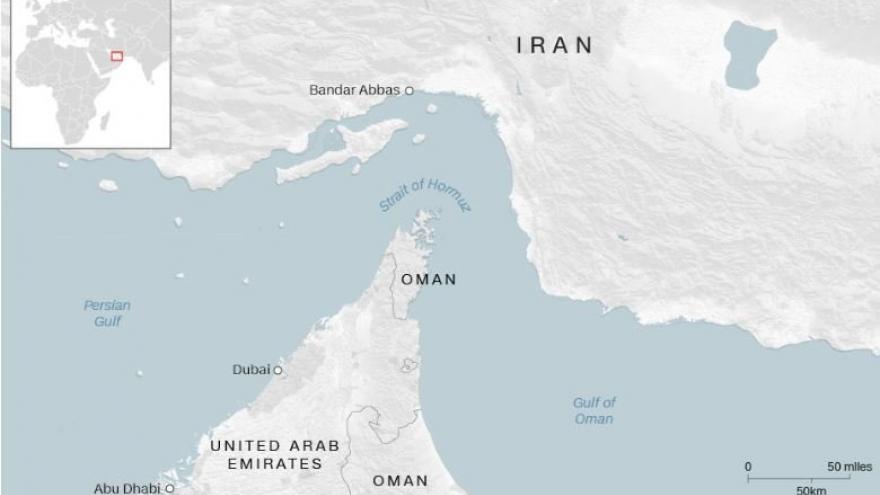 (CNN) -- Britain reiterated warnings Saturday that it would take "robust" action if Iran did not release a UK-flagged oil tanker it seized in the Strait of Hormuz, the latest confrontation in a tense standoff unfolding in the important shipping route.

The vessel captured by the Islamic Revolutionary Guard Corps (IRGC) on Friday is now at the center of a widening crisis between Iran and Western powers, as Tehran fights to free itself from the crippling effects of US economic sanctions and reset nuclear talks.

But there could be serious consequences for the Islamic Republic's aggression toward the UK -- one of three European powers that have sought to save the 2015 Iran nuclear deal even after the United States dropped out.

British Foreign Secretary Jeremy Hunt said the incident showed "worrying signs Iran may be choosing a dangerous path of illegal and destabilizing behavior," adding that the UK's response would be "considered, but robust."

The Foreign Office summoned the Iranian chargé d'affaires on Saturday afternoon. Meanwhile, the government was set to convene a second emergency meeting of national security officials to discuss its response, a Downing Street spokeswoman told CNN.

The UK has warned ships connected to the country's shipping industry to "stay out of the area" in the interim.

Iranian media reported Saturday that the ship, the Stena Impero, was captured following an accident with a fishing boat and was being held for "violating international regulations." A second British-owned ship, the Liberian-flagged MV Mesdar, was briefly held by Iran but then released.

In a letter Saturday to the United Nations Security Council, the UK called on Iran to release the seized tanker, adding that the Stena Impero was within Omani territorial waters exercising "the lawful right of transit passage in an international strait," when Iranian authorities approached it, according to a UN diplomat source who provided CNN with a copy of the letter.

"International law requires that the right of transit passage shall not be impeded, and therefore the Iranian action constitutes illegal interference," said the letter.

Iran's actions in the Strait came just hours after authorities in Gibraltar agreed to extend the detention of an Iranian oil tanker in its custody for 30 days. That ship, the Grace 1, was seized by British authorities on July 4, accused of attempting to transport oil to Syria in violation of European Union sanctions.

Iranian Foreign Minister Javad Zarif responded to Britain's warnings on Saturday with one of his own.

"Unlike the piracy in the Strait of Gibraltar, our action in the Persian Gulf is to uphold int'l maritime rules," Zarif said on Twitter. "UK must cease being an accessory to #EconomicTerrorism of the US."

Hunt later spoke with his Iranian counterpart, accusing him of breaking his word that Iran wanted to "de-escalate" tensions in the Gulf.

Observers had expected Iran to respond to the Grace 1's seizure, and the UK raised the security level for British ships in the Persian Gulf just last week.

"They're (Iran) doing this either in response to the seizing of Grace 1 by Royal Marines and its holding in Gibraltar ... or they may be doing it to widen the tension in the Gulf now because they want to bring this conflict and this state of affairs, which is damaging to Iran, to a head," said British lawmaker Bob Seely, a member of the UK Foreign Affairs Committee.

An increase in tensions in the Strait of Hormuz could have dire economic and security consequences. Around 24% of global oil production passes through the narrow passage, and it's the only way to ship oil out of the Persian Gulf. The US Energy Information Administration calls the Strait of Hormuz one of the "world's most important strategic chokepoints by volume of oil transit."

Richard Meade, the managing editor of the influential shipping industry publication Lloyds List, said the Stena Impero's seizure is "probably the highest level security threat that we have seen in the region since the late 80s."

The tanker looks set to become a pawn in the mounting stalemate between Iran and the US, as well as its allies.

"This is classic Iranian escalatory behavior designed to show it can also push back," Sanam Vakil, senior research fellow at Chatham House in London, told CNN.

But the gamble could come at a steep cost for Iran at a time when it is looking for an opening to renew nuclear talks.

"The dangerous strategy for Iran is that this could push the UK closer to the United States and result in greater coordination between the two allies," Vakil said.

The UK has worked to safeguard the landmark agreement while appeasing Washington, a balancing act that has become increasingly difficult as Iran raises the stakes in the Gulf.

France and Germany, the other two European signatories of the nuclear deal, have condemned Iran's seizure of the Stena Impero, calling on the Islamic Republic to release the vessel.

In a statement, a spokesperson for France's Ministry of Europe and Foreign Affairs said it has been following developments with concern: "Such action is detrimental to the necessary de-escalation of tensions in the Gulf region. We strongly condemn it and express our full solidarity with the United Kingdom."

"Another regional escalation would be very dangerous. It would also undermine all ongoing efforts to find a way out of the current crisis," a Foreign Office spokesperson said in a statement Saturday.

No Britons on board

Though the Stena Impero is registered in the UK, there were no Britons on board when it was seized. The 23-man crew was made up of Indian, Russian, Latvian and Philippines nationals, according to a statement from the ship's owner -- Sweden-based Stena Bulk -- and operator, Scotland-based Northern Marine Management.

The statement from the two companies said their ship was first approached at "by unidentified small crafts and a helicopter" in the Strait of Hormuz in international waters at about 4 p.m. local time (12 p.m. ET).

More than six hours later, the ship was "no longer under the control of its crew" and "uncontactable."

The Stena Impero has since been taken to Iran's Bandar Abbas Port, Iran's Fars news agency reported. The crew will be held on board until an investigation into the accident ends, according to Fars.

Its seizure marks the latest in series of accelerating maritime incidents in the Gulf region between Iranian, UK and US military forces.

Speaking to reporters Friday, US President Donald Trump said the US does not have many tankers in the region but that the country does have a robust military presence there.

On Thursday, the US Navy destroyed an Iranian drone using electronic jamming equipment in the Strait of Hormuz, a US defense official told CNN. The crew of the USS Boxer took defensive action against the Iranian unmanned aerial vehicle after it came close to the US naval ship, the official said.

As of Friday evening, the US military was monitoring the transit of a US commercial cargo ship through the Strait of Hormuz, initially using armed aircraft overhead, according to a US defense official with direct knowledge of the situation.

Continuous monitoring of the transit, which typically takes six to eight hours, is being done mainly by unarmed surveillance aircraft overhead that can call in other forces if needed.