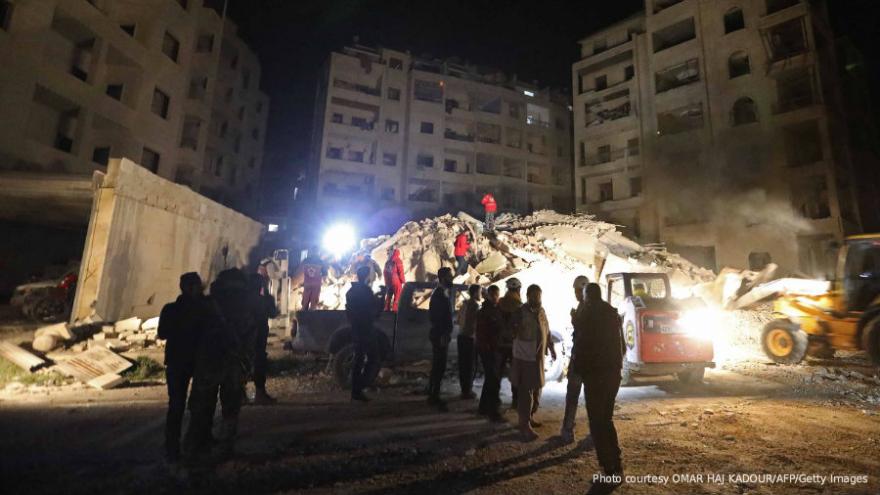 "Most alarmingly, the commission has received multiple reports, now under investigation, that bombs allegedly containing weaponized chlorine have been used in the town of Saraqeb in Idlib and in Douma in Eastern Ghouta," near Damascus, Paulo Pinheiro, chair of the UN's commission of inquiry on Syria, said in a statement issued in Geneva.

The panel also expressed "deep concern" over the escalation of violence in rebel-held Idlib province and in Eastern Ghouta, Pinheiro said.

The White Helmets, a volunteer rescue group, said three of its members and six others were injured by a chlorine gas attack in Idlib's Saraqeb on Sunday night. The group posted several videos on social media showing men coughing and being put onto stretchers.

Two media activists who spoke to CNN from the nearby town of Kafranbil said they were told that the chlorine attack in Saraqeb had been launched from Syrian helicopters.

CNN could not independently verify these claims or videos. The Syrian government has repeatedly denied using chemical weapons.

Rebel-held areas in Eastern Ghouta, meanwhile, continue to be a target of airstrikes, a Syrian monitoring group said.

Syrian regime airstrikes there killed at least 63 people and injured more than 190 others on Tuesday, the UK-based Syrian Observatory for Human Rights said.

Tuesday's deaths included 14 children and 20 women, SOHR said. The monitoring group did not mention allegations of chlorine use in Tuesday's attacks.

Syrian state-run media said the Syrian army was responding to a shelling attack in Damascus by "armed groups" -- an attack that they say killed five people -- including two children -- and injured 13 others.

Regime forces targeted "areas from which the shells were launched in Eastern Ghouta, inflicting heavy losses upon the armed groups' ranks and destroying a number of their mortar launchers," the state-run SANA news agency said.

Various Islamic rebel groups control the Eastern Ghouta area near Damascus, but it has been surrounded by Syrian regime forces for more than four years.

More than 350 people -- including 86 children and 68 women -- have been killed in bombardments in Eastern Ghouta alone since December 29, SOHR says.

But the scale and ferocity of attacks in Idlib and Eastern Ghouta have "increased dramatically" over the last 48 hours, "resulting in multiple reports of civilian casualties & airstrikes that have reportedly hit at least three hospitals," Pinheiro, the chair of the UN's commission of inquiry on Syria, said Tuesday.

"The commission remains committed to fulfilling its mandate to investigate and document all human rights violation(s) occurring in the context of the Syrian armed conflict, regardless of who commits them," Pinheiro said.

US 'gravely alarmed' by reports of chemical attacks

The UN statement comes the day after the US State Department said it was "gravely alarmed" by allegations that Syrian forces conducted chemical attacks.

"We implore the international community to speak with one voice, taking every opportunity to publicly pressure the Assad regime, and its supporters, to cease its use of chemical weapons," spokeswoman Heather Nauert said in a statement Monday night.

On Monday, the opposition Syrian National Coalition condemned what it described as a "barbaric onslaught" by Russian and Syrian forces in Idlib province in recent days and demanded UN action.

Observers say Russia has ramped up its air campaign in Idlib after one of its fighter jets was shot down by rebels in the province on Saturday. The pilot ejected from his aircraft but died following an exchange of gunfire on the ground.

The Idlib area is home to more than 1.1 million of Syria's 6.5 million internally displaced people, many of whom escaped other formerly opposition-held areas after they were overrun by government forces, according to UN figures.

Hundreds of thousands are trying to escape the intensified assault and are seeking refuge at makeshift camps near Turkey's border.