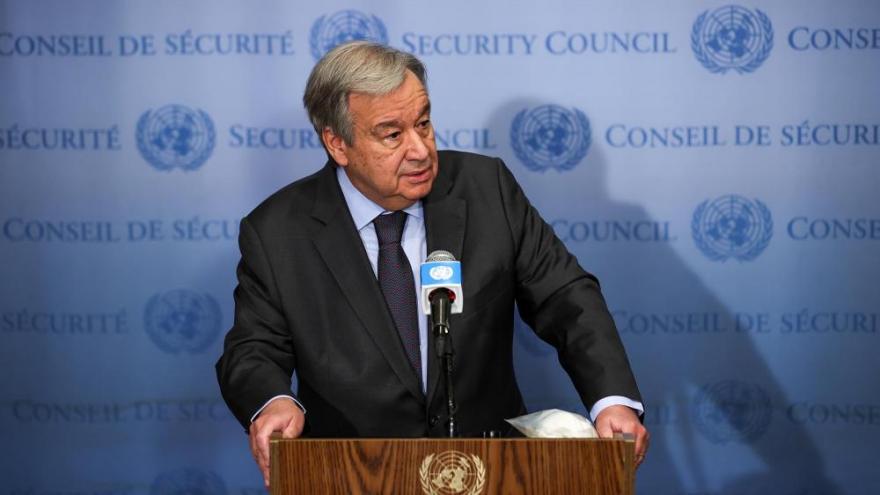 The United Nations Secretary-General António Guterres is warning that White supremacy, neo-Nazism and extremism pose an "international threat" and believes US leaders have a "responsibility" to lead in combating the issue.

(CNN) -- The United Nations Secretary-General António Guterres is warning that White supremacy, neo-Nazism and extremism pose an "international threat" and believes US leaders have a "responsibility" to lead in combating the issue.

"The US is an enormous influence. The soft power of the US is something that, it is clear in culture, in art, in many other aspects. And so what happens in the US inevitably has a strong influence in other parts of the world," Guterres told CNN's Jim Sciutto in an interview Friday.

"And so this kind of natural leadership creates a particular responsibility for United States leaders and for the American communities because indeed what happens here is known everywhere and inevitably reflects in other parts of the world," he added.

Guterres, however, praised the "fantastic demonstrations of anti-racism" in the US and the young activists leading those demonstrations.

Domestic violent extremism poses the "greatest threat" to the US, according to the Homeland Security Department. A number of White supremacists and extremist groups participated in the January 6 attack on the US Capitol, CNN previously reported, and top Capitol security officials testified before Congress last month.

A US intelligence report this week found that White supremacist extremists have the most "concerning" connections outside of the US due to like-minded views in other countries and that a "small number of US (racially or ethnically motivated violent extremists) have traveled abroad to network with like-minded individuals."

The Anti-Defamation League also released a report Wednesday saying that it documented more than 5,000 cases of distribution of White supremacist propaganda — the highest amount ever recorded since the group began tracking it in 2016. The Covid-19 pandemic "generated online conspiracy theories and emboldened some far-right domestic extremists to take more public actions," according to the ADL.

Last month, Guterres told the UN Human Rights Council that extremist movements "represent the number one internal security threat in several countries" and that these groups have "exploited" the Covid-19 pandemic to "boost their ranks through social polarization and political and cultural manipulation," according to USA Today.

"This is something that really must mobilize us all," Guterres told CNN on Friday. "It is a cause for us all that believe in universal values, that believe in human fraternity and human dignity."

He warned that international cooperation between extremist groups is becoming "very extensive."

"I think there is permanent intercommunication, there are even mechanisms of mutual recruitment, mutual influence and at the same time we see some of these groups recruiting war veterans, recruiting former members of security forces, having weapons, and becoming a threat to our societies, and in the international sense," he said.

Guterres also offered that to address the issue, "we need to promote our values" and "invest economically, socially, culturally in social cohesion." He called for law enforcement and judicial systems to be trained to address these issues and "make sure that those that misbehave are held accountable."