Unemployed will get full 11 weeks of $300 boost from stimulus deal, Labor Department says 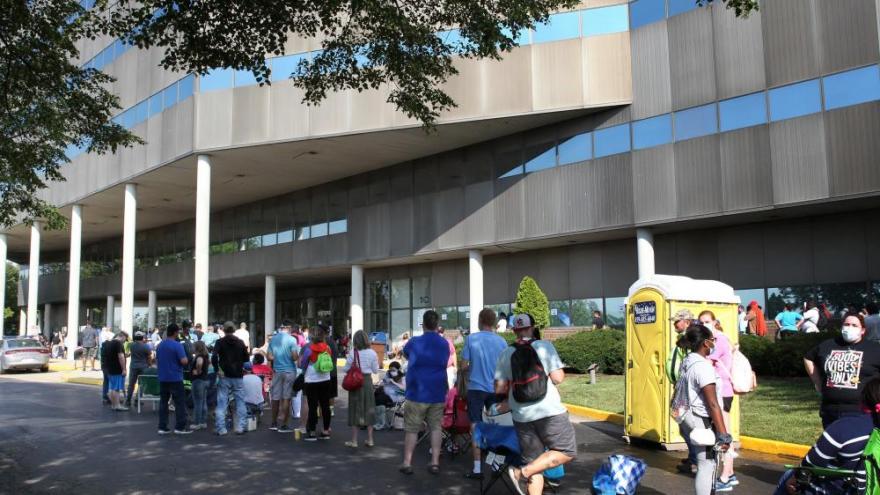 Hundreds of unemployed Kentucky residents wait in long lines outside the Kentucky Career Center for help with their unemployment claims on June 19, 2020 in Frankfort, Kentucky.

(CNN) -- Jobless Americans won't lose out on any benefits in the $900 billion stimulus deal, even though President Donald Trump did not sign it into law until Sunday.

The unemployed will get the $300 federal boost in weekly payments for the full 11 weeks, the Labor Department said. Also, those in two pandemic unemployment programs will receive benefits for the final week of the year.

The duration of the benefits was thrown into doubt late last week, with some Democratic lawmakers and policy experts concerned that the jobless would miss some payments because of the delayed signing. States cannot provide benefits for weeks that start before a bill goes into effect.

"As states are implementing these new provisions as quickly as possible, the department does not anticipate that eligible claimants will miss a week of benefits due to the timing of the law's enactment," the Labor Department said in a statement.

Still, most unemployed Americans may have to wait a few weeks before for state agencies to reprogram the package's provisions into their computers. But the benefits will be retroactive to the end of December.

Under the relief package, the jobless will receive a $300 weekly federal enhancement in benefits through March 14. The amount is half of the earlier federal boost, which ran out at the end of July.

Also, the deal extends by 11 weeks two other pandemic unemployment programs that were created in the $2 trillion CARES Act in March and were set to expire at year's end. An estimated 12 million laid-off workers in these programs were facing the loss of their aid.

The Pandemic Unemployment Assistance program initially expanded jobless benefits to gig workers, freelancers, independent contractors, the self-employed and certain people affected by the coronavirus for up to 39 weeks.

The Pandemic Emergency Unemployment Compensation program initially provided an extra 13 weeks of payments to those who exhaust their regular state benefits.

Both programs will now close to new applicants on March 14, but continue through April 5 for existing claimants who have not yet reached the maximum number of weeks.

While some states will have longer breaks in payments, out-of-work New Yorkers will begin receiving their payments next week since the state's Department of Labor proactively prepared for the enactment of the relief package, Gov. Andrew Cuomo said Tuesday.