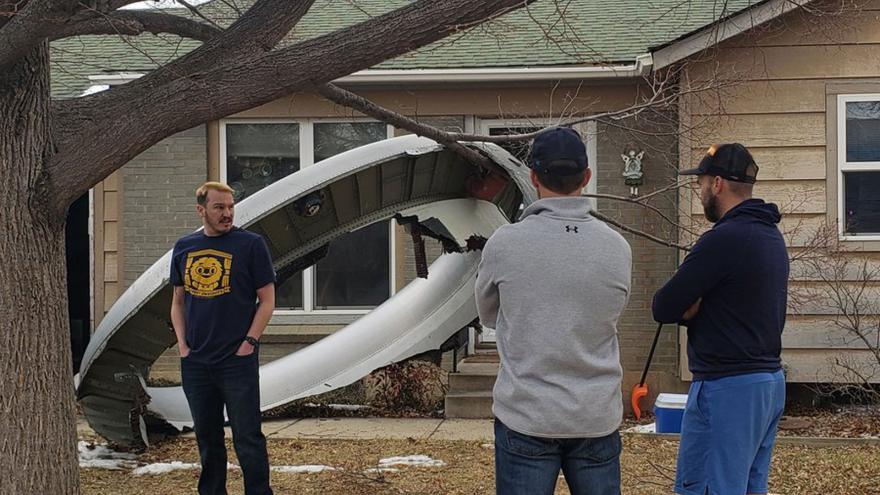 A United Airlines flight returns to the airport as police receive reports of airplane debris in neighborhoods outside Denver. - Courtesy Kieran Cain

(CNN) -- A United Airlines flight bound for Honolulu was forced to return to Denver International Airport Saturday after suffering an engine issue, a spokesperson for the airport told CNN.

The flight returned safely to the airport around 1:30 p.m. local time, the spokesperson said.

That was about 20 minutes after police in Broomfield, Colorado, said via Twitter that they had received reports that an airplane flying over the Denver suburb had engine trouble and had "dropped debris in several neighborhoods around 1:08 p.m."

"No injuries report at this time," the tweet added.

Additional tweets from police said debris landed in Commons Park and the Northmoor and Red Leaf neighborhoods of Broomfield. The city is about 25 miles north of Denver and 30 miles east of Denver International Airport.

Authorities have yet to definitively connect the two incidents, but the Federal Aviation Administration confirmed in a statement that a Boeing 777-200 safely returned to the Denver International Airport after "experiencing a right-engine failure shortly after takeoff."

"The FAA is aware of reports of debris in the vicinity of the airplane's flight path," the statement said.

CNN has reached out to United Airlines for additional information.

Broomfield police cautioned residents to not touch or move plane debris if they see it in their yard.

Kieran Cain told CNN he was playing with his children at a local elementary school when a plane flew over and they heard a loud boom.

"We saw it go over, we heard the big explosion, we looked up, there was black smoke in the sky," Cain told CNN.

"Debris started raining down, which you know, sort of looked like it was floating down and not very heavy, but actually now looking at it, It's giant metal pieces all over the place," he said.

"I was surprised that the plane sort of continued on uninterrupted, without really altering its trajectory or doing anything," he said. "It just kind of kept going the way it was going as if nothing happened."

Cain said he and his children took shelter under an overhang as the debris came down.