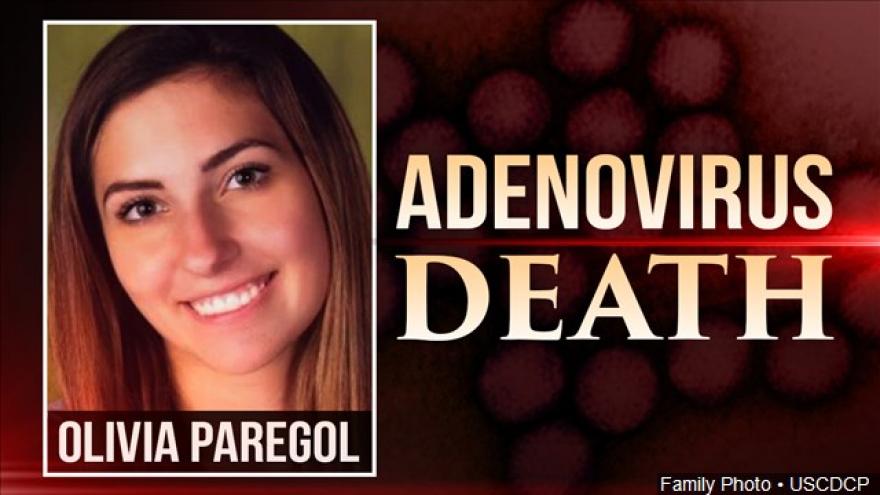 Olivia Paregol, 19, was a University of Maryland freshman who died from complications of adenovirus. Photo courtesy Family photo / USCDCP

(CNN) -- A student at the University of Maryland has died from adenovirus associated illness, the director of the university's health center said in a statement Tuesday.

The student was identified as Olivia Paregol, 18, by her family members, according to CNN affiliate WJLA.

Paregol, a freshman, lived in a dormitory on the university's campus, her father Ian Paregol told WJLA. He said she also was battling Crohn's disease.

"She definitely appeared to be getting sicker and sicker," Ian Paregol told the news station.

The university learned of the first case of adenovirus on November 1, and since then has confirmed five other more cases of the virus, University Health Center Director David McBride said in a statement. The more severe adenovirus type 7 was identified in one of those cases, McBride said.

Adenovirus 7 is "most commonly associated with acute respiratory disease," according to the US Centers for Disease Control and Prevention. Other types of adenovirus infections can cause flu-like symptoms, pinkeye and diarrhea.

McBride said the university has responded by increasing the cleaning of "high-touch surfaces." He urged the campus community, especially people with chronic medical conditions, to take preventive measures to protect from the virus.

Paregol's death was announced just days after health officials in New Jersey confirmed that an 11th child had died in an adenovirus outbreak at a health care facility in that state. A total of 35 people in New Jersey, including 23 children, have become sick from the virus since September.

Adenoviruses are often spread by touching a contaminated person or surface, or through the air by coughing or sneezing. They are known to persist on unclean surfaces and medical instruments for long periods of time, and they may not be eliminated by common disinfectants, but they rarely cause severe illness in healthy people. However, people with weakened immune systems have a higher risk of severe disease, and they may remain contagious long after they recover, according to the CDC.

The university recommends that students visit a physician within 48 hours of developing symptoms, stressing that "vigilance is extremely important" for those with conditions like asthma and diabetes, or people who take medication that lowers immune function.