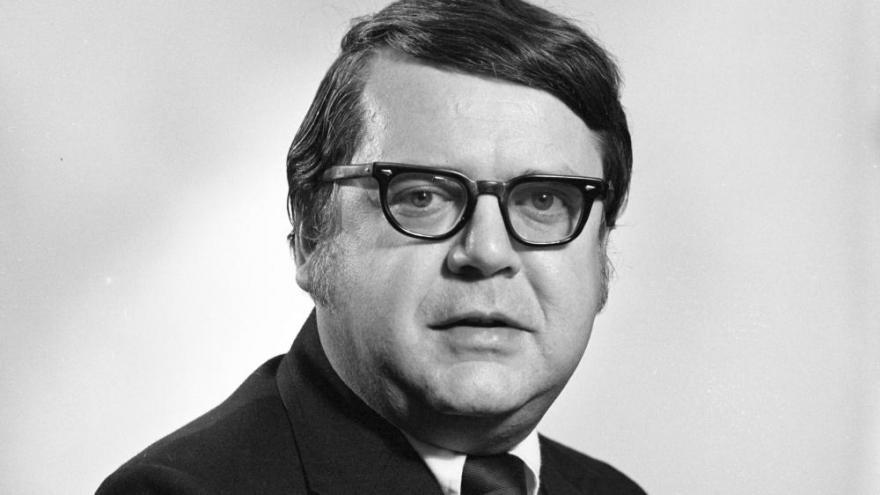 (CNN) -- The son of the University of Michigan's legendary football coach, Bo Schembechler, alleged Thursday that he was sexually abused by a former team doctor being investigated by the school -- and that his father knew and did nothing.

Matt Schembechler, 62, said he first visited Dr. Robert Anderson before playing football as a fourth-grader in 1969. Anderson "fondled my genitalia and conducted an invasive rectal exam," he told reporters.

He told his mother about the exam, and she instructed him to tell his adoptive father. It didn't go well, he recalled, his dad didn't want to hear the allegations.

"Bo's temper was legendary, and he lost it," Matt Schembechler said. "I tried to tell him repeatedly, but my effort earned me a punch in the chest. This was the beginning of the end of the relationship. ... I hoped my father would protect me, but he didn't."

The boy and his mother later reported Anderson's behavior to athletic director Don Canham, who terminated Anderson, but it is Matt Schembechler's understanding that his father had Anderson reinstated, he said.

The coach's son was joined by two heretofore anonymous former Michigan players, Daniel Kwiatkowski and Gilvanni Johnson, who were cited in a report commissioned by the UM that found the university received hundreds of allegations about Anderson -- over decades -- and failed to act, attorney Mick Grewal said. The ex-players say they told the coach of Anderson's abuse.

Grewal described Anderson as a "pedophile predator" who Bo Schembechler protected. Matt Schembechler and the former players' purpose in telling their story publicly is twofold, the lawyer explained.

"Their courage to come forward and stand today is not only going to help them heal but is also going to help all the other hundreds, if not thousands, of survivors of this ordeal," Grewal said.

A statement from UM President Mark Schlissel and the board of regents expressed sympathy for the victims and thanked them for their bravery. The school has taken measures to protect its students going forward, it said.

"We condemn and apologize for the tragic misconduct of the late Dr. Robert Anderson, who left the University 17 years ago and died 13 years ago. We are committed to resolving their claims and to continuing the court-guided confidential mediation process."

The ex-players' allegations are similar to those in a 240-page report last month by law firm WilmerHale, alleging Anderson was moved from University Health Services to the athletic department in 1981 after Thomas Easthope, assistant vice president of student services, received "credible reports of misconduct" in 1978 or 1979.

An alleged victim told the firm Easthope had conveyed to him that Anderson would stop seeing patients, but Anderson "continued to provide medical services to student-athletes and other patients -- and to engage in sexual misconduct with large numbers of them" until his retirement, the report said. Easthope told investigators he had fired Anderson, "but Mr. Easthope did not do so," the report said. Easthope died in February.

"There is no reasonable explanation," the report concluded, for Easthope's failure to act on the "rumors and innuendo surrounding Dr. Anderson," who worked at the university from 1966 to 2003.

He recounted an exam similar to the one Matt Schembechler says he endured. Johnson visited Anderson for colds, injuries and other matters at least 15 times during his four years at Michigan, and the doctor would fondle his penis and give him rectal exams each time, he said.

He told Bo Schembechler, who said he'd follow-up, but Johnson never heard back, he said. Other players told him "not to rock the boat," and Bo Schembechler reneged on a promise that the two-sport athlete could also play basketball while at Michigan, Johnson alleged.

Everyone knew about the abuse, he said, and players and coaches talked about it regularly.

"Coaches used to joke about him and actually threatened (a) Dr. Anderson exam if (they) did not think we were working hard enough," he said. "Only now do I realize how crazy it was to threaten rape as a way of motivating players to work harder."

Kwiatkowski, who played at Michigan from 1977 to 1981, suffered the same abuse, he said, adding that Anderson once blew on his penis and told him it was OK to get an erection. Bo Schembechler had promised Kwiatkowski's mother he'd treat the young man like family, so he was surprised by his coach's reaction when he reported Anderson.

"Bo looked at me and said, 'Toughen up,'" Kwiatkowski said, and sent him back for three more exams with Anderson, who "violated me again and again."

The WilmerHale report alleges that -- much like Johnson relayed Thursday -- athletic officials "heard jokes or rumors about Dr. Anderson's examinations," but none of them took steps to investigate.

The report was based on interviews with hundreds of Anderson's former patients and "approximately 200 current and former University employees, including administrators, faculty members, and coaches, as well as additional (University Health Services), Athletic Department, and Michigan Medicine personnel."

Kwiatkowski and Johnson are among the sources, and anonymously shared with investigators that they told Bo Schembechler about Anderson's behavior, Grewal told CNN.

Following the report's release, Schlissel, the school president, said the university was offering "its heartfelt apology for the abuse perpetrated by the late Robert Anderson."

"We will work to regain the trust of survivors and to assure that we foster a safe environment for our students, our employees, and our community," Schlissel wrote.

The allegations already resembled those against Larry Nassar at Michigan State University and Richard Strauss at Ohio State University -- doctors accused of leveraging their positions to molest students and athletes. Strauss killed himself in 2005. Nassar is serving up to 175 years in prison after pleading guilty to criminal sexual conduct.

The addition of Bo Schembechler now draws comparisons to Penn State, where the late coaching icon, Joe Paterno, faced allegations that he did nothing about Jerry Sandusky, his assistant of 30 years, sexually abusing boys at team facilities and other locations. A jury found Sandusky guilty of 45 counts of child abuse in 2012. He is serving a sentence of up to 60 years in prison.

Other alleged victims have come forward

Former wrestler Thomas DeLuca went to the University of Michigan in 2018 to share a report of alleged abuse by Anderson, who he said, "examined his penis, did a hernia check, and conducted a digital rectal examination without explaining why such examinations were necessary."

In 1975, he told his coach of the abuse, which began three years prior, DeLuca said. He lost his scholarship and was kicked off the team, he said.

Chuck Christian, who played tight end for the Wolverines in the late 1970s and early 1980s, told CNN in May 2020 that he, too, was abused by Anderson and that the doctor's unnecessary rectal exams dissuaded him from seeing physicians later in life.

The players who joined Matt Schembechler on Thursday say, they, too became wary of doctors. Kwiatkowski jeopardized his own health, he said, and Johnson delayed important health care because of his distrust. Both men also struggle with intimacy issues, they said, and Johnson recalled engaging in promiscuous behavior to prove to himself "he was a man."

Christian is now battling prostate cancer, which he says might've been diagnosed earlier if not for his fear of physicians.

"He hurt so many people, and the way I look at it, he didn't just rape the 18-year-old freshman football player -- he raped the men that we grew to become," Christian told CNN last month. "This is affecting us for generations, and nobody will know how many generations of what Anderson has done will affect us."

In a 2020 interview, however, Christian bristled at comparisons between Paterno and Bo Schembechler, saying he was an excellent coach and wasn't to blame for Anderson's abuse. Still, he was "disappointed to find out that Michigan didn't have the integrity the players had," he said.

Other son: 'Bo would've done something'

The Hall of Fame coach has other defenders, including his biological son, who has previously told ESPN that his father knew nothing of Anderson's abuse.

"I can tell you unequivocally no one ever told Bo," Glenn Schembechler told the network last year. "Bo would have done something."

Current Michigan coach Jim Harbaugh also defended his predecessor. Standing in front of the football building that bears Schembechler's name and features a statue of the coach, Harbaugh told reporters he saw no such behavior as a youngster or as Michigan's quarterback in the 1980s, according to The Detroit News.

Anderson's children have come to their dad's defense, telling The Detroit News last year they didn't believe the accusations. Kurt Anderson said, "That is just not him," and Jill Anderson called the allegations ridiculous.

"My dad was a beloved doctor at the UM for so many years," the doctor's daughter told the newspaper. "He was very well-respected. Everyone said he treated them with the utmost integrity and care."

According to the WilmerHale report, many patients abused by Anderson were members of susceptible populations -- including LGBTQ patients, student-athletes vying for scholarships and patients seeking medical exemptions from the Vietnam War -- and "felt they had little choice but to abide Dr. Anderson's abuse."

Some of the alleged victims quit their teams, while others questioned their sexuality, sought counseling or dropped out of school, the report said, concluding, "The trauma that Dr. Anderson's misconduct caused persists to this day."

Kwiatkowski recalled going to a Michigan reunion in 1999, where Anderson and Bo Schembechler were in attendance. He got physically sick before greeting his former coach, he told reporters.

"Bo told me, 'Don't be afraid of me. I can't hurt you anymore,'" Kwiatkowski said. "Well, Bo's statement couldn't be further from the truth. Even all these years later, I struggle with pain caused by Dr. Anderson and Bo. Bo knew. Everybody knew."