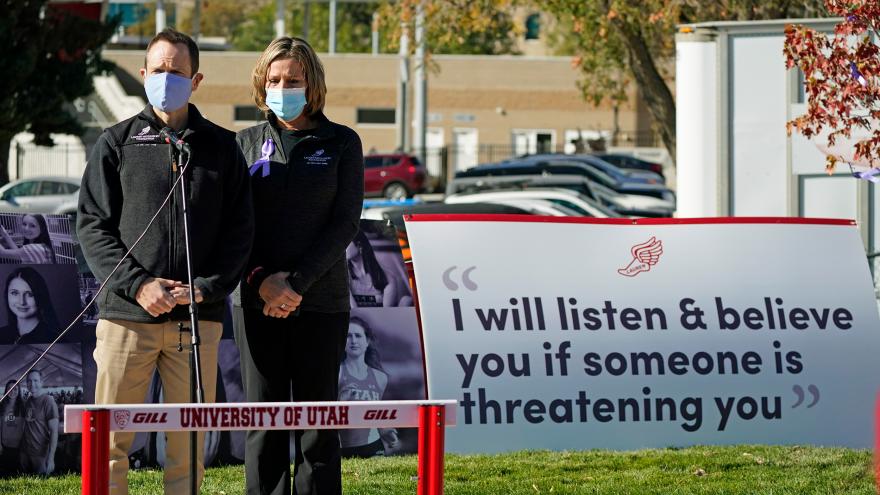 Rick Bowmer/AP-Jill and Matt McCluskey speak on the two-year anniversary of their daughter Lauren McCluskey\'s death.

(CNN) -- The University of Utah has settled two lawsuits with the parents of Lauren McCluskey, a 21-year-old student who was killed by an ex-boyfriend she had complained about to police more than 20 times.

McCluskey's body was found in the back seat of a car on campus two years ago. She had been shot and killed by 37-year-old Melvin Rowland, a convicted sex offender who had spent more than a decade in prison. He killed himself hours later after a police chase, university police had said.

"The university acknowledges and deeply regrets that it did not handle Lauren's case as it should have and that, at the time, its employees failed to fully understand and respond appropriately to Lauren's situation," University of Utah President Ruth Watkins said in a statement on Thursday.

"As a result, we failed Lauren and her family."

The university will pay the McCluskeys $10.5 million and make a charitable donation of $3 million to the Lauren McCluskey Foundation.

The university also said it has also been making improvements to campus safety after the death, including implementing new policies and trainings and adding a new shuttle service.

McCluskey and Rowland had met at a bar and dated for about a month. When McCluskey learned Rowland had a criminal conviction, and had lied about his age and name, she ended the relationship.

Over the course of the next two weeks, she called campus police a number of times to report he was sending her harassing messages, as well as attempting to extort money from her. She told police she sent $1,000 to an account in the hopes of keeping compromising photos of her private, according to a review of the incident.

Audio from McCluskey's 911 calls to Salt Lake City Police show that she was increasingly frustrated by the pace of the university investigation.

The university said in the settlement "that the murder of Lauren McCluskey was a brutal, senseless, and preventable tragedy and acknowledges the unspeakable loss the McCluskey family has suffered and continues to suffer."

'Hope for the future'

As part of the settlement, the University of Utah said it will raise funds to construct an indoor track facility that will be named after Lauren McCluskey, who was a track athlete at the school.

As part of the campus safety improvements, the university has also consolidated evening classes in neighborhood clusters to help keep students safer.

"We are engaged in making meaningful and lasting changes in our approach to campus safety, particularly in how we respond to and assist crime victims and through focusing on research-based approaches to violence prevention," Watkins said.

She added that the university believes these changes will build a culture of safety that prioritizes needs of crime victims and provides them with the full response and support they need.

"We have hope for the future," Jill McCluskey said on Thursday, "and we hope not only that the University of Utah is a safer place, but that campuses will be safer nationwide because of what we're doing with the foundation."