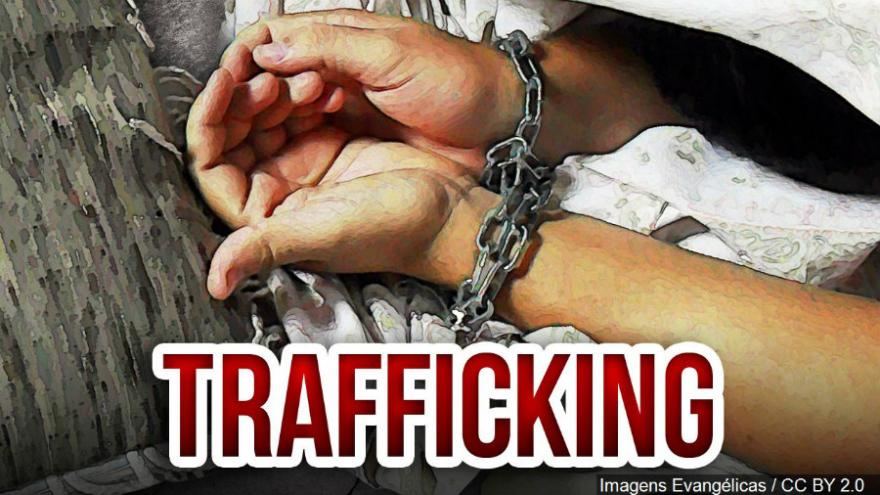 (CNN) -- Six men who allegedly made fortunes from buying and selling vulnerable migrants have been hit by United Nations sanctions in an unprecedented response to the international slave trade exposed by CNN, the Dutch foreign ministry said Thursday.

Four Libyans and two Eritreans are accused of leading criminal networks that traffic vast numbers of vulnerable migrants through Libya to Europe. Strikingly, one of them is a commander with the Libyan Coast Guard, whose efforts to stem the flow of migrants are supported in part by funding from the European Union. He is accused of using firearms to deliberately sink boats carrying migrants.

Another is accused of having longstanding links with ISIS and is known for "cultivat[ing] relationships with terror groups," according to UN documents obtained by CNN.

Others in the group are accused of selling migrants as "sex slaves" and being responsible for some of the worst migrant boat disasters in the Mediterranean.

The motion for sanctions was filed to the UN Security Council's Libya sanctions committee by The Netherlands, supported by France, Germany, the United Kingdom and the United States. It followed a months-long investigation by a panel of UN experts. Russia put a "technical hold" on the motion in May and requested more evidence, but dropped its objection on Thursday.

It's the first time the committee has slapped international sanctions on individuals for human trafficking.

Dutch prosecutors describe the men as ostentatious with their wealth and acting with impunity. "The sanctioned individuals are young, mostly 30-something, and people who really want to spend their money; on their militia, their business, but also on properties and goods all over the world. They feel untouchable," the Dutch Prosecutor's Office said in a statement.

Dutch Foreign Minister Stef Blok told CNN the sanctioning of the Coast Guard commander "shows that we will go to whatever place or organization concerned in finding and punishing the people responsible, even if it is an organization that we are working together with in other fields."

Documents obtained by CNN show how the men profited from the smuggling and exploitation of migrants and refugees in a network that spanned Africa.

"This abuse has reached an unprecedented scale and level of severity, and these illicit activities have resulted in thousands of fatalities on land and sea," one of the UN documents says. "This cynical business model has enabled armed groups to accumulate vast wealth," it adds.

The sanctions imposed will freeze the six men's financial assets including personal bank accounts and the revenue from their global business activities. The six men will also be subject to strict travel bans.

"These sanctions will help stop the flow of blood money ... It will prevent them from buying protection in Libya which in turn can destabilize the region," the Dutch National Prosecutors' Office said.

CNN reached out to those named, where contact details were available, but have not received responses.

Each year, tens of thousands of people pour into Libya -- the final transit stop before a short but dangerous sea voyage across the Mediterranean to Europe.

For those involved in the smuggling and trafficking networks, it has been a lucrative and exploitative business with revenues in the billions, according to the European Migrant Smuggling Center (EMSC).

In 2015, migrant smuggling networks made between EUR 4.7 billion and EUR 5.7 billion trafficking people bound for Europe, according to a 2017 EMSC report. There was a sharp decline in 2016, with profits falling by nearly EUR 2 billion from 2015, according to the same report.

Some of those using the central Mediterranean route are refugees fleeing conflict while others are economic migrants.

A crackdown by the Libyan coastguard means fewer boats are making it out to sea, leaving the smugglers with a backlog of would-be passengers on their hands. As a result, there are increasing reports of migrants being sold in slave auctions before facing the most appalling conditions.

Migrant testimonies provided to the International Organization for Migration (IOM) have revealed "the image of a Libya in chaos, where violence and abuse are increasingly frequent and armed groups find human beings an extremely profitable source of money."

Last year, CNN reporters went undercover at a slave market in Libya to document the violation of human rights and inhumane treatment that have so many desperate migrants have suffered.

"The situation is dire," Mohammed Abdiker, the IOM director of operation and emergencies, told CNN in November. "Some reports are truly horrifying and the latest reports of 'slave markets' for migrants can be added to a long list of outrages."

The evidence filmed by CNN was handed over to the Libyan authorities, who immediately launched investigations into the networks operating in the region.

The footage also sparked international condemnation and a backlash of protests around the world.

"It was CNN that drove the attention to this terrible slave trade that has been going on in Libya for far too long," Blok, the Dutch Foreign Minister, told CNN.

"As Netherlands is currently a member of the UN Security Council, we proposed to them to impose sanctions on six of the worst perpetrators -- and that will mean that this crime won't be left unpunished."

According to evidence provided to the Security Council, the targets are:

The 29-year-old Libyan is a commander of the European Union-funded Coast Guard based in Zawiya. The UN panel of experts claims he has been consistently linked to violence against migrants and has used firearms to sink migrant boats.

He is also accused by several witnesses of rounding up migrants at sea and taking them to the notorious al-Nasr detention center, where they are said to be held in brutal conditions and subjected to beatings.

The commander of the Anas al-Dabbashi militia group and leader of a transnational trafficking network actively operating in Zawiya has been accused of working directly with terror groups.

The documents state that his militia group controls "departure areas for migrants, camps, safe houses and boats," and has exposed migrants -- including minors -- to "brutal conditions and sometimes fatal circumstances on land and at sea."

His militia group is also accused of having "long standing" links with ISIS and is said to have had "several" of the terror group's "operatives" in its ranks.

The Libyan multimillionaire has been targeted for mistreating migrants and selling women from Sub-Saharan countries and Morocco as "sex slaves" on the "local market."

Kachlaf is head of the Suhada al Nasr brigade in Zawiya and has direct links to Al-Milad. His militia group is said to control a central hub of smuggling operations at the Zawiya refinery.

Evidence gathered by the UN panel of experts defines the condition of migrants held in detention by Kachlaf as "critical."

An arrest warrant was issued for Ermias Ghermay by the Italian police in 2015. Italian authorities say the Eritrean is directly involved in a shipwreck on October 3, 2013, in which 266 people died near the Italian island of Lampedusa.

The UN documents state that Ghermay heads up an East African network that has smuggled "tens of thousands of migrants" and that his human-smuggling network stretches "from Sudan to the coast of Libya and to Europe... and the United States."

The 35-year-old Libyan is accused of leading a transnational trafficking network, smuggling 45,000 people over the sea in 2015 alone. Abu-Qarin goes by the nomme de guerre "The Doctor," and has been identified as a "central actor" in human-trafficking activities in and around Sabratha, Libya. He is said to operate alongside Ghermay, who "takes care of the 'Eastern Supply Chain'" on behalf of Abu-Qarin.

Significantly, Abu-Qarin is accused of organizing a migrant boat journey from Libya to Italy on April 18, 2015, in which 800 people drowned after the boat sank off the Libyan coast. It is to date one of the worst migrant boat disasters in the Mediterranean Sea.

Additional evidence states Abu-Qarin is responsible for the detention of migrants in brutal conditions.

Like Abu-Qarin and Ghermay, the Eritrean is said to be responsible for smuggling tens of thousands of migrants from the Horn of Africa to the coast of Libya, and onward to Europe and the United States. He is identified in the UN documents as a significant player in the exploitation and abuse of "a large number of migrants in Libya."

Abdelrazak is accused of "serious human rights abuses" operating alongside Libyan criminal organizations, while accumulating "immense wealth" through the trafficking of people.

Abdelrazak is said to be linked to at least two fatal shipwrecks in the Mediterranean.