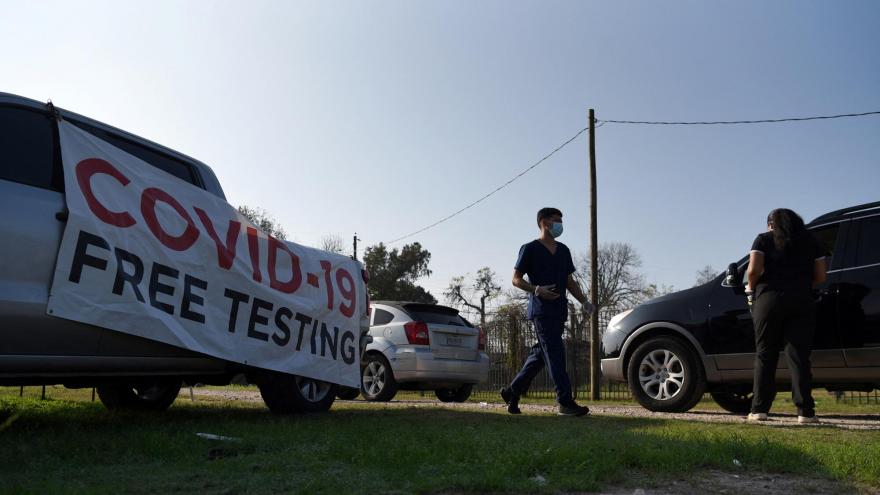 Healthcare workers operate a COVID-19 drive-through testing site as the Omicron variant of the coronavirus continues to spread through the country in Houston, Texas, in 2021.

(CNN) -- The US Centers for Disease Control and Prevention is expected to update its guidance on the recommended isolation period imminently, according to a source familiar with the plan.

The agency, which could provide the update as soon as Tuesday, has faced pressure over the last week from outside medical experts to include a testing component in its new shortened isolation period. But it remains to be seen what the final language from the CDC will look like.

CDC Director Dr. Rochelle Walensky has steadfastly defended the agency's decision not to include recommending a rapid test in the new guidance, telling CNN last week, "We opted not to have the rapid test for isolation because we actually don't know how our rapid tests perform and how well they predict whether you're transmissible during the end of disease."

On CNN on Sunday, Dr. Anthony Fauci, the nation's top infectious disease specialist, said the "likelihood of transmissibility is considerably lower" in the second half of the 10-day period following a positive result.

Walensky has also maintained that the CDC's decision to not include a testing recommendation had nothing to do with the nationwide shortage of rapid tests.

"This decision really, from an isolation standpoint, had everything to do with the fact that we wouldn't change our guidance based on the result of that rapid test. And you know that it didn't have anything to do with any shortage at all, because we recommend rapid tests for those in quarantine," Walensky said.

Despite that, there has been deep frustration inside the Biden administration in the days since the CDC announced it was shortening the isolation period for those who test positive for Covid-19 from 10 days to five with no testing component, according to multiple officials.

US Surgeon General Dr. Vivek Murthy said on CNN's "New Day" Tuesday that the CDC is working on a clarification to its guidance and that he expects it any day now.

Asked what he meant by a clarification, Murthy said, "They're going to speak to the role that testing can play in a situation like reducing isolation. What they're trying to do -- it's important to say more broadly -- is recognize and incorporate both the evolving science on Omicron and on prior variants in terms of how long somebody remains contagious, with the critical need to maintain essential services."

Murthy added that this means making ensuring there frontline workers available to treat sick people and firefighters to show up if someone's house is on fire.

"That means we have to balance those. Those are all part of public safety," he said. "That clarification, as I mentioned, will come out in the next couple of days."

Murthy also said that CDC will comment on the science behind the initial decision to not require a negative test, but he didn't want to speak for the agency.

"But we have seen that there is utility for antigen tests in a variety of situations," he said. "We recommended them to people before they get together at holiday gatherings. We've certainly seen many schools and businesses use them to screen people out. So I believe that there will be a role for antigen testing here to help reduce risk as well."