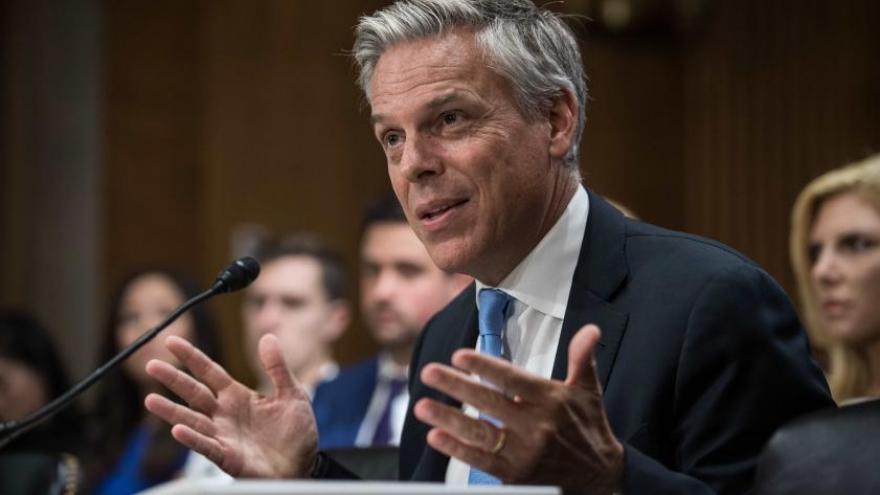 US Ambassador to Russia Jon Huntsman has submitted his resignation letter to President Donald Trump and plans to move back home to Utah, according to a source familiar with his thinking.

(CNN) -- US Ambassador to Russia Jon Huntsman has submitted his resignation letter to President Donald Trump and plans to move back home to Utah, according to a source familiar with his thinking.

Huntsman's resignation is effective October 3 and there is some speculation that he is planning to run for governor of Utah, a role he previous served in from 2005 to 2009. However, a source close to Huntsman told CNN that decision is still up in the air, saying: "We shall see, it's been a long two years."

The decision comes as the Trump administration is also dealing with the departure of Fiona Hill, the top official on Russian affairs at the National Security Council.

Hill is expected to leave her post this month meaning the administration will have to replace two of its top Russia hands at the same time.

The Salt Lake Tribune was first to report Huntsman's resignation.

Huntsman's successor, whoever it may be, will face the difficult task of fulfilling Trump's goal of improving ties with Russia at a time of heightened tensions between the two countries over issues including Moscow's annexation of Crimea, election interference and the attempted poisoning of an alleged Russian spy in Britain.

Lawmakers on both sides of the aisle have voiced concerns about Trump's reluctance to impose sanctions on Russia and continued attempts to cast doubt on Russian interference in the 2016 presidential election amid his efforts to improve relations between Washington and Moscow.

Trump and Putin discussed need for a new ambassador

CNN previously reported that Trump and Putin discussed the need for a new US ambassador in Russia during a phone call last week. The two men did not mention any names of potential replacements for Huntsman, two officials said.

Huntsman and his wife have been having dinners over the last few months with fellow diplomats and others as they prepare to leave the country, according to an embassy source.

Huntsman's wife, Mary Kaye, has posted some of their recent events -- such as a Friday night pool competition with the embassy's marine guard members last month and a walk along the Moscow river -- on Instagram.

Huntsman, who has served in the post since 2017, was directly involved in the case of Paul Whelan, an American corporate security director who was mysteriously detained by Russian authorities on suspicion of spying.

In January, Huntsman visited Whelan personally -- an atypical move for an ambassador, CNN analyst John Kirby said -- when Whelan was arrested in a possible retaliation move 15 days after alleged Russian spy Maria Butina pleaded guilty in US federal court to trying to infiltrate political circles and influence US relations with Russia.

Huntsman revealed in November that he had stage one melanoma -- a diagnosis that he did not share with anyone in Moscow out of concern over how the information would be received. Huntsman, a former Utah governor and 2012 presidential candidate, previously served as ambassador to China in 2009.

Frustrations about the administration's inaction and its soft-handed approach to Russia came to a head in mid-February, with a bipartisan group of senators introducing a massive bill aimed at countering Russian malfeasance.

Last week, Trump imposed long-overdue, legally mandated sanctions on Russia for its poisoning of former Russian spy Sergei Skripal and his daughter, Yulia, yet questions about the administration's willingness to confront Moscow continue to linger.