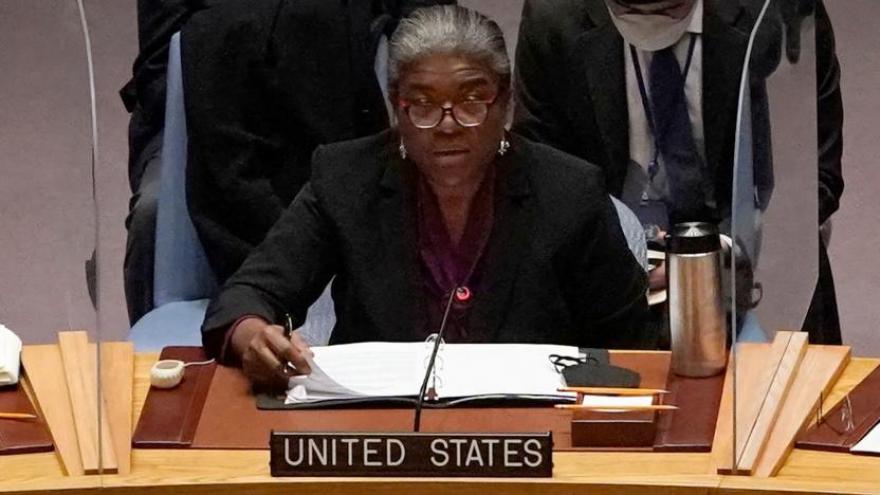 US ambassador to the UN Linda Thomas-Greenfield (C) speaks during an emergency meeting of the UN Security Council on the Ukraine crisis, in New York, February 21.

(CNN) -- US Ambassador to the United Nations Linda Thomas-Greenfield said Russian President Vladimir Putin's recognition of pro-Moscow regions in Ukraine as independent was an "attempt to create a pretext for a further invasion of Ukraine" and that his claim that the Russian forces he has ordered to enter those regions are "peacekeepers" is simply "nonsense."

"We know what they really are," Thomas-Greenfield said of those forces in remarks at a last-minute UN Security Council meeting Monday night.

Thomas-Greenfield said Putin's actions on Monday has "put before the world a choice."

"We must meet the moment and we must not look away. History tells us that looking the other way in the face of such hostility will be a far more costly path," she said. "President Putin is testing our international system. He's testing our resolve and seeing just how far he can push us all."

Thomas-Greenfield's comments marked the first senior US official to respond to Putin's actions publicly. The Biden administration announced after Putin's decrees that it is imposing new sanctions on trade and financing in the two territories, and Thomas-Greenfield said that the US would take further measures Tuesday to hold Russia accountable for the "clear violation of international law."

"We must make it clear that an attack on Ukraine is an attack on the sovereignty of every UN member state and the UN Charter and that it will be met with swift and severe consequences," Thomas-Greenfield added.

The United Kingdom also plans to announce new sanctions on Russia as a result of its decision to recognize the territories, said Barbara Woodward, the UK's permanent representative to the UN.

"There will be severe economic consequences to its actions," Woodward said.

Ukraine's ambassador to the UN, Sergiy Kyslytsya warned that Russia would target more countries if the international community does not stand up to Moscow.

"Members of the Security Council, the United Nations is sick, that's a matter of fact. It's been hit by the virus spread by the Kremlin," Kyslytsya said. "Will it succumb to this virus? It is in the hands of the membership."

China's UN Ambassador Zhang Jun delivered a terse statement that avoided taking sides. "All parties concerned must exercise restraint, and avoid any action that may fuel tensions," he said.

'To travel back in time'

Thomas-Greenfield said Putin has "made a series of outrageous false claims about Ukraine, aimed at creating a pretext for war, and immediately thereafter announced Russian troops are entering the Donbas."

She said that Putin's assertions that Russia has a rightful claim to all territories from the Russian empire of 100 years ago could include counties like Finland, Belarus, Georgia and Moldova.

"In essence, Putin wants the world to travel back in time, to time before the United Nations to a time when empires ruled the world. But the rest of the world has moved forward. It is not 1919. It is 2022," she said. "The United Nations was founded on the principle of decolonization, not recolonization and we believe the vast majority of UN member states and the UN Security Council are committed to moving forward not going back in time."

Monday's meeting was held at the request of Ukraine and other countries following Putin's moves, which have sparked fears that the recognition of the pro-Moscow territories is the opening phase of a larger potential military operation targeting Ukraine.