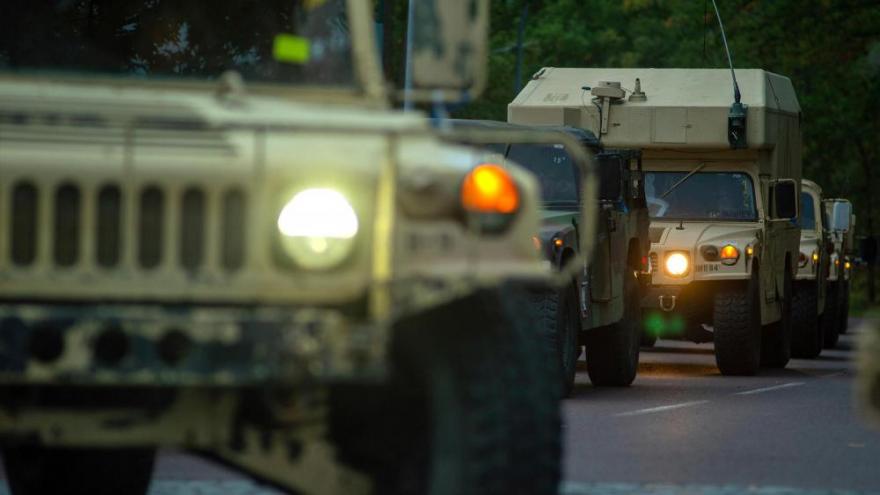 In this October 2019 file photo, a convoy of US Army vehicles drives towards Poland to participate in Operation Atlantic Resolve to ensure the operational readiness of NATO troops.

(CNN) -- The US and a handful of allies are in discussions to deploy thousands more troops to Eastern European NATO countries before any potential Russian invasion of Ukraine as a show of support in the face of Moscow's ongoing aggression, three US officials familiar with the discussions tell CNN.

Among the countries considering accepting the deployments are Romania, Bulgaria, and Hungary. The deployments would number approximately 1,000 personnel to each country and would be similar to the forward battle groups currently stationed in the Baltic States and Poland.

The US and UK are among those considering the new, pre-invasion deployments, but not all 30 NATO members are willing, according to a European diplomat.

NATO allies have not been entirely on the same page about the severity of the threat, and Germany, for example, has refused to sell new weaponry to Ukraine. Therefore, the US is in discussions to send the additional forces on a bilateral basis or, as one official described it, as a "coalition of the willing."

Broadly, the US military goal would be to "meet the capability" NATO allies in the region are asking for, another defense official said last week. US forces could operate, as they already do, unilaterally in Europe, but could also operate under existing NATO command structures.

The possibility of deploying some forces closer to Russia's doorstep before an invasion marks a shift by the administration, which had previously been wary of the risk of further provoking Moscow. The move could be weaponized by the Kremlin as an example of the kind of aggressive NATO posture that Russia has been using to justify its buildup of forces along Ukraine's borders.

Pentagon press secretary John Kirby said on Monday that the US has put 8,500 troops in the US on heightened alert in case a NATO Response Force is called up and American forces are needed quickly. However, the vast majority of these forces are intended for activity supported by the full NATO alliance. The US and NATO have tens of thousands of other troops already in Europe to draw on for any additional deployments to Eastern European allies.

Kirby told CNN on Tuesday that some troops are also on heightened alert "just for our own United States purposes to see if there's a need for us to continue to reassure on a bilateral basis with some of our NATO allies over in Europe." And President Joe Biden also said on Tuesday that he "may be moving some of those troops in the nearer term, just because it takes time" and because the US' eastern European allies have "reason for concern."

President Biden was originally planning to deliver remarks to the public on the situation with Russia as early as this week, two sources said, but it is now unclear whether he will as the White House continues to try and engage with Russia diplomatically.

The military planning comes as the US has become increasingly concerned that a further Russian invasion of Ukraine could happen at any time and on short notice.

"When we said it was imminent, it remains imminent," White House press secretary Jen Psaki said during a daily briefing on Tuesday. "But again, we can't make a prediction of what decision President Putin will make. We're still engaged in diplomatic discussions and negotiations."

Ukrainian officials pushed back on Psaki's language on Tuesday, calling the situation with Russia "dangerous" but not "imminent."

A source close to Ukrainian leadership said Tuesday that the defense and intelligence chiefs are analyzing satellite images of Russian forces "from US and other western agencies" on an hourly basis, but are not yet seeing Russia "getting into combat mode, or positioning themselves to attack."

If any Russian order to attack is given, the source added, Ukraine believes it would still take between one and two weeks for Russian forces near the border to be ready.

In its written responses to Russia's security demands, which US officials could present to the Kremlin as soon as Wednesday, the US is unlikely to allow any room for negotiation on NATO's open-door policy, which is President Vladimir Putin's central grievance. For that reason, there is some concern within the administration that Moscow will use the US response as a pretext to say diplomacy has failed.

CORRECTION: This story has been updated to clarify that the US and allies are discussing deployments of approximately 1,000 troops to Eastern European countries including Romania, Bulgaria, and Hungary.