US and coalition forces could have done more to decrease civilian harm in 2017 battle for Raqqa, Syria, think tank report finds 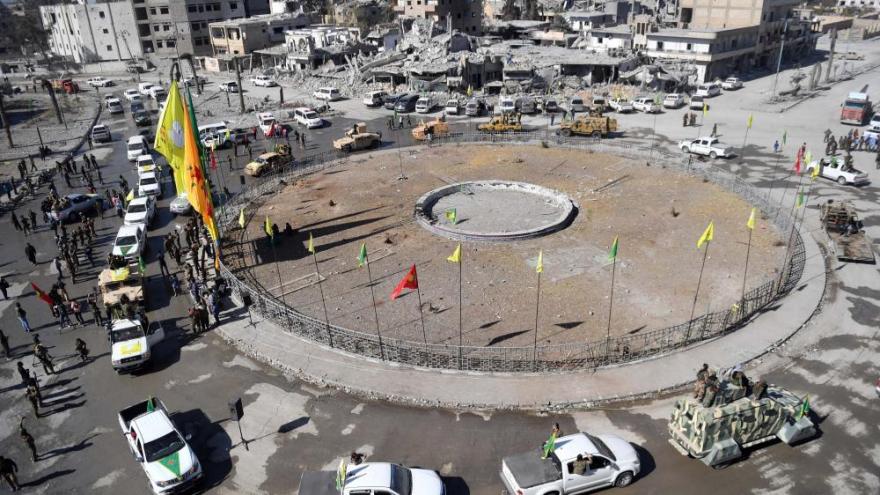 Female fighters of the Syrian Democratic Forces (SDF) gather during a celebration at the iconic Al-Naim square in Raqqa on October 19, 2017, after retaking the city from Islamic State (IS) group fighters.

(CNN) -- US and coalition forces that fought in Syria in 2017 to recapture the city of Raqqa from ISIS could have done more to decrease harm done to civilians living in the city during the months-long battle, a think tank report released on Thursday found.

Strategic choices the US and coalition forces made in the battle, like choosing to encircle the city and focus primarily on an air campaign in order to have fewer troops on the ground and decrease risk to them, ultimately had a greater impact on civilian harm, the report from the RAND Corporation said. The report was sponsored by the Department of Defense Office of the Undersecretary for Policy, Pentagon spokesman John Kirby said Thursday.

The choice to encircle the city was a "more aggressive approach," that likely made it harder to create "civilian exit corridors" and may have caused ISIS to go further into the "densely-populated heart of the city," the report said.

"US forces faced a considerable risk trade-off in conducting what was primarily an air campaign against ISIS in Raqqa and relying only on a limited ground presence," the report said. "Having more ground forces... could have improved US and coalition capabilities to mitigate and respond to civilian harm through interactions with local populations inside Raqqa."

The battle for Raqqa took place from June 2017 through October 2017, when US-backed coalition forces re-took control of the city from ISIS. Raqqa was the last major stronghold held by ISIS in Syria at the time.

The report comes as the Defense Department has faced increased scrutiny over civilian casualties caused by US military actions. During the US military withdrawal from Afghanistan in August, the US conducted a botched drone strike in Kabul that killed 10 civilians, seven of them children. The Defense Department also ordered a review of a US airstrike in Syria that killed civilians in 2019 after a New York Times investigation.

Secretary of Defense Lloyd Austin ordered a review of the military's handling of civilian casualty incidents in January after the release of a congressionally mandated RAND Corporation report.

This report will be one of the "key resources" the department uses to develop their own "civilian harm, mitigation and response action plan" that the secretary ordered it to develop in January, Kirby said Thursday.

"Safeguarding civilian life is a strategic and moral imperative. You've heard Secretary Austin say that many times. The department appreciates the insights that this report offers, he appreciates all the work that RAND put into it, and we know it'll help inform our own work as we continue to try to improve our approach to civilian harm mitigation and response going forward," Kirby said.

This report on the battle for Raqqa found that while the Department of Defense "abided by its policies and procedures, which go beyond the law of war, at multiple levels to help protect civilians during armed conflict," they could have done more to prevent civilian harm during this conflict.

The term civilian harm refers to more than just the number of civilians killed. It also encompasses how civilians will be impacted from the destruction of the military's actions, meaning destruction of civilian and residential structures are considered in the overall impact to civilians as well as displacement of populations. Because a significant amount of Raqqa's infrastructure, including residential and civilian structures, was destroyed or damaged, there was a greater impact on civilian harm in the battle, the report said.

"In Raqqa, the ration of structures damaged to civilian causalities was about three to one," the report said.

The report recommends the Defense Department take a "broader approach to civilian harm that considers how strategic choices might affect civilian-harm risks," and "more intensively engage" non-governmental organization staffs "as part of their planning, operations and post-battle assessments." The recommendations were similar to the findings in the RAND study released in January on the military's overall handling of civilian casualties in conflict.

"DoD should harness considerable lessons learned from Raqqa -- and from past operations -- to better prepare ground forces, pilots, and targeting teams for future urban engagements," the report said.