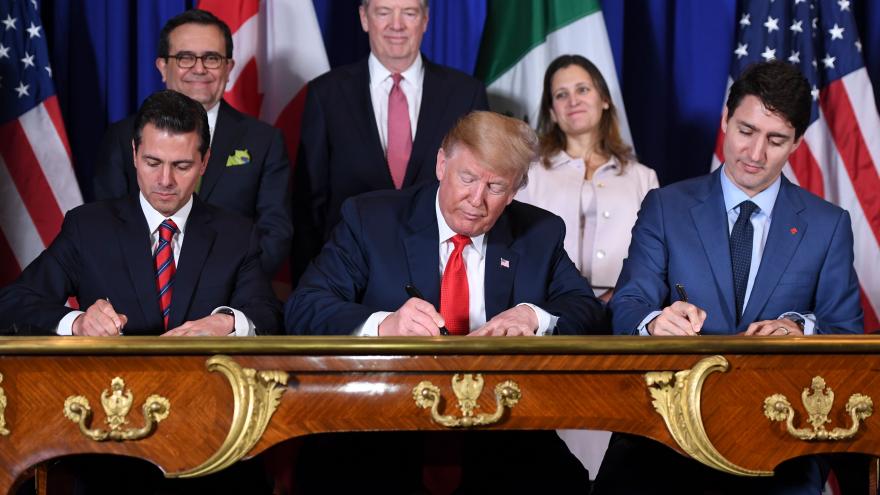 (CNN) -- Top trade negotiators from both the United States and Mexico reaffirmed Monday that the US-Mexico-Canada Agreement, known as USMCA, is a done deal -- despite complaints from Mexico over the weekend about a labor provision included in the bill unveiled by Democrats.

The trade agreement is still headed for debate and a vote in the US House later this week. The Senate is expected to take it up in January after impeachment.

Mexico's Undersecretary for North America, Jesus Seade, rushed to Washington to meet with trade officials Monday, after writing to US Trade Representative Robert Lighthizer to say he was "surprised" about the modifications to the USMCA, which has already been ratified in its original form by both Mexico and Canada.

But on Monday, Seade said he was "very satisfied" with the new terms.

At issue was a labor provision added in negotiations between Lighthizer and House Democrats that designates up to five inspectors from the United States Department of Labor to be stationed in Mexico working on implementing labor reform. Mexican officials said they were not consulted on this addition.

But Lighthizer clarified Monday that the five US workers would be providing technical assistance, disbursing capacity building funds, and providing assistance to a new US government interagency labor committee.

"These personnel will not be 'labor inspectors' and will abide by all relevant Mexican laws," he wrote in a letter to Seade, which his office made public.

At a press conference in Washington on Monday afternoon, Seade said he was pleased with the terms laid out in Lighthizer's letter regarding the five US workers.

"Their business is cooperation, assistance, disbursement of funds and reporting to the big interagency committee," he said.

Earlier in the day, top White House economic adviser Larry Kudlow was confident that Mexico's concerns would not hold up the deal.

"Mr. Lighthizer is gonna work that out," Kudlow, director of the economic council, told reporters, adding, "I know it's not going to stop this successful passage of USMCA."

The ratification of the trade agreement would be a huge victory for President Donald Trump as he heads into an election year. He made renegotiating the North American Free Trade Agreement a legislative priority and signed the deal, with his Canadian and Mexican counterparts, about a year ago -- but it still needs to be ratified by US Congress.

The agreement keeps most trade between the three countries tariff-free, addresses digital trade, and strengthens labor and environmental enforcement provisions. It also nudges open the Canadian dairy market to US farmers and requires more of a car's parts to be made in North America in order to remain free from tariffs, but generally the two deals are more alike than they are different.

The Trump administration finally reached a deal with House Democrats last week after months of negotiations for changes on Democratic priorities, including strengthening efforts to enforce labor rules.

Speaking during the daily press conference in Mexico City on Monday morning, Mexico's Foreign Secretary Marcelo Ebrard said the country will not accept US attachés in their territory -- but did not suggest there was a threat to the deal passing.

"Every country tries to advance their points," Ebard said adding, "we do not feel tricked because the deal was respected just as it was signed."