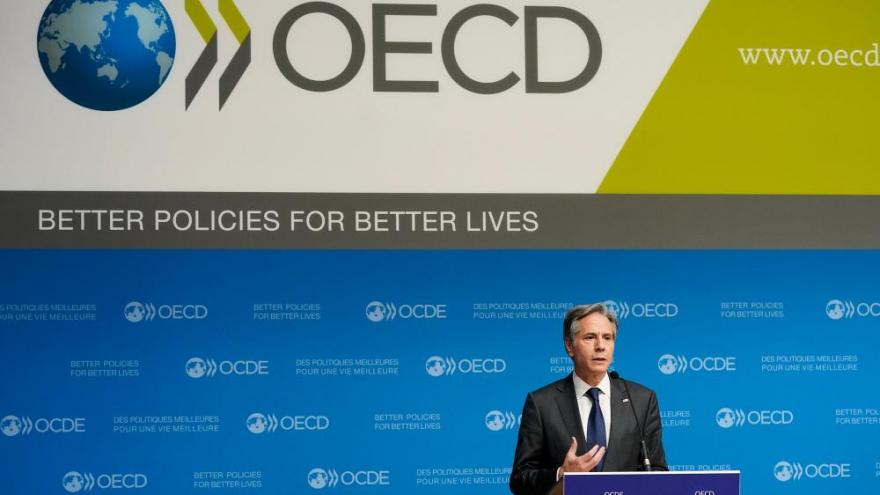 "The United States and Mexico recognize the need to adapt a bilateral security cooperation to address the concerns and priorities of both governments," the official told reporters. "Our security challenges are shared, and so is the responsibility for resolving them."

The new agreement will update or possibly replace the $3 billion Merida Initiative, a 2008 pact meant to fight drug trafficking and organized crime.

"When it comes to Merida, look, this is an initiative that has been on the books for, I think it is, 13 years now," State Department spokesman Ned Price told reporters at a briefing Thursday. "We believe we are due for an updated look at our bilateral security cooperation, and we need an approach that addresses the concerns and the priorities of both governments, and this will really be one of the core elements of the discussions tomorrow."

A second senior administration official said the new approach to security will be "balanced and sustainable," and look not just at security challenges but the factors that create them.

The officials would not address operational priorities, but the second official said that Mayorkas was committed to a "humane approach to migration management" and a third senior administration official said work to pursue drug cartels would continue.

The framework will also address the flow of guns from the US into Mexico, an area of deep concern and frustration to Mexican officials.

The new agreement will "make clear the commitment of both countries, of course, especially the United States in this regard to work, to deal with the flow of arms into Mexico," the third official said. "That does require a collaborative effort. It requires work together on tracing firearms, on thinking through strategies to go after, that is, to investigate and prosecute traffickers and to see that they are held accountable on both sides of the border. I'm happy to say that's work that's already well underway."

This third official said that the new agreement "will allow us to learn from each other's prevention strategies, and it will also allow us to set enforcement priorities together, including with respect to trafficking and firearms, to illegal narcotics, to human trafficking and smuggling, to extraditions of criminals, and to money laundering and illicit finance. In both respects then, both in attacking crime, in attacking causes of crime, the framework marks a new beginning, a new beginning that will make the citizens of both countries safer," the third administration official said.

The officials would not comment on whether a dispute over visas for US Drug Enforcement Agency officers would be discussed.

They also declined to say how much funding would go into the new agreement, saying that they want the "needs and details" of the work to drive the numbers and resources that are needed.

Price said the US hopes to preserve "significant gains" from the Merida Initiative, which some Mexican officials have criticized, arguing the infusion of money led to increased violence, arms trafficking and drug consumption.

Friday's high-level security meeting follows an economic dialogue between Biden administration officials and Mexican counterparts that had been suspended during the Trump administration.

"I've got to say that if the security dialogue matches in quality what we, we experienced with the with the economic dialogue that would be -- and I fully expect it will -- be very, very positive and also productive," Blinken said Wednesday at a press conference in Paris.

Speaking of the meetings in Mexico, Blinken added that he and the other US officials "will be spending time with President Lopez Obrador, as well as with our counterparts and we've got a very broad reaching agenda and I think it's evidence of the fact that the relationship -- while some issues like migration, understandably get a lot of headlines -- is incredibly broad and deep rooted and so I think we'll be covering a lot of ground."

Price said Thursday that it is not yet clear what form a new security agreement would take, but that the US wants to maintain the gains made through the Merida Initiative.

"It has enabled Mexican law enforcement agencies international accreditation at the federal and state levels, resulting in increased transparency, professionalization of institutions and respect for human rights," Price said. "And our security cooperation has strengthened as threats from fentanyl and illicit finance have evolved. So, all of this will be on the table and more."

"We want to see to it that those gains are preserved, that that cooperation is deepened and that we have an updated approach that accounts for the threats of today and the threats that have evolved over the course of the some 15 years that Merida has been in place," Price said.

This story has been updated with additional reporting Thursday.