US and Taliban negotiate proposal for seven day reduction in violence 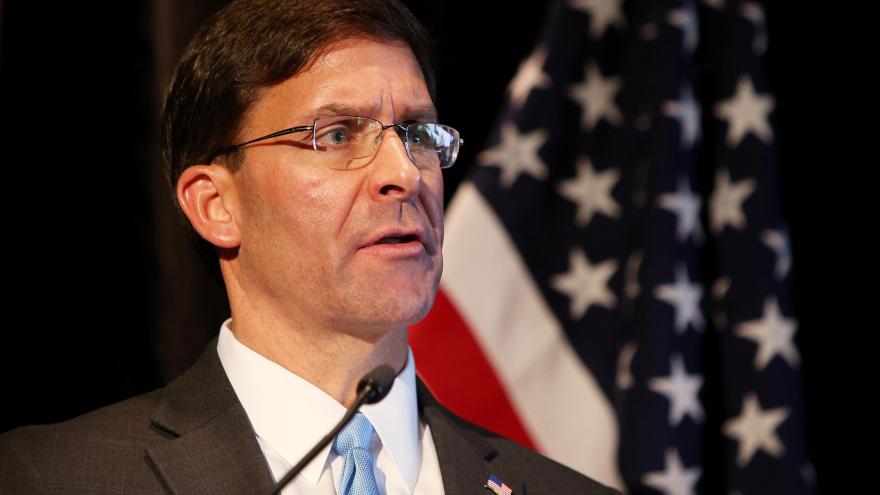 (CNN) -- Secretary of Defense Mark Esper announced Thursday that the US and the Afghan Taliban "have negotiated a proposal for a seven day reduction in violence."

"The United States and the Taliban have negotiated a proposal for a seven day reduction in violence. I'm here today consulting with Allies about this proposal and we've had a series of productive bilateral and collective meetings about the path forward," Esper said, speaking from NATO headquarters.

"We've said all along that the best if not only solution in Afghanistan is a political agreement. Progress has been made on this front, and will have more to report on that soon, I hope," he added.

Esper said the proposal will be conditions based.

CNN reported earlier this week that the Trump administration is seeking to announce a deal to deescalate violence with the Taliban as soon as this week, according to two US defense officials familiar with the discussions.

The prospective deal is being described as a "reduction in violence announcement," which would call for a ceasefire period between the coalition and the Taliban, with hopes of a peace deal being reached in the near future.

"We hope we can get to a place where we can get a significant reduction in violence not only on a piece of paper but demonstrated, the capability to actually deliver a serious reduction in violence in Afghanistan and if we can get there, if we can hold that posture for awhile, then we'll be able to begin the real, serious discussion which is all the Afghans sitting at a table, finding a true, reconciliation path forward," Secretary of State Mike Pompeo said Thursday.

The US is aiming for a peace deal to help execute President Donald Trump's desire to withdraw US troops from Afghanistan. The first step is expected to reduce the current level of troops from 12-13,000 to 8,600.

Asked Wednesday about the prospect of reducing the number of US forces in Afghanistan in the country, Esper said he was confident that would happen.

"We have said consistently based on the recommendations of the commanders in the field that we are comfortable going down to an 8,600 number because we are confident we can accomplish our tasks at that number," he said.

The news of a negotiated proposal to decrease violence comes amid continued attacks in the country. Last month, the special inspector general for Afghanistan reconstruction assessed that there had been a record-high number of attacks carried out by the Taliban and other anti-government forces during the last three months of 2019.

"Taliban attacks continued at a high tempo. According to data provided by the NATO Resolute Support mission, enemy-initiated attacks during the fourth quarter of 2019 were at the highest level for a fourth quarter of any year since recording began in 2010," the report said, referring to the NATO-led mission in Afghanistan aimed at training and advising local Afghan forces.

Trump has long sought a comprehensive agreement with the Taliban, which could bring about a diminished US presence in the region. The US and the Taliban reached an agreement "in principle" in early September 2019, but shortly thereafter, Trump called off peace talks and said he canceled a secret Camp David summit with the militant group after they took credit for a deadly attack that killed a US service member.

In a surprise visit to Afghanistan in November Trump announced that the talks had restarted. However, in December, Special Representative for Afghanistan Reconciliation Zalmay Khalilzad noted that the formal negotiations were on a "brief pause" after a Taliban attack on Bagram "recklessly killed two and wounded dozens of civilians."