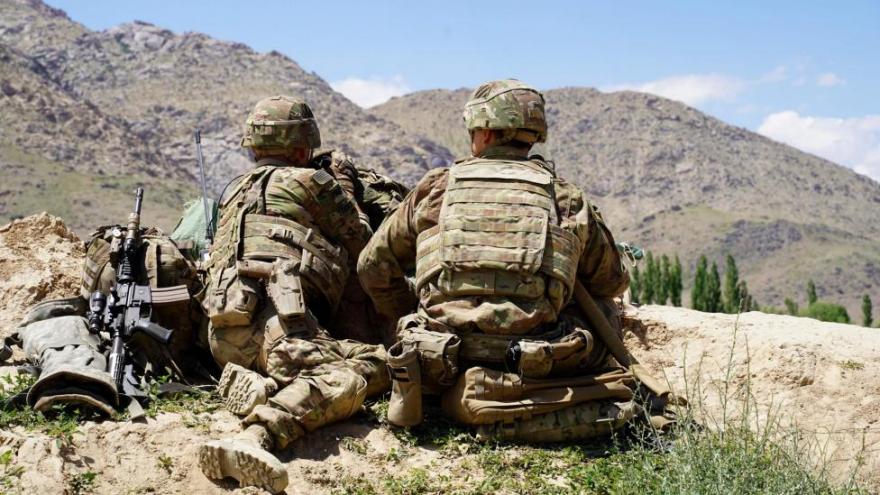 After a week-long "reduction in violence," the US and Taliban signed a historic agreement Saturday which sets into motion the potential of a full withdrawal of US troops from Afghanistan and could pave the way to ending America's longest-fought war.

(CNN) -- After a week-long "reduction in violence," the US and Taliban signed a historic agreement Saturday which sets into motion the potential of a full withdrawal of US troops from Afghanistan and could pave the way to ending America's longest-fought war.

The agreement was signed in Doha, Qatar, by US Special Representative for Afghanistan Reconciliation Zalmay Khalilzad -- the chief US negotiator in the talks with the Taliban -- and Mullah Abdul Ghani Baradar -- the Taliban's chief negotiator. Secretary of State Mike Pompeo witnessed the signing.

The "Agreement for Bringing Peace to Afghanistan" outlines a series of commitments from the US and the Taliban related to troop levels, counterterrorism, and the intra-Afghan dialogue aimed at bringing about "a permanent and comprehensive ceasefire."

"This is a hopeful moment, but it's only the beginning," Pompeo said at a news conference in the Qatari capital Saturday. "There's a great deal of hard work ahead on the diplomatic front."

The Taliban "will start intra-Afghan negotiations with Afghan sides on March 10, 2020," according to the text of the agreement.

The agreement lays out a 14-month timetable for the withdrawal of "all military forces of the United States, its allies, and Coalition partners, including all non-diplomatic civilian personnel, private security contractors, trainers, advisors, and supporting services personnel."

An initial drawdown to 8,600 troops would occur within the first 135 days, according to the agreement. US officials have stressed that any downsizing of US troop presence would be "conditions based."

Speaking at the signing ceremony in Doha, Pompeo said the US "will closely watch the Taliban's compliance with their commitments, and calibrate the pace of our withdrawal to their actions."

"This is how we will ensure that Afghanistan never again serves as a base for international terrorists," Pompeo said.

President Donald Trump on Saturday told reporters at a White House news conference in Washington that he would be "meeting personally with Taliban leaders in the not too distant future" following the signing of the agreement. Taliban leaders and Trump could meet as early as next week, a source close to the Taliban with knowledge of US-Taliban talks told CNN.

The source said the talks could take place in the US. CNN has reached out to the White House for comment.

"We'll be very much hoping that they will be doing what they say they're going to be doing" under the agreement, Trump said at the briefing.

"Everybody wanted this to happen," Trump added.

Trump said he wanted congratulate those US officials involved in the agreement as well as his Afghanistan counterpart.

What the agreement says

A senior administration official who briefed reporters last week acknowledged that "people are concerned about the historic relationship between the Taliban and al-Qai'da."

"We think this is a decisive and historic first step in terms of their public acknowledgment that they are breaking ties with al Qaeda. That's going to be a work in progress," they said.

The agreement also calls for the release of 5,000 Taliban prisoners and 1,000 "prisoners of the other side" on the first day of intra-Afghan negotiations.

"The relevant sides have the goal of releasing all the remaining prisoners over the course of the subsequent three months. The United States commits to completing this goal," the text states.

In a news conference following the signing, Pompeo said that, "if the Taliban do not uphold their commitments, Trump and his team will not hesitate to do what we must do to protect American lives."

While Pompeo was in Doha, Secretary of Defense Mark Esper was in Kabul, Afghanistan, on Saturday for a joint declaration ceremony with Afghan and NATO officials, including Afghan President Ashraf Ghani and NATO Secretary General Jens Stoltenberg. Esper said that there is "great hope" about Afghanistan's future.

"Afghanistan deserves a chance to enjoy the security that comes from peace and stability, this will only happen if Afghans join together to embrace this opportunity," Esper said.

The signing of the US-Taliban agreement sees the realization of a campaign promise for Trump, who has sought to diminish US involvement in wars overseas.

"If the Taliban and the government of Afghanistan live up to these commitments, we will have a powerful path forward to end the war in Afghanistan and bring our troops home," Trump said in a statement Friday. "These commitments represent an important step to a lasting peace in a new Afghanistan, free from Al Qaeda, ISIS, and any other terrorist group that would seek to bring us harm."

The US has been at war in Afghanistan since 2001. Saturday's agreement in Doha came after more than a year of on and off negotiations with the militant group. The two sides had reached "an agreement in principle" in early September 2019, Khalilzad said at the time. Shortly thereafter, Trump called off the talks and said he canceled a secret Camp David summit with the militant group after they took credit for a deadly attack in Kabul that killed a US service member.

In a surprise visit to Afghanistan in November, Trump announced that the talks had restarted. The US President made the announcement shortly after the Taliban released an American and Australian professor in exchange for the release of three Taliban prisoners by the Afghan government. The State Department announced in early December that Khalilzad had rejoined talks with the Taliban in the Qatari capital.

Members of Congress and regional experts had raised concerns about the deal prior to the signing. On Wednesday, Rep. Liz Cheney led a group of 21 other Republican lawmakers in expressing "serious concerns" about the anticipated agreement.

In a letter to Pompeo and Esper, they called for the full publication of the deal and wrote that they are "are seeking assurances that you will not place the security of the American people into the hands of the Taliban, and undermine our ally, the current government of Afghanistan."

A senior administration official said last week that "there are parts of this agreement that are not going to be public but those parts don't contain any additional commitments by the United States whatsoever," but rather they will contain "some confidential procedures for implementation and verification of the agreement itself."

Following its signing, Sen. Lindsey Graham, expressed mild support as well as some skepticism about the agreement.

"I am very suspect of the Taliban ever accepting the Afghan constitution and honoring the rights of religious minorities and women," the South Carolina Republican and staunch Trump ally, said. "Time will tell if reconciliation in Afghanistan can be accomplished with honor and security, but after more than 18 years of war, it is time to try."

The text of the agreement does not contain any specific language regarding the protection of women or civil society.

In his remarks in Doha Saturday, Pompeo called on the Taliban to "embrace the historic progress obtained for women and girls, and build on it for the benefit of all Afghans."

"The future of Afghanistan ought to draw on the God-given potential of every person," Pompeo said.

The senior administration official told reporters last week that women will "have a seat at the table during the negotiations."

Those negotiations in March are likely to take place in Oslo, Norway, a second senior administration official said. The details are still being sorted out in terms of the negotiation's design, and who will specifically be at the table for the Afghan side.

There were a record high number of attacks carried out in Afghanistan last year by the Taliban and other anti-government groups. The violence in Afghanistan has continued this year, with the Taliban killing two US service members earlier this month.

The second senior administration official acknowledged last week that the path forward is not going to be "easy" or "perfect."

"It's not like the Taliban are endlessly evil or that this will bring flowers and roses and doves overnight," they said. "We and the Afghans have been in this conflict for decades. There are patterns of behavior, psychological views. People are going to have to begin making a big shift."

This story has been updated with additional details from the agreement.