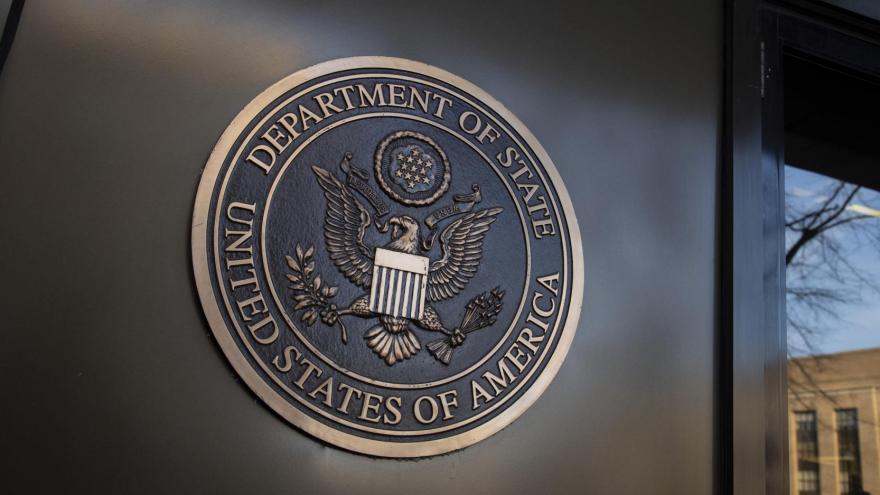 The State Department reportedly told Congress that it has approved export licenses for Estonia, Latvia and Lithuania, which will allow the countries to transfer US-origin weapons to Ukraine, and pictured, the U.S. Department of State seal, in Washington, D.C., on February 21, 2021.

(CNN) -- The United States accused Russia of recruiting current and former Ukrainian government officials to attempt to take control of Ukraine's government as it unveiled new sanctions on Thursday.

"Russia has directed its intelligence services to recruit current and former Ukrainian government officials to prepare to take over the government of Ukraine and to control Ukraine's critical infrastructure with an occupying Russian force," the Treasury Department said in a statement, as it rolled out sanctions against four current and former Ukrainian officials it said were involved in Kremlin-directed influence activities to destabilize Ukraine.

The Treasury said the four individuals -- two of whom are current members of Ukraine's Parliament --- were acting under the direction of a Russian intelligence service sanctioned by the US and played "various roles" in Russia's "global influence campaign to destabilize sovereign countries in support of the Kremlin's political objectives."

Russia recruits Ukrainian officials in top positions to gain access to sensitive information, threaten Ukraine's sovereignty and then leverage these officials to instigate unrest ahead of a potential Russian invasion, according to Treasury.

The department said that the action taken Thursday is "separate and distinct" from the "broad range of high impact measures" the US is prepared if Russia invades Ukraine.

US Secretary of State Antony Blinken said in a statement that the sanctions are "in line with other actions that we have taken to target Russian disinformation campaigns."

"The United States will continue to take steps, including through actions like this one, and in partnership with the Ukrainian government, to identify, expose, and undercut Russia's destabilization efforts in Ukraine," he added.

The Biden administration has warned that Russia could invade Ukraine at any point but is also pursuing diplomatic efforts to convince Moscow to deescalate the situation, with Blinken set to meet with Russian Foreign Minister Sergey Lavrov on Friday to see if there's opportunity for common ground.

US approves transfer of American weapons from Baltic states to Ukraine

As the concerns grow about a possible Russian invasion, the State Department told Congress that it has approved export licenses for Estonia, Latvia and Lithuania, which will allow the countries to transfer US-origin weapons to Ukraine, according to an administration official, a State Department official and a congressional aide familiar with the matter.

The approvals -- which occurred in recent days -- are a signal that the US is looking to inflict a greater cost on Russian President Vladimir Putin if he goes forward with the invasion. President Joe Biden said Wednesday he expects Putin will "move in" to Ukraine and Blinken said this week that the Kremlin has plans for sending more troops to the Ukrainian border.

The weapons include highly sought after, American anti-aircraft weapons systems from Latvia and Lithuania that would help Ukraine fend off Russian aircraft that some officials and experts believe would lead the way in the early stages of a Russian invasion. Estonia was given approval to transfer anti-tank Javelin guided missile systems, which the US has provided Ukraine with in the past.

It's unclear when the weapons will arrive in Ukraine, the senior administration official said the timing -- as well as the price for Ukraine -- would be up to the countries who were given the approval.

The Biden administration is also working on transferring five Russian-made helicopters into Ukrainian control, the same official said. A notification has been sent to Congress for the helicopters, Mi-17s, which are already in Ukraine for maintenance after being pulled out of Afghanistan during the withdrawal there.

The State Department cited close coordination with European countries and Ukraine when asked about the export licenses transfer.

"European allies have what they need to move forward on additional security assistance from Ukraine in the coming days and weeks," said a State Department spokesperson. "We are in close touch with our Ukrainian partners and our NATO Allies on this, as well as utilizing all available security cooperation tools available to us including expediting authorized transfers of US origin equipment from other allies and partners via our Third Party Transfer process and Excess Defense Articles from DoD inventories, among other mechanisms."

In late December, the Biden administration quietly approved an additional $200 million in security assistance to Ukraine, which authorized the shipment of defensive equipment that includes small arms and ammunition, four people familiar with the matter confirmed to CNN at the time.

But after multiple diplomatic meetings between the US, NATO, European officials and Russian officials ended last week without any significant breakthroughs, the Biden administration began weighing more military support for Ukraine amid more warning signs that Russia was prepping for an invasion. Biden has ruled out sending US combat troops to Ukraine to defend the country from a Russian invasion.

Russia has amassed about 100,000 troops to the border it shares with Ukraine, which Blinken said Wednesday Russia could double in "relatively short order." Russia plans to also conduct joint military exercises with Kremlin ally Belarus, prompting further concerns from Ukraine that a new potential front line has emerged along its northern border.

Biden on Wednesday acknowledged disunity within NATO over how to respond to a "minor incursion" from Russia, an admission that stunned and shocked Ukrainian officials in Kyiv.

On Thursday, Ukraine's foreign minister Dmytro Kuleba told The Wall Street Journal that Biden's comments could act as an invite to Moscow to attack.

"Speaking of minor and full incursions or full invasion, you cannot be half-aggressive. You're either aggressive or you're not aggressive," Kuleba told the newspaper. "We should not give Putin the slightest chance to play with quasi-aggression or small incursion operations. This aggression was there since 2014. This is the fact."

In a seeming response to Biden's remarks, Ukrainian President Volodymyr Zelensky on Thursday wrote on Twitter, "We want to remind the great powers that there are no minor incursions and small nations. Just as there are no minor casualties and little grief from the loss of loved ones."

Asked about Biden's remarks distinguishing the consequences of a "minor incursion" against Ukraine by Russia, Blinken said on Thursday, "if any Russian military forces move across the Ukrainian border and commit new acts of aggression against Ukraine, that will be met with a swift, severe, united response from the United States and our allies and partners."

Blinken, who has been traveling Europe this week for meetings on the Russia-Ukraine crisis, also dismissed suggestions that the US and allies' providing defensive military equipment to Ukraine escalates tensions with Russia.

"The idea that the provision by the United states, by European countries, by NATO, of defensive military equipment to Ukraine is somehow provocative or cause for Russia's actions has the world upside down," he told reporters during a press conference in Berlin.

He added that the US is trying to ensure that "Ukraine has the means to defend itself, and that might perhaps deter further aggression by Russia."