US Army and FAA investigating military flyover of NFL game 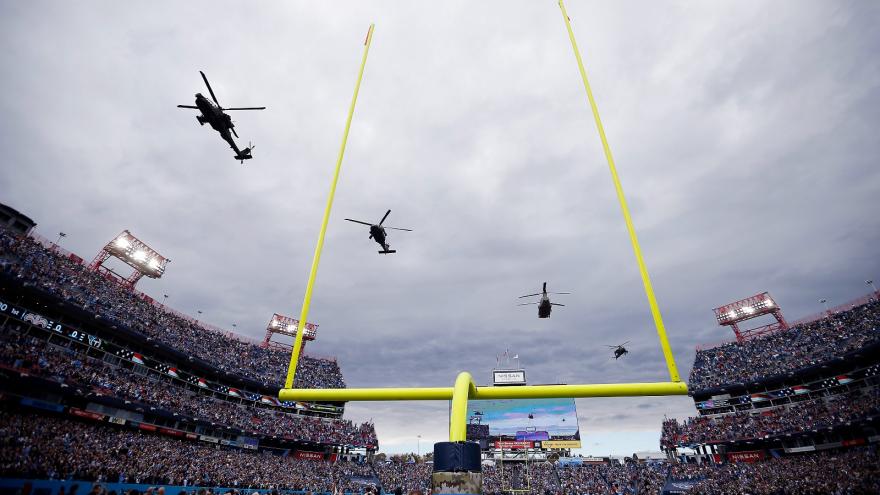 (CNN) -- The US military and the Federal Aviation Administration are reviewing a flyover of an NFL game last month to determine if the military helicopters flew too low over civilians in violation of aviation regulations.

A military inquiry is underway by the 101st Airborne Division to determine if members of its combat aviation brigade violated any FAA rules when they flew very low over Nashville's Nissan Stadium during a game between the Tennessee Titans and the New Orleans Saints.

"The 101st Airborne Division is conducting a commander's inquiry into the flyover that occurred on November 14," according to Lt. Col. Kari McEwen, a spokeswoman for the elite division.

Four helicopters from the division flew extremely low over the stadium at the start of the event. Video appears to show them flying as low as the top of the upper seat deck.

The military inquiry was ordered by the commanding general of the division, Maj. Gen. Joseph McGee, and is expected to be quickly concluded, two military officials said. If violations of flight rules are found, McGee will then have to decide on further action.

Military flyovers at sporting events are very common and used to build community relations, according to several defense officials. But in commercial US airspace the military is required to obey FAA rules and demonstrate they are flying safely without risking civilians.

A key question for the inquiry will be whether the unit violated safety protocols. Under FAA rules, helicopters are granted more flexibility on their flights than fixed wing aircraft because they can quickly maneuver, but they still must ensure safety for civilians on the ground.

Under FAA regulations, aircraft over congested areas must operate at least 1,000 feet above the highest obstacle with a horizontal radius of 2,000 feet. Helicopters, according to the FAA, may operate at less than those minimums provided that crews comply with any routing or altitudes ordered by FAA.