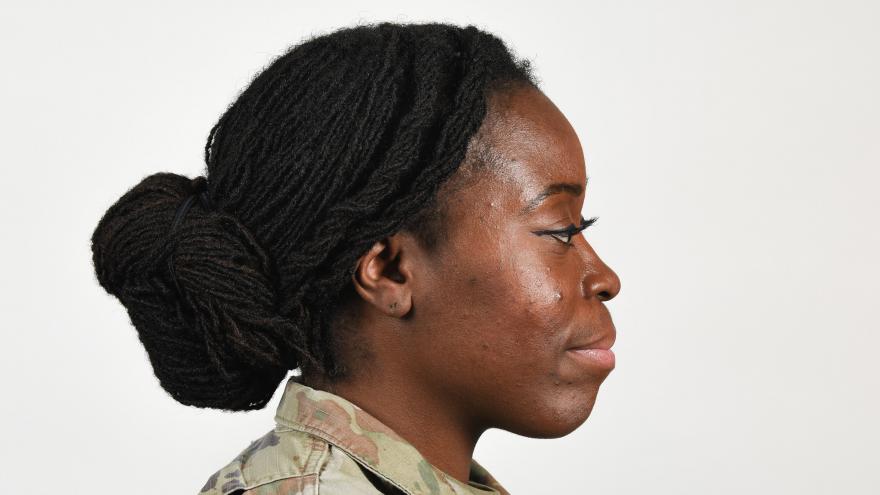 (CNN) -- The US Army announced a series of new grooming policies on Tuesday that will allow soldiers to wear ponytails, locs, lipstick and even earrings.

According to the new policy, women can wear nail polish as long as the colors are deemed "acceptable" and male soldiers are authorized to wear clear nail polish. Soldiers can also highlight their hair as long as they choose a natural color. Certain colors like purple, pink, blue, green, orange, bright red and fluorescent or neon colors are not allowed.

The current policy will also lift restrictions on soldiers braiding, twisting, locking, or cornrowing their hair, although it does set out some specifications for doing so. The new guidelines will go into place in late February.

A review of the policy was initially ordered last year by then acting Secretary of Defense Mark Esper in an effort to address race and inequality in the military.

The new policy also removes offensive language like "Fu Manchu" and "Mohawk" from its wording. In a presentation given by US Military leadership, officials explained that the "mohawk hairstyle takes its name from the people of the Mohawk nation. Fu Manchu has been considered offensive to Asian culture."

The push for inclusiveness and equality when it comes to hair has recently been making its way across the US, as seven states have passed legislation to ban natural hair discrimination known as The Crown Act.

Sgt. Maj. of the Army Michael A. Grinston went into detail about the policy revision process in a Twitter thread.

"I believe we took a good step forward with these changes. I'm proud of the effort that went into this, but the conversation isn't over. We are a learning organization, and it won't be another 5 years before the grooming standard is addressed again," Grinston tweeted.

A committee of 17 members, made up of 15 women and 2 men who were mostly people of color, voted on the changes. The new recommendations were based on evaluations from dermatologists, psychologists and an equal opportunity adviser tasked with exploring how diseases like alopecia can be caused at higher rates in certain races and how certain words can have a psychological effect.

"Just because it doesn't look like you or act like you doesn't mean it's right or wrong. That is the whole point of being inclusive," Grinston said during a video town hall announcing the changes.

As for the men in the Army who are wondering if beards will be allowed, Grinston had a short answer: "No."