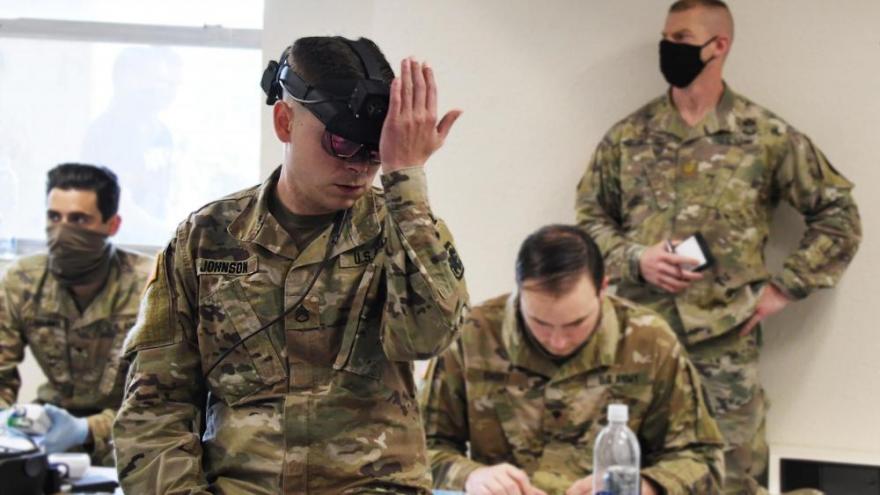 The military's integrated Visual Augmentation System (IVAS), field goggles that are being adapted to detect body temperatures amid the coronavirus pandemic.

(CNN) -- The US Army is asking technology companies to develop wearable sensors to detect early symptoms of coronavirus. This week they invited initial proposals for a $25 million contract to develop a device that uses existing technology as much as possible.

"There is a dire and urgent need for development of rapid, accurate wearable diagnostics to identify and isolate pre-symptomatic COVID-19 cases and track/prevent the spread of the virus," the Army said in an initial solicitation that was issued through a medical consortium.

Wherever the sensor is worn on the body, possibly on the wrist like a watch or on a shirt or belt, the aim is it will provide indicators of a fever, respiratory difficulties, "molecular biomarkers" of exposure to the virus and even the presence of antibodies against it.

If symptoms are detected then the service member can be fully tested, isolated and receive medical attention if necessary.

It's all part of a broader military effort to contribute to efforts to battle the virus on everything from vaccine research to sewing face coverings. Many of the initiatives are similar to what is happening in civilian society, but there are efforts to adapt emerging battlefield technology to take on the pandemic.

An Army team based at Fort Benning, Georgia, in charge of ensuring advanced warfighting capabilities for soldiers in close combat has adapted goggles used in battle to take the temperature of 300 troops in 25 minutes. The concept is important for high traffic areas such as public transportation, airports and buildings -- as well as for the safe movement of large numbers of military personnel, especially new recruits who may need to be screened and tested multiple times.

The group was tested as the Army Infantry School was getting ready for additional training but needed a temperature check as an initial screening measure. The screeners were provided with a prototype of the Integrated Visual Augmentation System (IVAS), goggles designed for soldiers to keep their eyes on a target while receiving information about what they are focused on.

IVAS has a suite of heat and low light sensors along with a Microsoft software application for the battlefield. One of the project managers Tom Bowman says he realized the digital thermal sensors could quickly be modified to detect body temperatures. Four days later, Microsoft and the Army "loaded in a new software application," which adapted the goggles to read body temperatures at a safe distance with little to no contact.

In addition, a system with a tripod mounted infrared sensor to measure body temperature is being installed at the Pentagon where eventually more than 20,000 people will return to work. The system scans for just a second or two before they enter the building.

Eventually more than 20 systems will be activated, including at the Pentagon's entrance and exit next to the Metro, one of the most heavily trafficked areas. Army officials tell CNN the units are calibrated for weather so even if it a hot summers day, they will be able to detect someone running a fever and refer them for medical testing to see if they have the virus.