US Army warns about fake text messages about military draft 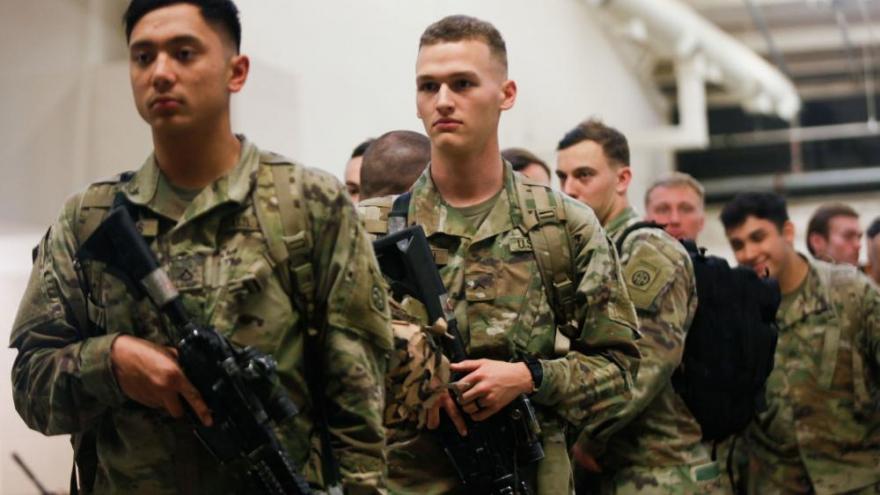 The US Army is warning Americans about a wave of "fraudulent text messages" falsely telling Americans they have been drafted into military service.

(CNN) -- The US Army is warning Americans about a wave of "fraudulent text messages" falsely telling Americans they have been drafted into military service.

The fake texts instruct the recipient to report to the nearest Army recruiting branch "for immediate departure to Iran," and warn about multiple attempts to contact recipients, in at least one case warning "you'll be fined and sent to jail for minimum 6 years if no reply."

The messages appear to have been sent to individuals nationwide amid mounting military tensions between Washington and Tehran. The Pentagon said last week following the US airstrike that killed Iranian General Qasem Soleimani that it is deploying thousands of additional troops to the Middle East, catching military families off guard.

Screenshots of the texts provided by US Army Recruiting Command to CNN showed spelling and grammatical errors, indicating they were not official correspondence. Some of the fake texts used real names of Army recruiting commanders -- while others used fictitious names -- lending the false appearance of authenticity, said Kelli Bland, a spokeswoman for the US Army Recruiting Command.

It is unclear how many of these fake recruiting texts may have been sent, and Army security officials are still investigating the source, said Bland. So far there have been no reports of Americans showing up to recruiting branches as a result of the texts.

US military conscription was suspended in the 1970s. To resume the draft, Congress would need to enact legislation, according to the Selective Service System, the independent agency that would manage the draft in an emergency.

Last week, the Selective Service website crashed amid heightened searches, which the agency attributed to "the spread of misinformation" about the potential for a draft following the US strike.

"The Selective Service System is conducting business as usual," the agency said on its official Facebook page.

The fake messages could become the first test of a new law that aims to cut down on spammy texts and robocalls. Under the Pallone-Thune TRACED Act, which President Donald Trump signed into law last week, government regulators can go after robo-texters and seek fines of up to $10,000 per violation, said an aide to Massachusetts Democratic Sen. Ed Markey, a key architect of the legislation.

Markey was also one of the original co-authors of the Telephone Consumer Protection Act. That law would also potentially cover the fake texts if they were sent using an automatic dialer and without the recipients' consent, according to the Federal Communications Commission in a statement.

If the texts are coming from a spoofed phone number -- meaning the sender is impersonating somebody else -- the texts may violate the Truth in Caller ID Act, the FCC added.

The TRACED Act also newly authorizes telecom carriers to trace back fraudulent texts to their source, and the perpetrators could also be sued under state or federal fraud laws, said a Democratic aide to the House Energy and Commerce Committee, which helped craft the bill.