US assures Afghans it will not abandon them after peace deal 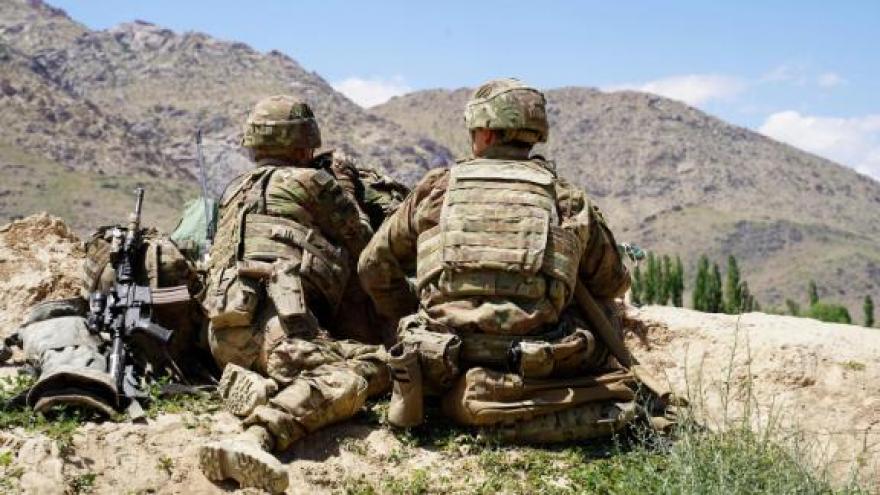 (CNN) -- As the United States finalizes its plans to reduce violence in Afghanistan, an Afghan source close to the negotiations has said that US officials in Munich, Germany, reassured Afghan President Ashraf Ghani and his team that America won't abandon them.

The source said that Americans told the Afghans: "We guarantee you if they [Taliban] break [terms of deal] US will have enough lethal power to destroy them, we are with the Afghan now and we will be with Afghanistan forever."

The source made the comments as NATO Secretary General Jens Stoltenberg said the US and NATO were prepared to reduce their military presence in Afghanistan if the Taliban demonstrated a willingness to reduce violence and come to the negotiating table.

"We are not leaving Afghanistan ... NATO has said, the US has said, we are prepared to adjust our presence if the Taliban demonstrates real will and capability to reduce violence," Stoltenberg said during his address at the Munich Security Conference.

"The aim of our presence in Afghanistan is to send the message to the Taliban that they will never win on the battlefield, but they have to sit down and make real compromises around the negotiating table," NATO's Secretary General added.

Responding to a question from the audience, Stoltenberg asserted that "at some stage the Afghans have to be in charge, fully, of their future," adding that it must be an "Afghan-owned" peace process.

Afghan officials have told their US interlocutors that time is needed "to recalibrate."

They want a more nuanced understanding of how the proposed "Meaningful Lasting Reduction in Violence" deal that the US have agreed to with the Taliban will work.

The source says the Afghans fully "support" what the United States is doing and "respect" their agreement with the Taliban, however they require more detailed information about how a reduction in violence would be implemented.

But questions remain over how the deal would be monitored and what its rules would be. The Afghan government will discuss this in detail with General Austin Scott Miller, US commander in Afghanistan, and it needs to cover a huge array of eventualities, the source says.

The source gave a number of examples, including:

These are just a few examples of the many different scenarios that could emerge. The source didn't say how long they thought the "recalibration" would take, but said they were confident that they trust the word of the Americans.

Originally the plan was for a "Reduction in Violence" (RIV) but the source says Trump decided it should be a "Meaningful Lasting Reduction In Violence" that would take place in a carefully sequenced series of steps:

First there would be a "Pre-RIV," then an RIV, followed by a signing ceremony. That period would be expected to last about 5 weeks. This would be followed by an "Advanced RIV" and then, if all went well, a ceasefire.

The Afghan government believes the Taliban are trying to exploit the RIV to their advantage, according to the source. They say the government picks up Taliban "chatter" in which the militants say they are winning the war. The source claimed the Taliban mood is "triumphant" and they are "trying to convince their fighters this [RIV with the US] is not a compromise but is a defeat of the western power." The Taliban tell their base "it is a matter of time before we are poised to take over the country," according to the source.

Fighters 'socialized' back into society

Despite the Taliban propaganda the source says the government assessment of the current Taliban mindset is that they are scared of peace because, once the war is over, their fighters become "socialized" back into society.

The source recalled the two-day ceasefire last year when the Taliban came into town to get ice creams, but after that time elapsed, the Taliban leadership had to tell their fighters to return to duty or be killed. Studies have shown most people in Taliban areas don't want war or to live under feared Taliban rule.

The government believes the Taliban will come to recognize it will never get their emirate and will never successfully run the country; not just because most people reject it but because it doesn't have the money, according to the source. It is only the Afghan government that can attract international aid money and support that help keep the country running, the source added.

The Afghan government led by President Ghani laid out its risk assessment and risk mitigation scenarios, in discussion with the US team in Munich.

"They have agreed they will sit at the other side of the table and talk," the source says.

"We guarantee you if they break [the terms of deal] US will have enough lethal power to destroy them, we are with the Afghan now and we will be with Afghanistan forever."

They said US officials have told them they "are not withdrawing" from Afghanistan, but the US is "giving a political settlement a chance." The source says they were assured by the US that "if the Taliban do not abide, we consider the deal broken and possibly increase troops."

The Afghans told the US team they want to be the implementing partner with the US on the deal hammered out with the Taliban, and have told them "forcefully" how to mitigate the risks by the recalibration, the source said.

They said it is the Afghan government's calculation that after the RIV deal is public, the Taliban will enjoy a five to eight-week spike in popularity as they milk the deal for propaganda purposes. After that the exuberance will dwindle, the Taliban won't be able to deliver on expectations, fighters won't want to go back to war, and the dynamic will be shifted.

The Afghan government's message to the American people is that the billions spent in Afghanistan have not been wasted, but they would be wasted if the US walked away, the source said. The money has created a strong partner for the US to achieve its aims in the region, the source added.

In a message that appears likely to please Trump, the source said that with the Afghans you get "bang for your buck." But we're not begging the Americans to stay or telling them what to do -- "we trust our own strength," the source added.

The deal with the Taliban, they said, is contingent on them publicly saying they will go after al Qaeda, which in real terms means the Taliban providing the United States with actionable intelligence to take down al Qaeda cells which the Taliban have been hosting for over two decades.

If current US plans remain in place, we can expect US troop levels to be scaled down and the CIA presence scaled up over the next 14 months, according to the source.

The Afghan government believes it has commitments from the US to support additional Afghan air force elements, commandos, counter-terrorism units and police that would have a strong focus towards counter-terror operations.

The situation, the source said, would be a new normal for Afghanistan, with degrees of clarity and of ambiguity. The Taliban's connections with narcotics would have to be addressed as well as its other organized crime activities, all of which reveal the scale of the proposition of ending four decades of conflict in Afghanistan.

They said the Afghan President describes the current US plan as "a view from 10,000 feet." The coming discussions they said will bring it down to ground level to determine exactly how it can be implemented.

The Afghan government believes it can help make the US plan work; "peace is not a gift of the Taliban" the source said, "peace will be the Taliban conceding to reality."