US authorities prepare as Iran vows revenge for Soleimani strike 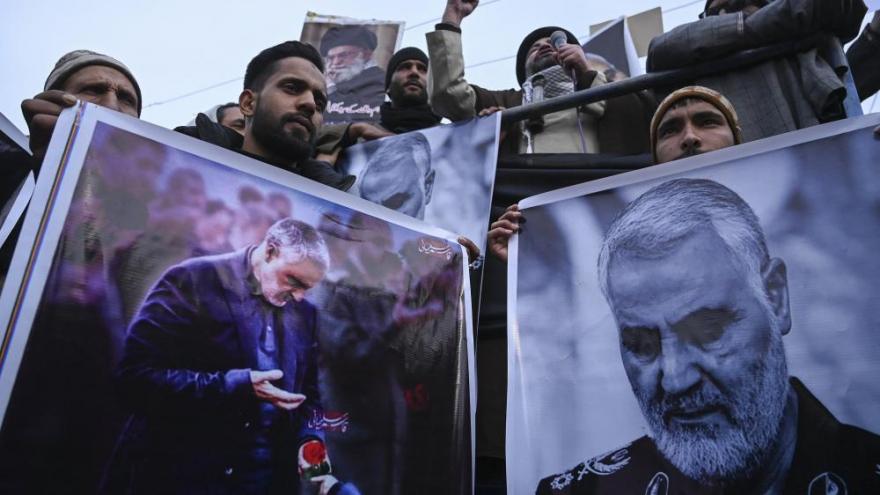 Protesters hold posters with the image of top Iranian commander Qasem Soleimani, who was killed in a US airstrike in Iraq, and Iranian President Hassan Rouhani during a demonstration in the Kashmiri town of Magam on January 3, 2020.

(CNN) -- US authorities are increasing vigilance and fortifying defenses as Iran warns of a "harsh revenge" in the aftermath of a US drone strike that killed Qasem Soleimani, the powerful commander of the country's elite Quds Force.

The major escalation by the US, conducted in Baghdad as tensions in the region flared following the Iranian-backed siege of the US embassy in Iraq, has inevitably invited Iranian retaliation, experts say, and national security officials in the US are preparing for attacks on multiple fronts, including American outposts abroad, soft targets in the US and in cyberspace.

Law enforcement officials said there is no indication of an active or imminent plot within the US, but local police in cities across the country announced on Friday that they were strengthening patrols to defend against potential violence inspired by the killing or even the activation of possible underground terrorist networks seeded by Iran in the US and across the world.

Meanwhile, FBI counterterrorism investigators were reviewing possible threats from supporters of Hezbollah, the Iranian-backed militia whose broad reach is known to extend outside of the Middle East to Europe, South America and the US, according to current and former US law enforcement officials.

Investigators are looking through tips and investigative leads and redoubling attention to suspects already on the FBI's radar to determine whether they require deeper scrutiny, a US official said.

"Iran has a worldwide reach through their clandestine networks and is capable of asymmetrical operations against their enemies: terrorism, proxy warfare, assassinations and kidnapping," said Christopher Costa, the former senior director for counterterrorism at the National Security Council under the Trump administration who now heads the International Spy Museum in Washington.

Hezbollah is believed to have secretly amassed caches of explosives in the West for potential attacks on soft targets, and American prosecutors have brought charges against Iranians and people linked to Hezbollah who were allegedly gathering intelligence on vulnerable public locations in the US.

In 2017, two men were charged by the Justice Department with quietly supporting the terror group for over a decade as they lived inconspicuous American lives.

A bigger concern, however, are possible threats to US diplomats and servicemembers -- as well as American citizens -- living in the Middle East, where Iran could more easily stage an attack, according to a law enforcement official and national security experts.

Iran and its proxies, particularly Hezbollah, have a history of attacks, including the Khobar Towers truck bombing in Saudi Arabia that killed US military members in 1996.

Hezbollah and Iranian-supported groups were also behind a series of bombings in the early-to-mid-1990s targeting Jewish organizations and Israeli diplomatic facilities in Argentina and elsewhere.

The group has a robust network of supporters who provide fundraising and other assistance in the US and other countries.

Law enforcement officials have also tracked their efforts to launder money through the drug trade in Colombia and Venezuela, as well as certain African countries.

The concern among American authorities has been that Hezbollah supporters could carry out attacks if US-Iran tensions boil over into broader conflict, current and former law enforcement officials say.

"We need to be at an increased security posture to protect against threats to our people in Baghdad and more broadly, we should consider risks beyond the immediate region given the penchant for proxies abroad," said Lisa Monaco, homeland security and counterterrorism adviser to President Barack Obama, in an email.

Officials at the Department of Homeland Security were considering whether to update a terrorism threat advisory in light of the attack, a senior DHS official told CNN.

Top DHS leadership convened after news of the US strike broke in Washington to assess potential new threats and responses by the agency, which oversees much of the defense of critical infrastructure points across the country, acting DHS Secretary Chad Wolf said in a statement.

Iran has steadily expanded its cyberspace capabilities, experts say. Once viewed as a third-rate digital power, the country is now considered at least a second-tier player, according to Adam Segal, director of the digital and cyberspace policy program at the Council on Foreign Relations.

Though lacking the punch of countries like China and Russia in the space, Iran is capable enough to "cause serious damage" to the United States and its many soft civilian targets, said Peter W. Singer, a strategist at the New America Foundation and the author of an upcoming book on infrastructure attacks. And, he added, Iran won't need to bother to conceal its activities.

In the past, Iran has largely kept its cyberspace offensives limited to the Middle East. But the country has increasingly probed western nations for vulnerabilities.

In 2015, US intelligence officials said Iran was behind a 2014 cyberattack on American casinos partly owned by billionaire Sheldon Adelson. The attack resulted in the theft of credit card data, Social Security numbers and driver's license information.

A year later, in 2016, the US government accused seven Iranians of hacking into dozens of American banks in 2012 and 2013, alleging millions of dollars in damage. The attacks spurred concerns that much of America's critical infrastructure — power grids, water systems and more — could be at risk.

Now, experts say that an Iranian cyberattack in retaliation for Soleimani's death is a "real possibility."

"The big question is will they do something symbolic, like the bank attacks, or try for both symbolic and disruptive, as they did with the Sands (casinos)," said James Lewis, director of the technology policy program at the Center for Strategic and International Studies.

As Iran plots its next steps, experts cautioned that the country was likely to act slowly and with an eye towards a more long term response.