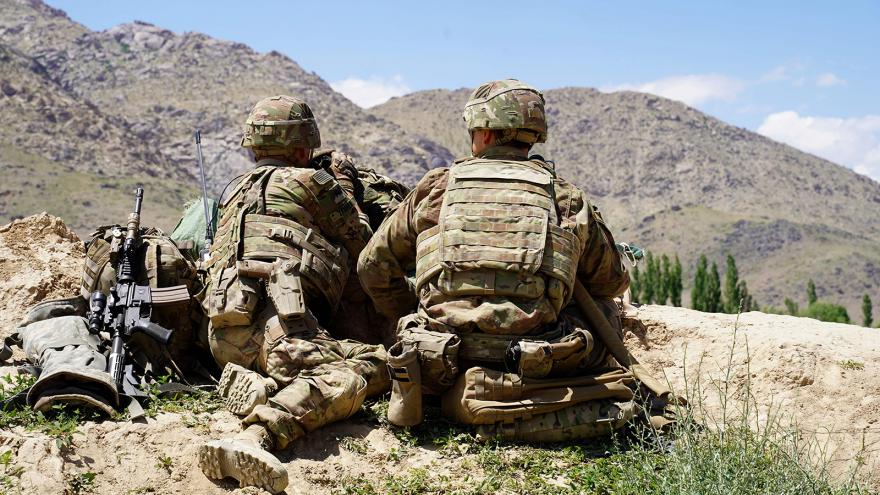 The US military withdrawal from Afghanistan is now underway with equipment being packed and shipped out, three defense officials tell CNN. - Thomas Watkins/AFP/Getty Images

(CNN) -- The US military withdrawal from Afghanistan is now underway with equipment being packed and shipped out, three defense officials tell CNN.

The Pentagon has also approved the deployment of hundreds of maritime, air and land forces to the region to ensure security for American and NATO forces as well as contractors as they withdraw, the officials said.

Secretary of Defense Lloyd Austin approved the extension of the USS Eisenhower aircraft carrier's mission to "remain in the Central Command area of responsibility for a period of time," and approved "the addition of some long-range bombers" to the region in preparation for US troops to withdraw from Afghanistan, Pentagon spokesman John Kirby said during a press briefing on Friday.

Two B-52 bombers have arrived in the region already, Kirby said.

The immediate focus is on continuing to ship out unneeded equipment and supplies that are either not being destroyed in place or transferred to Afghan forces, one of the officials told CNN. "Obsolete" equipment will be destroyed, the official said.

The movement of personnel out of Afghanistan will still not begin "for a few weeks," the official said, adding that the US will "retain our ability to defend the force and provide support" to Afghan units.

"I think it's reasonable to assume as I've said before that there could be temporary additional force protection measures and enablers that we would require to make sure again that this draw down goes smoothly and safely," Kirby said.

President Joe Biden formally announced his decision to end America's longest war last week, arguing that the decades-long conflict no longer aligned with American priorities. Those advocating against an immediate withdrawal, including some among Biden's team, are concerned the drawdown of American troops from Afghanistan could cause the government in Kabul to collapse and the Taliban to return to power.

The deadline Biden has set for troops to withdraw is absolute -- with no potential for an extension based on worsening conditions on the ground.

To ensure security once the troop withdrawal begins, US Central Command, which oversees Afghanistan, has received Pentagon approval to keep an aircraft carrier in the region, so fighter jets are as close as possible if airstrikes are needed to protect troops as they withdraw.

This is likely to now mean that the USS Dwight D. Eisenhower, the carrier that is already in the region, will be held in place and delayed in returning home, officials said.

Several hundred ground troops will also be sent to Afghanistan to provide "force protection" for troops leaving the nation. Under the Defense Department approval, no more than 1,000 ground forces will be sent.

There is particular concern about the safety of troops as they leave more remote locations around Kandahar, Jalalabad, and some special operations force locations in eastern Afghanistan.

Currently, there are 2,500 US conventional forces in Afghanistan plus hundreds of additional special operations forces that are not publicly acknowledged.

Officials are aware that sending more troops, even temporarily, leaves a larger footprint to be dismantled.

Additionally, bomber aircraft are expected to be placed on standby in the region as a deterrent to Taliban violence and be ready to be called in for airstrikes if needed. The military also plans to maintain combat air patrols over Afghanistan throughout the withdrawal to maintain security.

Several defense officials say that informally there will be an effort to conduct as much of the withdrawal as possible before the September 11 deadline set by Biden.

Gen. Frank McKenzie, the commander of US Central Command, told Congress Thursday that the US intends to maintain military influence and the ability to carry out air strikes in Afghanistan once troops are withdrawn from the country this year.

He told the Senate Armed Services Committee that primary drones used in Afghanistan are able to reach the country from the bases of US allies in the Gulf, McKenzie said.

There is no significant US military presence in the countries that surround Afghanistan that would allow for the basing of US forces, which McKenzie said US diplomats will look at the "art of the possible" to see if there are potential basing agreements with other countries.