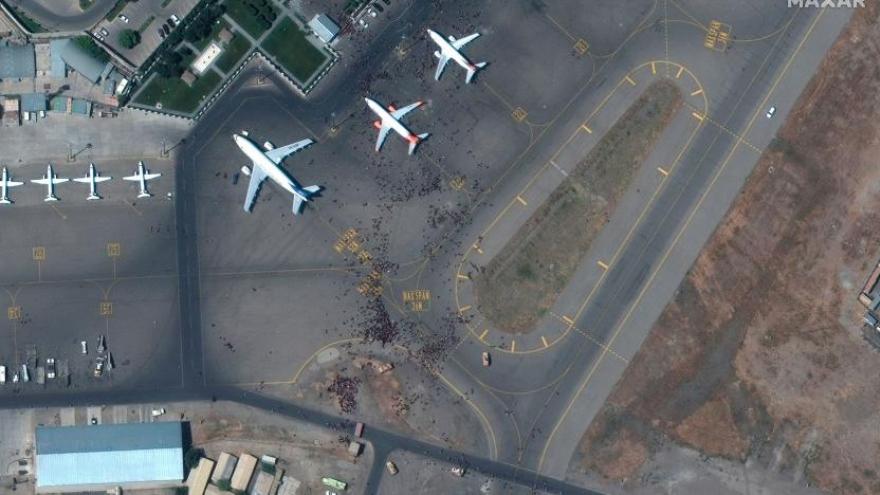 As reports of harassment and beatings at Taliban checkpoints continued to surface, the US Embassy in Kabul warned it could not ensure safe passage for Americans to the airport to escape Afghanistan, pictured swarms of people at Kabul International Airport, on Aug. 16.

(CNN) -- As reports of harassment and beatings at Taliban checkpoints continued to surface Wednesday, the US Embassy in Kabul warned it could not ensure safe passage for Americans to the airport to escape Afghanistan, despite the Pentagon underscoring alleged Taliban assurances that it will ensure safe transit.

Wednesday's alert from the diplomatic outpost, which has been relocated to the airport, stood in contrast to statements made by White House and Pentagon officials about the ability of civilians to access the airport to board evacuation flights out of the country.

The apparent disconnect on public messaging among the Biden administration's senior national security staff underscores the chaotic and rushed nature of the evacuation effort, which has been gaining steam in the past few days but still faces enormous logistical and security challenges.

A few hours later, Deputy Secretary of State Wendy Sherman told reporters at the State Department that "it appears the Taliban's commitment for safe passage for American citizens has been solid" but that "we have seen reports that the Taliban, contrary to their public statements and their commitments to our government, are blocking Afghans who wish to leave the country from reaching the airport."

But in a news briefing at the Pentagon that started while State was still briefing, Chairman of the Joint Chiefs of Staff Mark Milley told reporters that "through the State Department, the Taliban are guaranteeing safe passage to the airport for American citizens, that is, US passport holders," Milley said.

The State Department message about transit to the airport also stands in stark contrast to comments made by national security adviser Jake Sullivan on Tuesday, when he told reporters at the White House that the Taliban had committed to allowing safe passage for civilians to the airport.

US has surged personnel to airport

The US has surged diplomatic and military personnel into Hamid Karzai International Airport, transforming the country's sole international airport into a massive military bunker where US personnel fired shots around the perimeter to control crowds Wednesday.

Both Sherman and Milley said Biden administration officials have directly told the Taliban that the US expects them to clear the way for people to reach the airport. Sherman said the State Department's team in Doha, Qatar, which is meeting with Taliban officials, and "our military partners on the ground in Kabul are engaging directly with the Taliban to make clear that we expect them to allow all American citizens, all third country nationals and all Afghans who wish to leave to do so safely and without harassment."

Referring to the Taliban's checkpoints, Milley said, "We have gone back and emphasized that, that people who are trying to get to the airport, have the right credentials, need to be allowed through."

Milley said that if directed, US military in Kabul have the ability to extract Americans and take them to Hamid Karzai International Airport when asked by CNN's Barbara Starr.

Starr asked Milley if "international special forces there ... have the capability to extract" Americans and take them to the airport. In response, Milley said, "That would be a policy decision, and, if directed, we have capabilities to execute whatever we're directed."

Pressed on the issue, Austin said, "We're going to do everything we can to continue to try to deconflict and create passageways for them to get to the airfield." But again, he said the US military does not have the capability to "extend operations currently into Kabul."

"Nothing ... indicated a collapse of this army and this government in 11 days"

Milley also said the US government had no indication that the Afghan military and government would entirely collapse in the space of 11 days, adding that intelligence had warned a "rapid collapse" could occur within weeks, months or even years, but not days.

"There was nothing that I or anyone else saw that indicated a collapse of this army and this government in 11 days," Milley said, addressing varying reports on the failure of intelligence to predict the country's sudden fall to the Taliban.

"Central Command submitted a variety of plans that were briefed and approved by the Joint Chiefs of Staff, the secretary of defense and the President. These plans were coordinated, synchronized and rehearsed to deal with these various contingencies," Milley said.

"One of those contingencies is what we are executing right now," he said of the military's plan to operate in the chaos surrounding the airport.

US fired shots around perimeter of airport

Earlier Wednesday, Defense Department spokesman John Kirby confirmed that US personnel had fired some of the shots around the perimeter of the airport to control crowds.

US troops fired "on the airport side of the perimeter as crowd control measures, as nonlethal warnings, if you will," Kirby said during an off-camera Pentagon briefing.

Kirby confirmed these shots had not been fired at Afghans or "anybody else" but rather were "used as crowd control." When asked if the shots were rubber bullets because they had been described as nonlethal, Kirby said he could not confirm if rubber bullets had been used but that the shots were nonlethal "as in not shooting at people."

Speaking at the on-camera briefing with Milley, Austin said the Defense Department has dispatched "small military teams to two of the airport gates" to "assist the State Department consular efforts as they evaluate and process individuals seeking entry."

Austin said the Defense Department is focused on increasing the capacity of people and aircraft leaving the airport.

"We've flown several thousand since the 15th of August and our goal is to be able to increase our capacity going forward," he said.

Sherman said that "in the last 24 hours, US military flights evacuated approximately 2,000 more people. Over the last several days, we've processed more than 4,800 people for evacuation." She described "an enormously challenging and fluid situation" and "an all-hands-on-deck effort to ensure the safety of our personnel and citizens ... and organize the evacuation of thousands and thousands of Afghans."

"Shortly," she added, "we will invite more than 800 Afghan immigrant visa holders to board flights to the United States."

At the Pentagon, Kirby said that in the previous 24 hours, 18 C-17 military planes had lifted off from Kabul airport carrying around 2,000 passengers, including 325 American citizens.

He added that there are now 4,500 US troops at the airfield who are maintaining security and helping to facilitate the evacuation of American citizens, Special Immigrant Visa applicants and other at-risk Afghans.

Kirby also acknowledged that the takeoff of a US Air Force plane from the airport on Monday with Afghans clinging to the side of its airframe had resulted in "at least several fatalities."

The US Air Force Office of Special Investigations announced an investigation into the incident on Tuesday, but the announcement did not specify how many individuals had been killed.

"Clearly, we know just by visual evidence and by the Air Force's statement that there were at least several fatalities involved in that, but I don't want to get ahead of the Air Force's review in terms of hard numbers of what the total toll was," Kirby said.