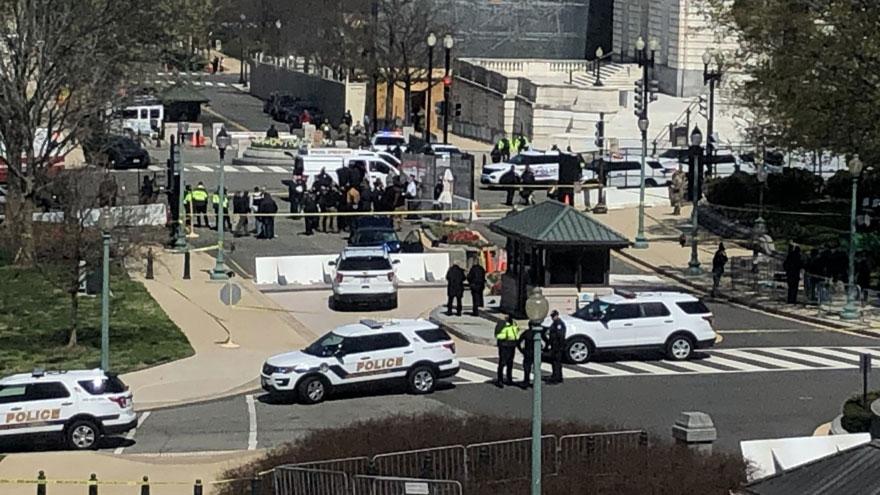 The US Capitol is on lockdown due to an external security threat on April 2.

(CNN) -- One US Capitol Police officer has died and another is injured after a suspect rammed a vehicle into a police barricade outside the Capitol building Friday afternoon, acting Capitol Police Chief Yogananda Pittman told reporters.

Pittman said the suspect in the attack has also died. The suspect was not on the radar of the US Capitol Police before the attack, but the attack does not appear to be terrorism-related, police said in an afternoon briefing.

Pittman added that the scene is still being processed, and the investigation is ongoing. The DC Metropolitan Police said there is no indication of an ongoing threat. Pittman said she will not release the name of the officer until the officer's family is notified.

A senior congressional aide and a US Capitol Police source told CNN that after the driver of the vehicle rammed his car into a barricade on Constitution Avenue, the driver exited the vehicle brandishing a knife. USCP responded, shooting the suspect and taking him into custody.

An email from the US Capitol Police, obtained by CNN, confirmed that sequence of events. The email stated Capitol Police officers shot the suspect after he rammed the barricade and exited holding a knife.

A law enforcement official told CNN at least one of the officers was stabbed.

"(US Capitol Police) is responding to the North Barricade vehicle access point along (Constitution) Avenue for reports someone rammed a vehicle into two USCP officers. A suspect is in custody. Both officers are injured. All three have been transported to the hospital," USCP said in a tweet Friday.

CNN has confirmed that the FBI Washington Field Office is providing support to the Capitol Police.

The incident comes as the security situation on Capitol Hill remains top of mind for many lawmakers despite a recent ramping down of some additional protective measures that were put into place after the January 6 insurrection.

Barbed wire fencing that surrounded the Capitol complex for months after pro-Trump rioters stormed the building has since come down and thousands of the National Guard troops who were deployed in response to the insurrection have since returned home, though thousands still remain in Washington due to lingering security concerns.

The National Guard was seen responding to Friday's attack, and later confirmed it had been deployed to the Capitol.

"The DC National Guard deployed a Immediate Response Force (IRF) composed of National Guard soldiers and airmen to the Capitol complex this afternoon to support the U.S. Capitol Police. Due to operational security, we cannot discuss further details regarding the IRF," the National Guard said in a tweet.

The long-term security posture at the Capitol has also become a topic of increasing debate in recent weeks as congressional committees continue to move forward with their investigations into failures around the January 6 attack.