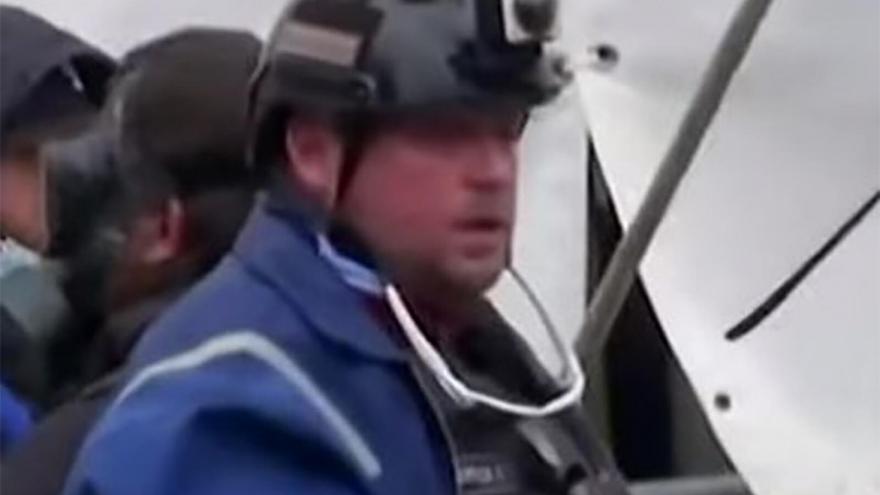 (CNN) -- Justice Department prosecutors say they have evidence that an alleged rioter who brought a gun to the US Capitol on January 6 was targeting both House Speaker Nancy Pelosi and then-Majority Leader Mitch McConnell.

According to a filing Thursday, Guy Reffitt, a member of the Texas Three Percenter militia, "specifically targeted at least two lawmakers -- the Speaker of the House, Nancy Pelosi, and then-Senate Majority Leader, Mitch McConnell -- whom he sought to physically remove or displace from the Capitol building."

Prosecutors aim to prove the allegation at Reffitt's trial, which is tentatively scheduled for late February. He will be the first January 6 defendant to go to trial, and is facing five federal charges. He has pleaded not guilty, and has been in jail since his arrest in January.

According to court documents, Reffitt drove to Washington, DC, days before the riot, carrying an AR-15 rifle and pistol in his car. Prosecutors say Reffitt wore body armor and carried his pistol and plastic cuff restraints on the Capitol grounds on January 6.

The assertion by prosecutors may further undermine efforts by some Republicans to whitewash the deadly insurrection and claims by former President Donald Trump that rioters posed "zero threat" to those inside the building.

Other rioters have been accused of hurling threats against lawmakers before, during, and after January 6. In the week after the 2020 election, Michael Lopatic, of Pennsylvania, allegedly posted photos online of birds he had shot on a hunting trip which he had named after prominent Democratic lawmakers. Garret Miller, of Texas, is accused of tweeting "Assassinate AOC" and wrote on Facebook about hanging a Black police officer. Mark Mazza, who is also charged with carrying a loaded firearm to the Capitol, allegedly told investigators that if he had found Pelosi that day, "you'd be here for another reason."

Reffitt's case gained national attention this summer when his son spoke publicly about how his father had threatened to kill family members if they turned him into the FBI. Both Reffitt's son and daughter testified against him in court and before the grand jury.

Reffitt's defense lawyer has downplayed his threats as just talk, and his daughter told a judge in March she thought Reffitt was being a "drama queen."