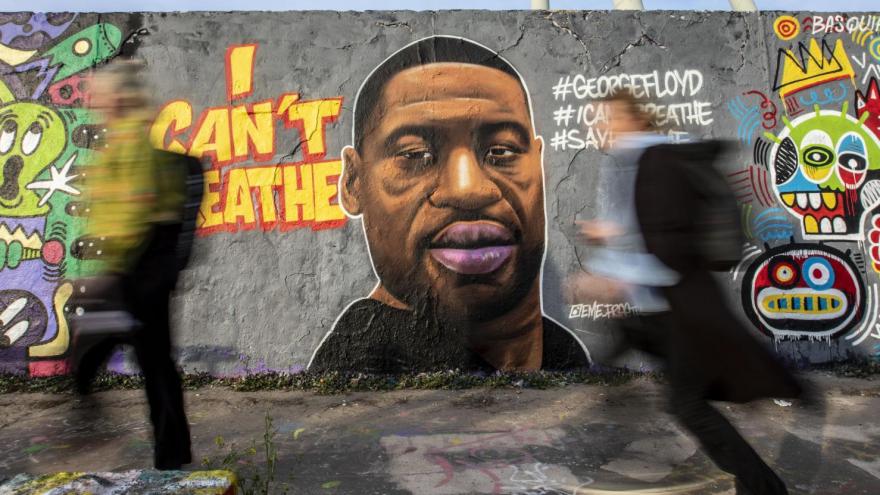 A mural of George Floyd painted by the artist eme_freethinker on a wall at Mauerpark in Berlin, Germany.

(CNN) -- They marched by the thousands in Houston. They called for a better America in Los Angeles. They sat in the streets in Chicago and in silence in St. Paul.

Protests continued Tuesday for an eighth night across the United States, with demonstrators peacefully gathering to shout George Floyd's name and to call for justice in the wake of his death at the hands of a now-jailed former police officer.

Several cities re-established curfews for Tuesday night in an attempt to stop the after-hours violence and looting of businesses.

Minneapolis, where Floyd died, New York City, Philadelphia and Washington DC, are among the cities with curfews.

The New York Police Department had arrested about 40 people as of 10 p.m. a number expected to increase, a law enforcement official told CNN.

In Atlanta, a protest was calm but after 9 p.m. police and National Guard began to sweep the streets to clear them. A CNN crew saw tear gas being used.

Police in Charlotte, North Carolina, said they used chemical agents to disperse a crowd after "being assaulted with bottles, rocks, and chemical agents." One person was arrested there and police later tweeted that a protester with a rifle was also taken into custody.

Many of the protests began in the afternoon and lasted hours.

Earlier in Houston, where a public memorial for George Floyd will take place next week, tens of thousands of people marched to City Hall to shout his name and call for justice after his death.

The marchers, who chanted "no justice, no peace" and "Peace on the left, justice on the right," walked or rode horses from Discovery Green park toward their destination, where organizers were scheduled to speak.

George Floyd's brother, Philonise Floyd, addressed the crowd asking for a peaceful protest. He told them to be steadfast in the quest for police reform.

"We're trying to break the cycle right now. We got this," he said.

There were protests in at least a dozen US cities.

"We want peace," Joseph Haynes, a demonstrator in Los Angeles, told CNN's Kyung Lah. "Look at all these wonderful people out here. Look at us. And this is not just black people."

Haynes also stopped to talk with a police officer to show solidarity with them and not a "system that has oppressed people for hundreds of years," he said.

About 24 hours after people were forcibly moved from a street within view of the White House, even more protesters gathered and stayed even as the 7 p.m. curfew in DC passed.

The mayor urged New Yorkers to protest "in the daytime hours and then please go home because we have work to do this evening to keep a peaceful city."

Declining to go into numbers, a senior NYPD official told CNN that there will be "enhanced deployment" tonight.

"The goal is to minimize risk to the public and maximize efficient use of resources," the official said.

Gov. Andrew Cuomo's office said Monday the number of NYPD officers on the street would double from 4,000 to 8,000.

The investigation will look into practices of the department for the last 10 years, he said.

A news release says the inquiry will try to determine whether police engaged in "systemic discriminatory practices towards people of color and ensure any such practices are stopped."

The department's Commissioner Rebecca Lucero will lead the investigation. She filed a civil rights charge Monday against the department, alleging Floyd's death was in violation of the state's Human Rights Act.

Floyd, 46, died last week after Minneapolis officer Derek Chauvin pressed his knee on Floyd's neck for more than 8 minutes, according to a prosecutor's statement of probable cause. His final words included "Mama" and "I can't breathe."

Three other officers who responded to the scene, two of whom helped restrain Floyd, were fired by the police chief, who said they were "complicit" in his death. They have not been charged with wrongdoing despite calls from the Floyd family and protesters.

On Monday, two different autopsies found that Floyd's death was a homicide. A public memorial service will be held for Floyd in Minneapolis on Thursday, according to a statement from National Action Network.

Officers shot and hit by vehicles

Floyd's brother Terrence Floyd spoke to those gathered in support of his brother Monday, delivering a simple message for those committing violence.

"He would not want y'all to be doing this," he said.

Not everyone got the message. In St. Louis, four officers were struck by gunfire during protests. Their injuries are non-life-threatening, Chief John Hayden Jr. said.

In Buffalo, New York, three law enforcement officers clearing the scene of a protest were injured when an SUV drove through a police blockade, New York State police said in a news release.

One of the more serious incidents happened in New York City, where a sergeant was hit by a car with such force that the officer flipped sideways in the air. The officer is in serious but stable condition with leg and head injuries, NYPD Lt. Thomas Antonetti said. The driver fled the scene.

There were about 700 arrests in New York City on Monday night for looting and other offenses, including attacks on officers, NYPD Commissioner Dermot Shea said.

Man charged after allegedly handing out explosives in Minneapolis

Today 76° Windy with a few clouds