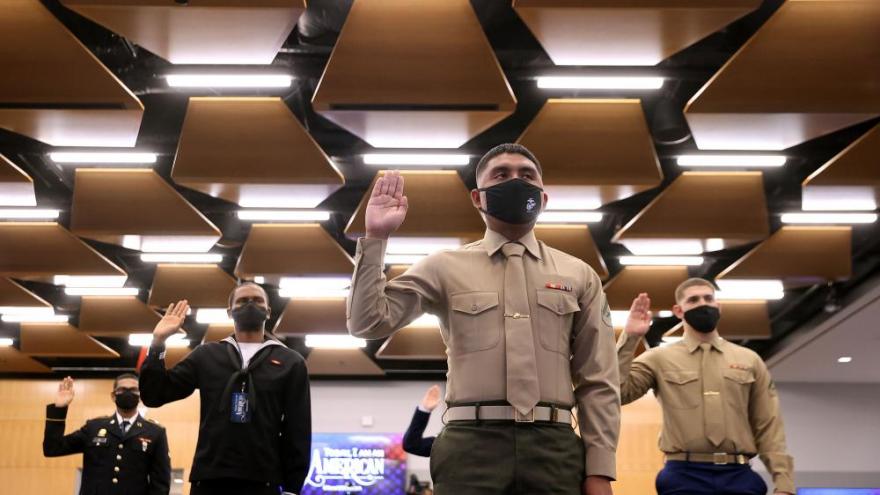 The number of people who became naturalized US citizens in the fiscal year 2021 was the highest in more than a decade, according to new data, surpassing the Trump administration-era high and rebounding after the pandemic had prompted office closures and service disruptions.

(CNN) -- The number of people who became naturalized US citizens rebounded in fiscal year 2021 after the Covid-19 pandemic previously had prompted office closures and service disruptions for US Citizenship and Immigration Services.

Around 808,000 people were naturalized during the fiscal year, which ended September 30, compared with 625,400 people in fiscal year 2020, according to data provided by the agency.

The uptick comes as the Biden administration has been encouraging eligible lawful permanent residents to apply for citizenship, but has not yet reached the high of the Trump era.

After struggles with processing and financial issues related to the Covid-19 pandemic, the agency has been able to ramp up naturalizations, USCIS Director Ur Jaddou told CNN.

"It is a tremendous value to the nation to have people that are lawful permanent residents become citizens, so we would like to encourage that," she said, speaking at a naturalization ceremony at the agency's headquarters on Tuesday.

In July, CNN first reported that the Biden administration planned to introduce an unprecedented effort to encourage eligible immigrants to apply for US citizenship, according to a USCIS official at the time.

The effort stems from one of President Joe Biden's early executive orders that called on federal agencies to develop "welcoming strategies that promote integration, inclusion, and citizenship."

"The idea is to find a whole-of-government way to reach out to people who are able to naturalize," the USCIS official previously said, adding that there are 9 million people in the US who are lawful permanent residents who may be eligible to apply for citizenship.

Efforts, for example, could include holding naturalization ceremonies at national parks to raise awareness, partnering with the US Postal Service to display promotional posters and engaging with the Department of Veterans Affairs and veteran service organizations to find ways to educate service members and veterans on citizenship, according to the strategy, titled "Interagency Strategy for Promoting Naturalization."

USCIS is working with 11 federal agencies to integrate and to promote naturalization, according to Jaddou, who said the agency's role in processing applications for naturalization is only one part of the effort.

Another ceremony will be held Wednesday with Homeland Security Secretary Alejandro Mayorkas in Baltimore.

Asked how the Biden administration's efforts contrast with those of the Trump administration, Jaddou said, "Number one is called public engagement."

"That is one of the biggest things that we have changed, is to ensure that we're working with the public in as many venues as possible," she said.

The agency is also looking at streamlining its forms, said Jaddou. "Some of them are just too long and and too difficult to understand."

The record for naturalizations was in 2008, with more than a million people becoming US citizens, an uptick that was attributed to upcoming fee increases and efforts to encourage eligible applicants to apply for citizenship.