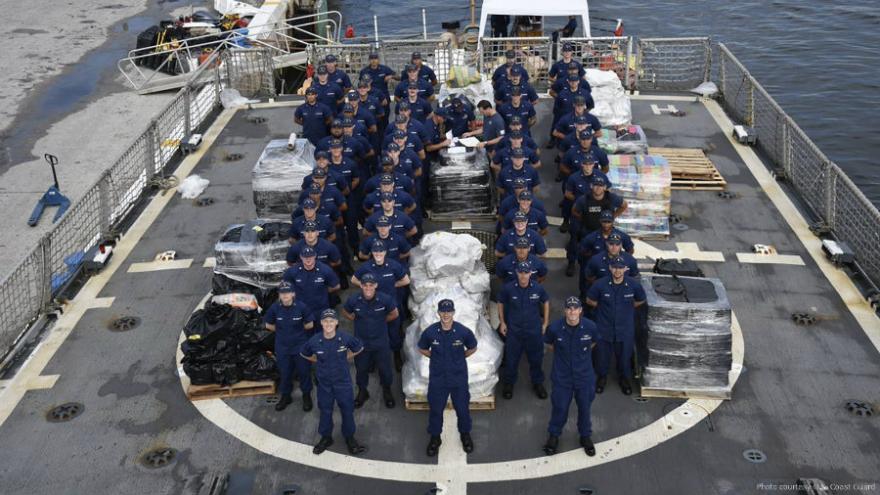 (CNN) -- A recent deployment in the Pacific Ocean proved very successful for a US Coast Guard crew: During their 80-day patrol they seized nearly 12,000 pounds of cocaine worth around $206 million.

The Coast Guard cutter Campbell returned to its homeport in Kittery, Maine, on Friday after the counter-narcotic patrol in the Caribbean and Eastern Pacific.

The Campbell intercepted suspected smuggling vessels six times, according to a statement from the Coast Guard.

The Campbell's commanding officer, Cmdr. Mark McDonnell, said he's "incredibly proud" of his team. The 29-year-old ship has a crew of 100.

The Cambell and another cutter, Active, seized the drugs off the coasts of Mexico, Central and South America, the Coast Guard said. The crew offloaded the drugs last week in Florida.

McDonnell said the presence of the Coast Guard and other law enforcement agencies is "essential to dismantling the crime networks that threaten the US with their illicit activities."

The crew detained 24 suspected smugglers during the patrol.

The Campbell's crew was assisted with MH-65 Dolphin helicopters from the Helicopter Interdiction Tactical Squadron unit, based in Jacksonville, Florida.

A photo shared by the Coast Guard shows some of the crew members standing around the massive cargo.