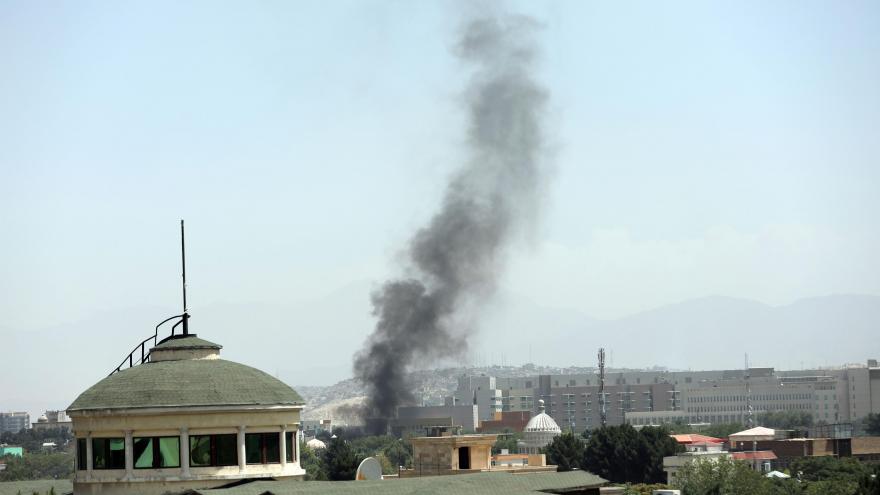 Smoke rises next to the U.S. Embassy in Kabul, Afghanistan, on Sunday, August 15. - Rahmat Gul/AP

(CNN) -- The United States is pulling out all US personnel from its embassy in Kabul over the next 72 hours, including top officials, two sources familiar with the situation told CNN on Sunday.

The withdrawal of embassy personnel marks a rapid acceleration of the process that had only been announced on Thursday, and is a situation that many State Department security officials expected would have to happen given the speed with which the Taliban has gained territory in Afghanistan in recent days.

Most of the American diplomats will go to the airport in Kabul, the capital, and then fly back to the US. A small number of core personnel, including the top US diplomat in the country, will remain at the Kabul airport for now, the sources said. This means that the US Embassy in Kabul will be shuttered -- at least for the time being -- by Tuesday.

The decision to pull diplomatic personnel out of the country comes as the Afghan government is in talks with the Taliban over the country's future as the militant group surrounded Kabul on Sunday after taking control of every other major city across the country in just two weeks.

The talks between the government and the Taliban signal a likely end, or transformation, of the embattled government of Afghan President Ashraf Ghani, and puts the militant group closer to the precipice of control over the entire country.

The President's authorization of 5,000 troops on Saturday included 1,000 who are already on the ground in country, according to a defense official. A battalion of 1,000 troops from the 82nd Airborne Division were redirected to Kabul, instead of their original standby position in Kuwait. The Pentagon had previously announced 3,000 additional troops were on their way, the defense official said.