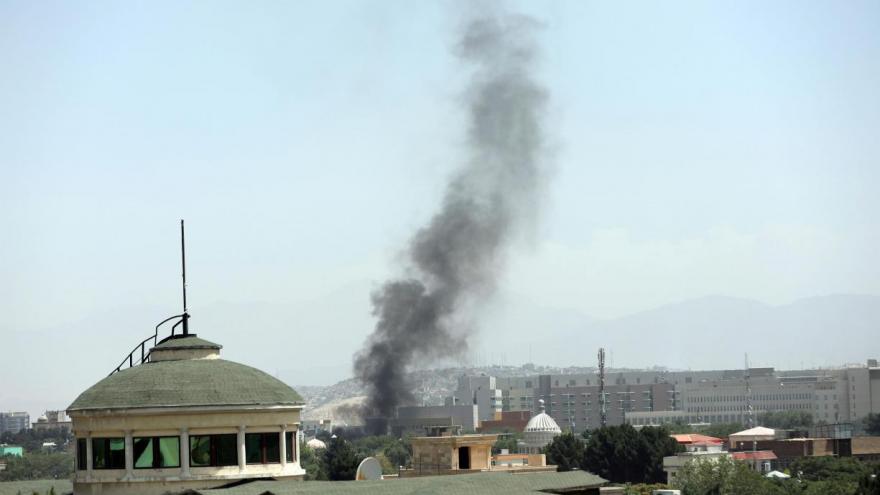 Smoke rises next to the U.S. Embassy in Kabul, Afghanistan, on Sunday, August 15.

(CNN) -- The American flag at the US embassy in Kabul was taken down Sunday, marking a final step in the evacuation of the diplomatic compound as the Biden administration rushed another 1,000 troops into Afghanistan to manage the sudden departure of embassy personnel and other staff days earlier than US officials initially projected.

The US scrambled to evacuate staff and top officials from its embassy in Afghanistan Sunday as Taliban fighters entered the city, senior Afghan government officials fled the country and gunfire was heard at Kabul airport, multiple sources told CNN.

As the situation deteriorated, Defense Secretary Lloyd Austin ordered the deployment of 1,000 more US troops into Afghanistan, rerouting them from their initial destination in Kuwait, a defense official told CNN. The new orders bring the total number of US troops expected in the country to 6,000.

The US bolstered its military posture in the country as Afghan officials handed over the Presidential Palace in Kabul to the Taliban, a transition carried live on the television network al Jazeera, which reported that three Afghan officials were present for the ceremony.

Early Sunday, two sources familiar with the situation told CNN that the plan was to pull all US personnel from the embassy in Kabul over the next 72 hours. Hours later, most US embassy staff had been moved to Kabul airport for flights out of the country.

By early Monday morning in Afghanistan, or 5 p.m. Sunday ET, the US had airlifted about 500 embassy staff from Afghanistan out of a total 4,000 employees -- US citizens and Afghans -- waiting for evacuation in the country, a defense official told CNN. The official said the 4,000 total did not include family members of Afghan embassy employees. The US plan for those family members wasn't clear and the State Department did not immediately respond to a request for comment.

The rush to the exits marked an unsettling, tragic end to the US presence in Afghanistan as the Taliban retook control nearly 20 years after the US invaded to avenge the terror attacks of September 2001. After an investment of around $2 trillion, some 2,400 American lives lost and thousands more wounded, a nation-building project that spanned Republican and Democratic administrations devolved in just a few days into a complicated and nerve-wracking rescue mission.

In a Sunday phone briefing, Austin told House lawmakers Sunday that the evacuation was a "highly dynamic and very risky operation," even as he and other senior US officials worked to project a sense of control.

"This is not Saigon," Secretary of State Antony Blinken told CNN's Jake Tapper on "State of the Union," when asked about President Joe Biden's July assertion that under no circumstances would US personnel be airlifted out of Kabul in a replay of the US withdrawal from Vietnam in 1975.

Blinken said on ABC that instructions to diplomats to destroy documents, US flags or other items that could be used in Taliban propaganda are "standard operating procedure." Echoing Austin's talking points, Blinken added that the evacuation "is being done in a very deliberate way, orderly way. It's being done with American forces there to do it in a safe way."

At the same time, the US military is considering the possibility of sending additional US forces to Afghanistan, according to a defense official and US official familiar with the ongoing discussions. Both officials caution no decision has been made.

The defense official said the "current plan" is that as long as any US diplomats maintain a presence at the airport, there will be a contingent of US forces there to protect them. But the official acknowledged that if the Taliban are essentially in charge, the "reality" of keeping diplomats and troops at the airport may not hold.

Gen. Frank McKenzie, head of US Central Command, arrived in the Persian Gulf region Sunday to directly oversee the situation in Afghanistan, according to the defense official. The official declined to publicly name McKenzie's location, but said the general is not in Afghanistan.

A military team was expected to arrive and set up its own air traffic control system at the airport in Kabul in order to increase the number of evacuation flights out of the airfield. This type of capability is routinely maintained by the Air Force so it can operate at airfields in remote or war zone environments.

"We are going to ramp up flights," the defense official said.

This official added that "the current situation is going south pretty fast" and that from the outset, in the view of some, "there was no assessment pessimistic enough."

With Biden at Camp David, the administration's most senior national security officials -- including Blinken, Austin, CIA Director Bill Burns and Director of National Intelligence Avril Haines -- shared their most recent assessments of the situation with the President by secure video teleconference.

Austin, Blinken and Chairman of the Joint Chiefs of Staff Gen. Mark Milley also spoke to House and Senate lawmakers, with Milley warning that the situation could create a greater counterterrorism threat to the US.

Milley said that terrorist groups like al Qaeda -- which was responsible for the September 11 attacks and given safe harbor in Afghanistan by the Taliban -- now may reconstitute in Afghanistan earlier than the two years that defense officials had previously estimated, according to a Senate aide briefed on the comments.

The rushed withdrawal of embassy personnel and the rapid military deployment to protect US personnel marks the acceleration of a process that had only been announced on Thursday.

On Sunday, the embassy issued a security alert saying that it was exploring options to help US citizens leave the country on charter flights. It also issued instructions to US citizens in the capital to shelter in place Sunday.

"The security situation in Kabul is changing quickly including at the airport. There are reports of the airport taking fire; therefore we are instructing U.S. citizens to shelter in place," the security alert said.

In another reflection of the widespread uncertainty, other US allies and NATO members, including Canada, France and Denmark, announced they were suspending embassy operations or moving them to the airport.

Most of the American diplomats who have been moved to the airport in Kabul were slated to then fly back to the US, sources told CNN. A small number of core personnel, including the top US diplomat in the country, will remain at the Kabul airport for now, the sources said.

While commercial flights out of Kabul were canceled Sunday, according to a diplomatic source, NATO Secretary General Jens Stoltenberg tweeted, "NATO is helping keep Kabul airport open to facilitate and coordinate evacuations."

As Taliban fighters assumed control of Kabul and its Presidential Palace, one of its units shared pictures of the Palace interior, seemingly intact, but empty and abandoned by Afghan officials, on an official Telegram account -- graphic evidence that the Afghan government had ceded control. A source at the Afghan presidential palace told CNN that eight or nine representatives of the Taliban's delegations from Qatar -- where talks for a solution to the conflict are ongoing -- were inside the palace as of Sunday morning.

A Taliban spokesman, Zabihullah Mujahid, said the Taliban had not wanted to enter Kabul "through military ways," but they were entering areas of the city where Afghan government officials and security forces had abandoned their posts "in order to avoid any looting and burglary in Kabul, and stop opportunists from harming the people."

Blinken defended Biden's decision to end the US' war in the country when pressed by CNN's Tapper on "State of the Union" Sunday.

"The fact of the matter is had the President decided to keep forces in Afghanistan beyond May 1 attacks would have resumed on our forces. The Taliban had not been attacking our forces or NATO during the period from which the agreement was reached to May 1," Blinken said, in reference to the May 1 withdrawal agreement the Trump administration had brokered with the Taliban.

"The offensive you are seeing across the country now to take the provincial capitals would have commenced. We would have been back at war with the Taliban," he added.

The secretary also noted that the US plans to "keep in place in the region the capacity to see any reemergence of a terrorist threat and to be able to deal with it."

Blinken would not say if the US has offered the Taliban anything in exchange for promise of safe passage for Americans and others out of the country, telling Tapper that: "We haven't asked the Taliban for anything. We've told the Taliban that if they interfere with our personnel, with our operations as we're proceeding with this drawdown, there will be a swift and decisive response."