US could see millions of coronavirus cases and 100,000 or more deaths, Fauci says 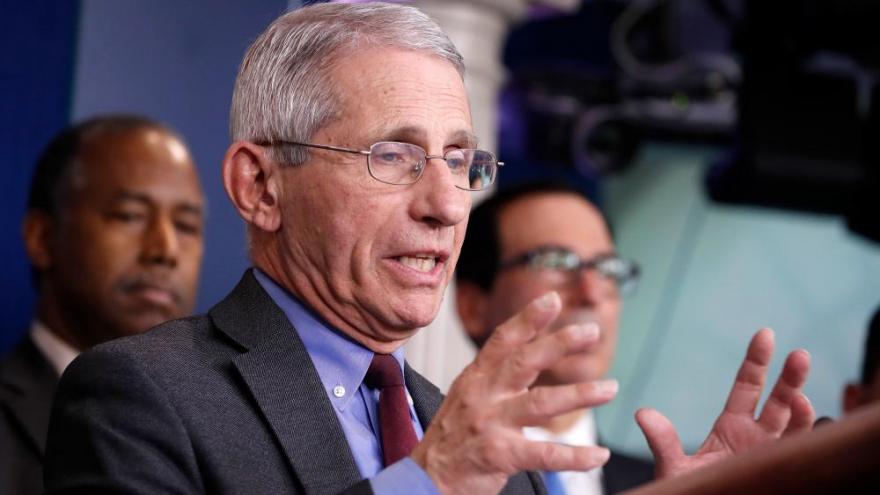 Dr. Anthony Fauci, director of the National Institute of Allergy and Infectious Diseases, said that based on models, the United States could eventually see 100,000 or more deaths from the novel coronavirus, which has already claimed more than 2,000 American lives as cases surge across the US.

(CNN) -- The nation's top infectious disease expert said Sunday that based on models, the United States could eventually see 100,000 or more deaths from the novel coronavirus, which has already claimed more than 2,000 American lives as cases surge across the US.

"Whenever the models come in, they give a worst-case scenario and a best-case scenario. Generally, the reality is somewhere in the middle. I've never seen a model of the diseases that I've dealt with where the worst case actually came out. They always overshoot," Dr. Anthony Fauci, a key member of the White House's coronavirus task force, told CNN's Jake Tapper on "State of the Union."

The comments come as the number of reported coronavirus deaths doubled to more than 2,000 nationwide in two days. The US has the most confirmed cases worldwide, with more than 121,000 as of Saturday morning.

During a Sunday evening news conference, President Donald Trump said that, based on models that the coronavirus outbreak could bring 100,000-200,000 deaths in the US, his administration would "have done a good job."

Fauci and other experts have said the crisis will get worse before it improves, and the recent uptick in cases has caused severe supply shortages for hospitals around the country, especially in New York, the state with the highest number of cases nationwide.

Numerous hospitals across the country expect to run out of beds within two weeks as cases continue to rise. New York City Mayor Bill de Blasio told CNN Sunday that his city has enough supplies to only last a week.

"We have enough supplies to get to a week from today with the exception of ventilators. We're going to need at least several hundred more ventilators very quickly. But we have otherwise the supplies to get to next Sunday," de Blasio told Tapper on the same program. "We are going to need a re-enforcement by Sunday, April 5 in all categories, especially ventilators but in other areas as well. And personnel is becoming more and more the issue."

In an effort to curb the spread of the virus, various cities and states -- including New York -- have implemented stay-at-home orders for their residents, which have now impacted at least 215 million Americans.

On Saturday, the Centers for Disease Control and Prevention issued a travel advisory to New York, New Jersey and Connecticut, urging residents of the three states -- which have a significant amount of the cases in the country -- to "refrain from nonessential domestic travel for 14 days effective immediately."

This story has been updated to include Trump's statement on Sunday.

CLARIFICATION: The headline and this story have been updated to better convey that Dr. Anthony Fauci was offering a possible estimate based on his interpretation of the coronavirus models.