US days from completing formal Afghanistan withdrawal but 1,000 troops could remain 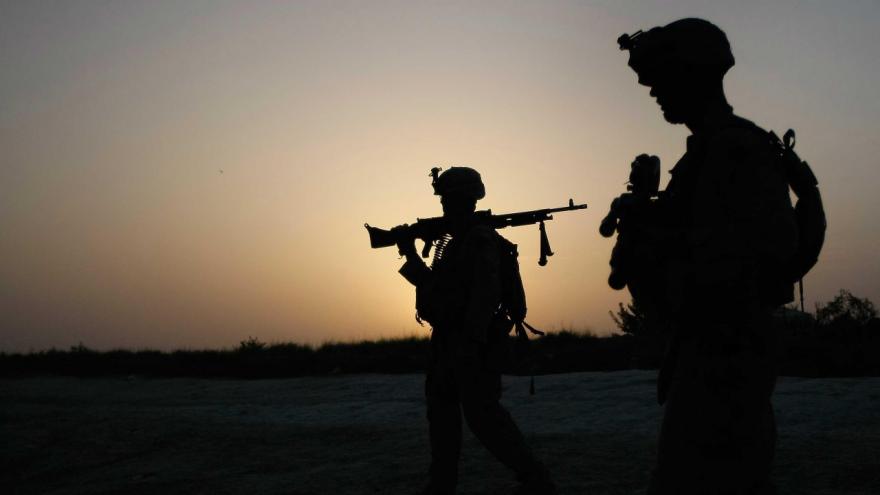 (CNN) -- The US could complete its troop withdrawal from Afghanistan within days, according to multiple US officials, making this a critical week in President Joe Biden's campaign to end America's longest war even as US military officials warn the country could devolve into civil war.

A formal conclusion this week to the US military withdrawal, or retrograde, would mark an astonishingly quick end to a process that Biden initiated in April when he ordered the military to leave by September 11. As many as 1,000 US troops could remain in the country after the formal withdrawal to assist in securing the US Embassy in Kabul and the city's airport, a senior administration official told CNN, and it is now unclear how long NATO troops will remain.

"This week could be a critical week in the withdrawal and end of the retrograde process," a defense official told CNN.

Pentagon spokesman John Kirby said the US withdrawal will not necessarily mean the end of NATO's Resolute Support mission in Afghanistan, despite NATO's decision in April to start and complete its own troop drawdown within a few months.

"It is my understanding with the completion of the retrograde of US forces, retrograde, withdrawal, of US forces from Afghanistan, with accepting, of course, whatever is left behind to protect our diplomatic presence, that that does not necessarily mean the end of Resolute Support," Kirby told reporters Tuesday. He added, "Really, that is a question better posed to NATO."

US officials say there were some 2,500 US troops in Afghanistan, plus hundreds of additional special forces who are not publicly acknowledged, when Biden made his decision in April to withdraw them.

CNN has previously reported that about 650 of those troops will provide security for the US Embassy in Kabul. The rest are expected to be at the international airport in Kabul to provide additional security until a Turkish military presence at the airport is finalized.

As the Taliban take control of districts across the country, US intelligence assessments have suggested the country's civilian government could fall to the militant group within months of US forces withdrawing. The top US general there, Austin Miller, warned Tuesday that the worsening violence could lead to civil war, according to news reports.

"Civil war is certainly a path that can be visualized," Miller told The New York Times in an interview. "That should be a concern for the world."

Biden acknowledged the growing challenges last Friday during a visit from President Ashraf Ghani, noting the "senseless violence" and saying, "It's going to be very difficult," but he is not rethinking his plans to withdraw US troops. White House press secretary Jen Psaki said Tuesday, the President's view remains unchanged that it is time to end the war and that prolonging the US presence would just put American troops at heightened risk.

"The decision the President made to withdraw troops from Afghanistan is consistent with his view over the last 20 years about the war," Psaki told reporters aboard Air Force One on Tuesday.

"But he also made that decision because it was made clear, given the timeline set by the prior administration, that if we did not withdraw our troops, US men and women would be facing fire on the ground," she said. "And that was not something, as the commander in chief, he felt was acceptable. And hence we are on this timeline we are on, by September."

Psaki made reference to the intelligence assessments about Afghanistan's security on Tuesday and said the US remained committed to retaining "a presence on the ground" to guard diplomatic facilities.

Biden promised Afghan leaders that the US will continue to provide humanitarian support and security assistance, but Psaki said the President felt he had little choice in withdrawing troops given Taliban threats against them based on the agreement signed under former President Donald Trump that foreign forces would withdraw by May 1.

Now US officials are adamant that the American combat presence and the advise-and-assist mission inside Afghanistan will end within days. The US continues to maintain a long-standing helicopter presence at the airport, but virtually all fixed-wing fighter aircraft are now out of the country.

That also poses challenges because if there is a security crisis, commanders will have to decide if they want to risk putting pilots over Afghanistan with limited helicopter resources should they go down and need to be rescued.

Even though the US military mission in Afghanistan is about to end, the need to protect Kabul airport means it is possible that the formal NATO mission known as Resolute Support will continue for an undetermined period. The US believes Turkey will want the umbrella of a NATO mission in order to continue their security presence at the airport.

The airport has long been considered a vital element in Afghanistan's security picture as it is the major point for international air traffic. If the airport cannot safely remain open, nations including the US would have no choice but to withdraw their diplomatic staff and shutter their embassies.

Asked on Tuesday about the presence of US troops at the airport, Kirby said that the US was working that out.

"What that is going to look like going forward, we're still working out. The main point I'm trying to state is that whatever US troops remain in Afghanistan, after the withdrawal is complete, are there to protect our diplomats and preserve our ability to have a diplomatic presence there, because the President has been very clear that he wants to keep that embassy open and keep the programs of that embassy in play," Kirby said.

With the possibility that the NATO operation might not formally end soon, one key question will be whether Miller, the four-star general who also serves as Resolute Support commander, stays in Afghanistan -- a decision for Biden to make, officials say.

The final days of the US withdrawal are almost entirely shielded from public view, given concerns that the diminishing numbers of US forces could be increasingly vulnerable to an attack by the Taliban or even al Qaeda or ISIS fighters.

The military has already sent home about 900 C-17 air transport loads of materiel. Some 16,000 pieces of equipment will be disposed of by the Defense Department, most of which is not military-grade major equipment.

Some vehicles and weapons have been sent home, while some equipment of limited value to the US military is being destroyed in place and some equipment in all categories has been turned over to Afghan forces.

One of the final acts of the US military is expected to be a handover of the massive Bagram air base, north of Kabul, to the Afghan government before a group of several hundred forces then depart the country by air.