US declines invitation to Russia-led talks on Afghanistan 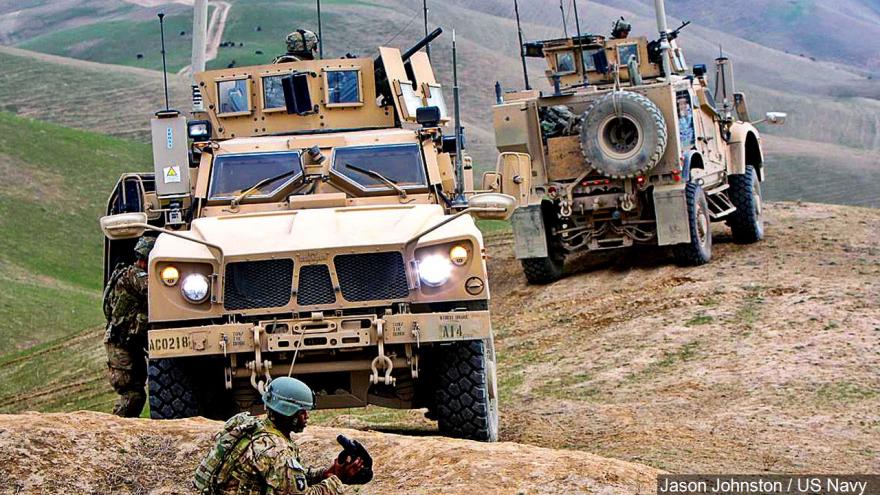 WASHINGTON (AP) — The United States has rejected an invitation to join Russia-led talks on Afghanistan because they are unlikely to help bring peace, a State Department spokesman said Wednesday, as the Trump administration prepared to appoint a diplomatic veteran as a new special envoy for the war-battered nation.

Russia said that the Taliban will be joining the Sept. 4 talks in Moscow, along with representatives of several neighboring countries. It will be one of the insurgent group's biggest diplomatic forays since the 2001 U.S.-led invasion of Afghanistan.

Afghan Foreign Ministry spokesman Sibghatullah Ahmadi told The Associated Press in Kabul that the government will not attend the meeting in Moscow, saying the peace process should be Afghan-led. He also said that "a peace process without the cooperation of the Afghan government would not be successful."

The State Department official said that as a matter of principle, the U.S. supports Afghan-led efforts to advance a peace settlement. And, based on previous Russia-led meetings on Afghanistan, the Moscow talks are "unlikely to yield any progress toward that end." The spokesman was not authorized to be quoted by name and requested anonymity.

That decision comes as the Taliban escalates attacks across Afghanistan. It has refused direct talks with Kabul, even as it seeks to raises its diplomatic profile in the region and calls for talks with the U.S. which it views as the real power behind the Afghan government. The insurgent group has yet to respond to President Ashraf Ghani's offer earlier this week of a conditional cease-fire for the duration of the Eid al-Adha religious holiday that began Tuesday.

Secretary of State Mike Pompeo intends to appoint a former U.S. ambassador to Afghanistan, Zalmay Khalilzad, to a special envoy post that would deal with the Afghan-Taliban peace process and Afghanistan's integration into the administration's Indo-Pacific strategy, according to two U.S. officials and a congressional aide briefed on the plan.

Khalilzad, who did not respond to queries about his potential new role, is expected to visit South Asia soon, according to the officials, who were not authorized to publicly discuss personnel matters and spoke on condition of anonymity.

A native of Afghanistan who was educated at the American University in Beirut and the University of Chicago, Khalilzad is a diplomatic veteran in Republican foreign policy circles and has also served as U.S. ambassador to Iraq and the United Nations. He was considered for secretary of state by the Trump transition team, notably after introducing then-candidate Donald Trump at his first major foreign policy speech during the campaign.

Despite escalating violence in Afghanistan, the top U.S. commander there said Wednesday that the U.S.-led coalition sees hope in Taliban statements in recent months indicating interest in a negotiations to end the 17-year war, and Afghan public and religious clerics' desire for peace. He contended that could lead to political reconciliation.

"We have an unprecedented window of opportunity for peace now," Gen. John Nicholson told Pentagon reporters from Kabul. His comments came just a day after rockets slammed into the heart of Kabul as Ghani delivered a speech for the Eid holiday, highlighting the precarious security even in the heavily protected capital.

Nicholson did not address the Russia talks. U.S.-Russian ties are increasingly strained. Washington has eyed Russian engagement in Afghanistan and its links to the Taliban with suspicion. Moscow says it is encouraging the insurgents to abandon hostilities and engage in a dialogue with the Afghan government.

Nicholson, who is slated to turn over command of the war next month, said the Taliban launched major assaults to take control of two provincial centers this year, and after tough battles the Afghans regained control. But he also acknowledged that the military campaign led by the Afghans and backed by the coalition is largely at a stalemate, and that the Afghan government has made little progress taking back additional population centers from Taliban control.

Nicholson took over the war effort in March 2016. In May of that year, 34 percent of Afghanistan's districts were contested or under militant control or influence, compared with 44 percent as of May 2018, according to U.S. military figures. He will leave as the longest-serving U.S. commander of the coalition.

Nicholson's time in charge included a key reversal in U.S. policy on the war -- stretching from the troop drawdown ordered in the final years of the Obama administration through President Donald Trump's endorsement last summer of a new strategy to increase U.S. and coalition presence, beef up the training and push for reconciliation.

Nicholson said that the Afghan Air Force and special operations units are growing in numbers and abilities, and that progress will have an increasing impact over the coming year.