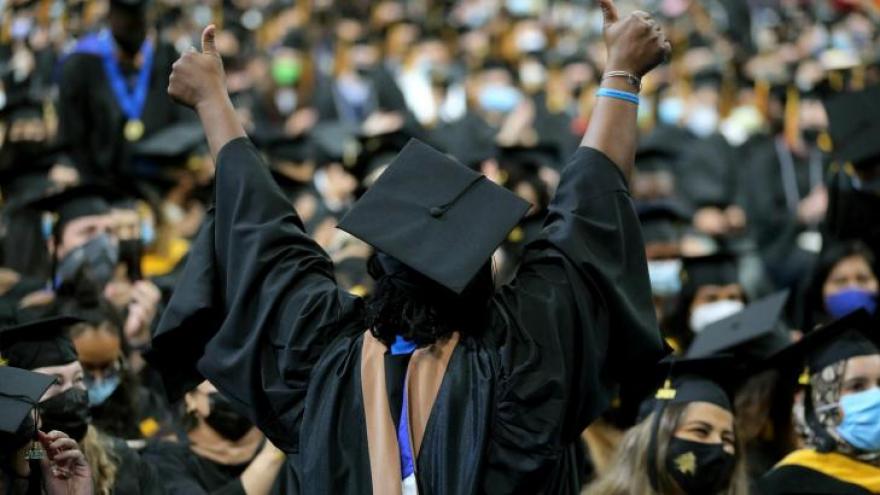 The US Department of Education announced major changes Wednesday to a federal student loan forgiveness program that the agency says could bring relief to thousands of borrowers working in government and nonprofit sectors. An graduating army veteran, center, is shown here being recognized for her service during the 53rd Commencements of the University of Massachusetts Boston at TD Garden in Boston, on Aug. 26, 2021.

(CNN) -- The US Department of Education announced major changes Wednesday to a federal student loan forgiveness program that the agency says could bring relief to more than 550,000 borrowers working in government and nonprofit sectors, including around 22,000 borrowers who will automatically be eligible for student loan forgiveness without needing to take additional steps.

Through the Public Service Loan Forgiveness program, the government forgives remaining federal student loan debt for qualifying public-sector workers after they have made monthly payments for 10 years.

But the program has long been criticized for being difficult to navigate, with borrowers receiving little help from their loan servicers, the companies that handle billing and other services. Many borrowers have said they found out they weren't eligible for forgiveness only after making what they thought were a decade's worth of qualifying payments.

In an announcement Wednesday, the Education Department said it will "restore the promise" of the debt relief program through a series of actions that will be implemented "over the coming months," according to an agency memo.

These actions include offering a time-limited waiver authorizing "all prior payments" from student borrowers to count towards the program, including loan types and payment plans that didn't previously qualify for forgiveness. This waiver will continue through October 31, 2022, the memo said.

More than 1 million borrowers have made at least one qualifying payment, but only a small percentage of those enrolled have received forgiveness. Roughly 5,500 people have seen their debt wiped away, according to the latest government data.

This waiver is one part of an effort aimed at improving the public service loan program that has been riddled with problems in the years since it was signed into law by then-President George W. Bush in 2007. These issues include confusion about eligibility requirements and the correct types of federal student loans and repayment plans, as well as instances of miscommunication between the Education Department and the loan servicers, and between the servicers and borrowers.

"Borrowers who devote a decade of their lives to public service should be able to rely on the promise of Public Service Loan Forgiveness," said Education Secretary Miguel Cardona in a statement Wednesday. "The system has not delivered on that promise to date, but that is about to change for many borrowers who have served their communities and their country."

"These actions will help identify and address servicing errors or other issues that have prevented borrowers from getting the PSLF credit they deserve," the agency said in a press release.

A commitment to military service members

"Next year, the Department will begin automatically giving federal employees credit for PSLF by matching Department of Education data with information held by other federal agencies about service members and the federal workforce," the agency stated.

For military service members, time spent on active duty will be credited towards the program, even if loans were on deferment or forbearance. "Federal Student Aid will develop and implement a process to address periods of student loan deferments and forbearance for active-duty service members and will update affected borrowers to let them know what they need to do to take advantage of this change," according to the memo.

The Education Department also pledged to initiate an "extensive outreach campaign" to borrowers, streamline the application process and make longer-term improvements to the program through the rulemaking process going forward.

More than 200 organizations, including the nation's two largest teachers' unions, are calling on the administration to create a simpler path to cancel debt for anyone who has worked in the public sector for a decade or more.

Some members of the Democratic Party, including Senate Majority Leader Chuck Schumer of New York and Sen. Elizabeth Warren of Massachusetts, have repeatedly called on the Biden administration to go further and cancel student debt of up to $50,000 for every borrower.

But Biden has so far resisted those calls from within his party and instead has focused on making changes to existing programs, like one that provides debt relief for those defrauded by for-profit colleges and another that wipes away the loans of those who are permanently disabled.

Biden has also extended the pandemic-related pause on federal student loan payments until January 31. Borrower balances have effectively been frozen for more than a year, with no payments required on federal loans since March 2020. The relief is even more significant for those seeking Public Service Loan Forgiveness. They are receiving credit toward the 10 years of required payments as if they had continued to make them during the pandemic, as long as they are still working full time for qualifying employers.