US expected to withdraw from another major arms treaty 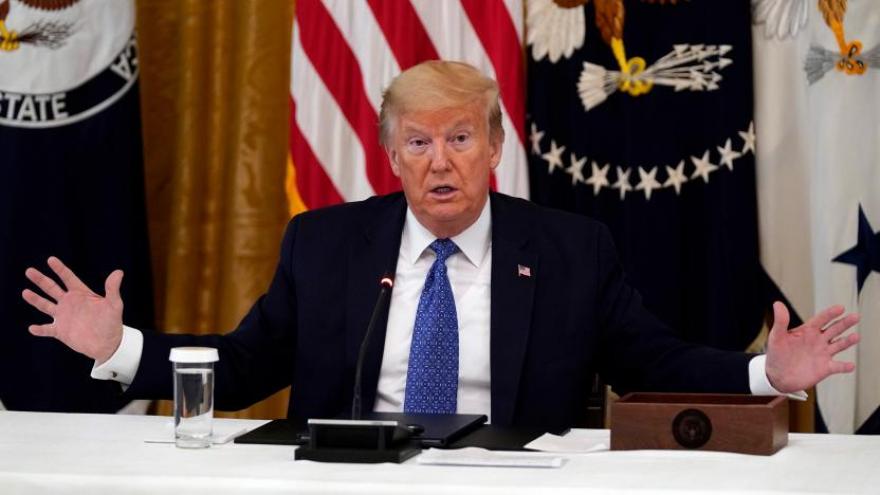 President Donald Trump speaks during a Cabinet Meeting in the East Room of the White House, Tuesday, May 19, 2020, in Washington.

(CNN) -- The Trump administration is preparing to withdraw from the Open Skies Treaty that was designed to reduce the risk of military miscalculations that could lead to war, making it the latest major arms control treaty that the US will abandon under President Donald Trump.

An announcement could be made tomorrow, an administration source tells CNN.

The treaty which was signed in 1992 allows member countries to conduct short-notice, unarmed, reconnaissance flights over the others' country entire to collect data on military forces and activities.

It was part of a broad web of arms control agreements meant to ensure stability and predictability on the European continent and reduce the risk of misunderstandings that could spiral into conflict by ensuring transparency.

The New York Times was first to report a final decision has been reached.

European allies, who have lobbied for the US to remain in the treaty, see it as a central part of their security infrastructure and the US decision to withdraw will likely add to the strain in transatlantic relations, analysts say.

The President, and many officials in his administration, have criticized the idea that the United States should be bound by international agreements. But analysts said discarding another agreement will potentially deepen global instability.

The Trump administration has already pulled out of an Intermediate Range Nuclear Forces Treaty and has set out conditions to renew the last remaining nuclear arms pact with Russia -- the NEW Start Treaty -- that experts and analysts say all but guarantee it will not be extended.

The Open Skies Treaty is part of "a set of reinforcing documents which create stability and predictability in and around Europe," said Jon Wolfsthal, director of the Nuclear Crisis Group at Global Zero. "Trump and his advisers have been systematically destroying those agreements in part because of Russian noncompliance, but when you look at the Trump approach, it's 'tear it down and don't put anything in its place and at times, make it harder for people to put anything else in its place.'"

"This is about the overall neglect of a proven tool of securing American and allied interests," Wolfsthal said.

The US has accused Russia of not complying with the treaty. In early March, Amb. Jim Gilmore, the US Ambassador to the Organization for Security and Co-operation in Europe (OSCE), said that the administration was seeking "reciprocity" from Moscow on the agreement.

The US has also in the past accused Moscow of imposing restrictions on flights near its exclave of Kaliningrad, an area between Poland and Lithuania where the Russian military maintains a robust presence.

According to the State Department, the treaty "is designed to enhance mutual understanding and confidence by giving all participants, regardless of size, a direct role in gathering information through aerial imaging on military forces and activities of concern to them."

Last year Trump signed a document signaling his intent to withdraw, according to people familiar with the decision, but discussions were still ongoing at the time.

European nations, including Ukraine, have pushed to preserve the treaty, seeing it as an integral to their national security. Some analysts say the treaty, which was designed to boost confidence that countries aren't planning an attack, was a driving factor in the Russian decision to invade Ukraine with a smaller military force that would be less noticeable from the air.

European nations say any disputes over Russian compliance should be addressed through negotiations. Trump's former national security adviser John Bolton, a longtime skeptic of arms-control agreements, and his allies within the administration have challenged Russia's claims of compliance. Before he left his post, he urged Trump to sign the document signaling the US intention to withdraw, two of the US officials said.