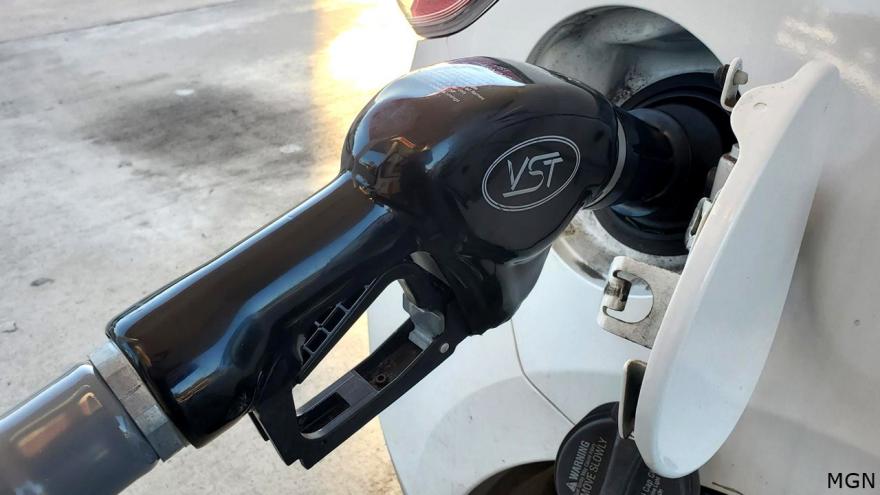 (CNN) -- US drivers have never paid this much for gasoline. The price for a gallon of regular gas now stands at $4.17, according to AAA.

That breaks the previous record of $4.11 a gallon that has stood since July 2008.

As Russia continues its military offensive in Ukraine, gas prices are rising faster than they have since Hurricane Katrina slammed into oil platforms and refineries along the US Gulf Coast in 2005.

Gas prices rose 10 cents since early Monday, gaining three of those cents overnight, according to the Oil Price Information Service, the firm that collects and calculates prices for AAA. The price data is calculated on a dynamic basis with pricing information from 140,000 US gas stations. OPIS confirmed Monday evening that a new record of $4.14 a gallon had been reached. But enough stations raised their prices further later Monday and early Tuesday to lift the average to $4.17.

Gas price spikes won't be stopping any time soon, said Tom Kloza, global head of energy analysis for the OPIS. Wholesale gasoline prices rose between 1 cent to as much as 12 cents a gallon in trading Monday in different markets across the United States. Those increases will be passed onto to drivers at the pump in relatively short order.

"I think we'll hit $4.50 a gallon before it turns around," said Kloza. "The risk is how bad this gets, how long this goes on. Even $5 a gallon nationwide is possible. I wouldn't have predicted that before the fighting started."

Why gas prices are surging

Russia is one of the world's major oil exporters, with most of its output going to Europe and Asia. Russian oil made up only 2% of US imports in December, according to Energy Department data. But oil is priced on global commodity markets, so the impact is felt everywhere.

The sanctions placed on Russia's economy following the invasion have so far exempted oil exports. But traders have been reluctant to purchase Russian oil because of sanctions on the country's banking sector. Many are also worried about finding oil tankers willing to dock in Russian ports.

The Biden administration said it is mulling a US ban of Russian oil imports. That probably would have limited impact on global or domestic prices since so little is being shipped to the United States. But there is pressure building for a formal Russian oil ban by European countries and Japan. If that happens, or if Russia itself were to halt oil shipments to retaliate against Western sanctions, that would have a greater impact on global oil markets.

That's what investors who are bidding on contracts for future deliveries of oil are betting could happen, which has been driving up the price of crude, Kloza said.

"If this becomes a real ban, not just a de facto ban, the concern is it's going to last longer," he said.

Where gas is most expensive ... and cheapest

In some parts of the United States, $4 a gallon gas remains rare. A large swath of central states, from North Dakota south to Texas, had averages in Tuesday's reading from AAA no higher than $3.86 a gallon.

But prices are rapidly increasing everywhere. The lowest statewide average is in Oklahoma, where unleaded stands at $3.72 a gallon. But that's up 42 cents, or 13%, in the last week.

As of Monday morning, gas was $4 or more in 28 states, plus Washington, DC. All of the East Coast states other than South Carolina, as well as the three West Coast states, Nevada, Arizona, New Mexico, Utah, Idaho, Illinois, Indiana, Michigan Alaska and Hawaii had statewide averages at or above $4. And it is likely that other states will cross the $4 a gallon mark soon, as South Carolina, West Virginia and Alabama are all within a couple of cents from that mark in Tuesday's reading.

The highest prices are in California, where the statewide average stood at $5.44 a gallon.

The rapid increase in gas prices is putting a real squeeze on many household budgets. It comes at an unfortunate time as overall inflation is up 7.5% over the last 12 months, the biggest year-over-year gain in consumer prices in nearly 40 years. Gasoline stations advertise prices in large numbers that are much more visible for consumers than many other prices.

The average US household uses about 90 gallons of gas a month. So just the 63-cent increase in the average price since the start of the war in Ukraine will cost that typical household about $55 more a month than they were spending on gas before this latest spike.

And it's not as if prices were low before this recent surge in gas prices. A year ago, the average price for a gallon of regular stood at $2.77 a gallon, so drivers are paying $1.40 a gallon more now. That comes to nearly $126 a month more, or about $1,500 a year, if prices stay that elevated for that long.

Still the $4.11 record that was set in 2008 would be the equivalent to $5.25 a gallon in today's dollars when adjusted for inflation. And vehicles as a group are more fuel efficient today than they were in 2008, with far more electric and plug-in hybrid vehicles, and better fuel economy overall than the fleet of cars on the road 14 years ago.